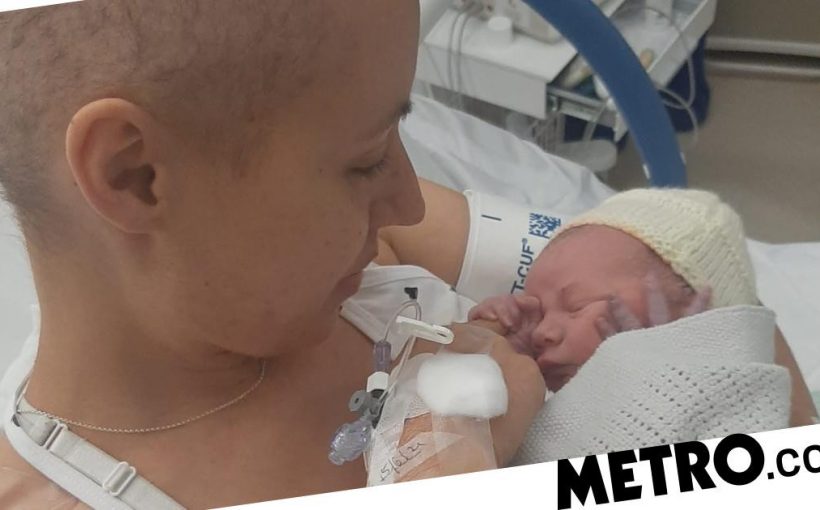 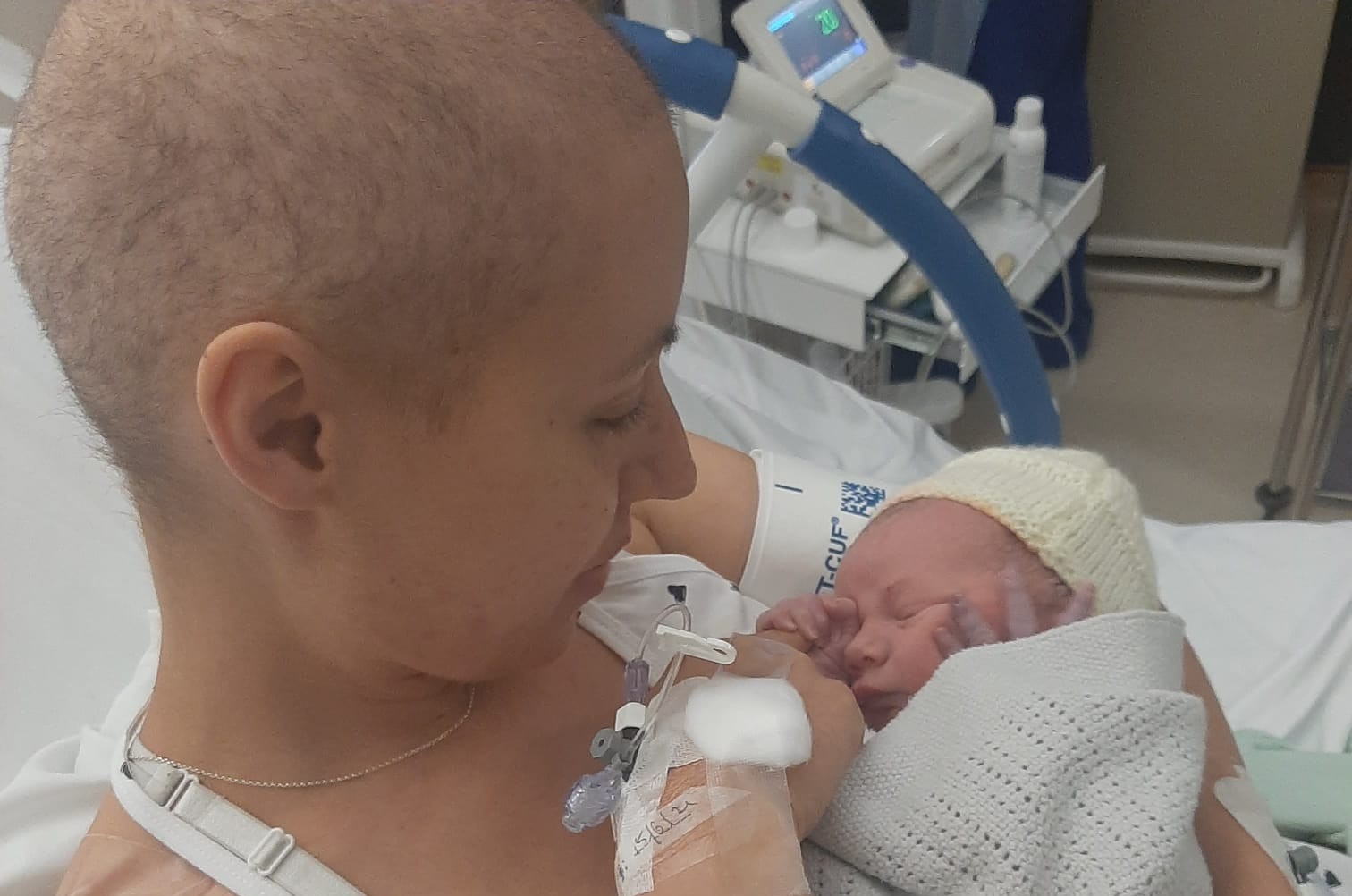 In the space of just one week, I had two ultrasounds – one to tell me the sex of my baby and another to confirm my breast cancer diagnosis.

My partner and I first found out I was pregnant in October last year and we were beyond excited. We were thrilled to be welcoming a sibling for our four-year-old daughter, Ava, and everything seemed to be running smoothly throughout the first few months of the pregnancy.

Then – at about 18 weeks – I was watching TV one night and randomly itched my breast. In doing so, I felt a lump and started to become slightly concerned.

Was it just my body changing due to the pregnancy or was it something more serious? I actually work for Macmillan Cancer Support so I know firsthand that you can never be too careful with getting these things checked out. I tried not to worry but fear of the worst was in the back of my mind.

Without hesitation, I booked a doctor’s appointment for the next day and was advised by my GP that it was probably just pregnancy-related and that I should monitor it for the next few weeks. I didn’t exactly feel reassured so with the work that I do in my job at the back of my mind, I insisted that I wanted to be put forward to the breast clinic.

My GP obliged and a week later, I had my scans and biopsy done. At the time, I honestly thought it would just be pregnancy-related or potentially a cyst – I was 32 years old with no history of breast cancer in my family so a diagnosis like that wasn’t seriously on my mind.

Throughout that week, I couldn’t stop myself from thinking about whether I’d be allowed to have cancer treatment while I was pregnant. So I looked it up online and was surprised to find out that it’s possible.

At the time, I wasn’t worried about the health of the baby and I was reassured that something could be done if it came to it.

During my screening, I was told that my partner, Tom, wouldn’t be allowed to be with me when I got my results because of Covid-19 restrictions. But actually, the night before my follow-up appointment a week or so later, I got a call to say that he could attend after all.

That’s when alarm bells started going off in my mind because it made me think that something was wrong and the doctors wanted to make sure I had support. I found it hard to sleep that night.

When I walked in to the appointment with Tom and was given the news that I had cancer, it all just felt so surreal. I wasn’t upset or anything, I was just in a state of shock and felt like it was a lot to take in and process.

At the time, they couldn’t tell me what stage the cancer was at because the tests hadn’t fully been analysed yet. That moment’s a bit of a blur but I think my husband was less prepared for the news than I was – at least I’d done some of my own research just in case.

I later found out it was triple negative breast cancer – considered to be particularly aggressive. Nevertheless, I was reassured that even though it was grade three, it wasn’t a large tumour and it was definitely treatable.

By this point, I was about 20 weeks pregnant and my oncologist reassured me that my baby would be safe with cancer treatment during my pregnancy, so I don’t recall being worried. It also helped that I sought out a number of other women via Instagram who had also gone through the same thing.

Two weeks later, I had my first round of chemotherapy and I was very nervous. From watching the process unfold on TV, I had expectations about what it was going to be like – being really sick and fatigued.

But in reality, I wasn’t sick at all and could cope with the tiredness. It was side effects such as mouth ulcers, hair loss, insomnia, diarrhoea and extreme dry mouth that were more frustrating

Luckily, for the most part, I fared quite well with side effects throughout the rest of my pregnancy too. I’m not saying it was a completely easy ride though.

Being pregnant while going through breast cancer treatment actually provided me with a nice distraction. I wasn’t concerned about the health of the baby because I was being scanned every three weeks to check its growth – and everything was fine. So thinking about things like setting up a nursery and having a baby shower allowed me to take my mind off it all.

Doctors were continually reassuring throughout, which was really comforting.

My energy levels were definitely lower during this time, but manageable. I worked throughout but Macmillan were incredibly flexible and I was able to come and go as I pleased. My health always came first with them and they made the whole process so much easier.

As it was lockdown, I was working from home anyway and my job gave me something to focus on. Working for a cancer charity while you have cancer is, again, surreal but everyone was amazing.

I continued chemotherapy up until about 33 weeks into my pregnancy. I was then induced in June at 37 weeks and I recommenced cancer treatment when my newborn, Remy, was three weeks old.

The birth itself was absolutely fine – I’d done it before so I knew what to expect. I was very well looked after throughout, but seeing and holding him for the first time was a really happy and special moment. Knowing we’d gone through this together made me feel so emotional.

I now have three cancer treatments left of my nine-week course of chemotherapy, then I’ll have surgery in October to remove the lump, and radiotherapy every day for three or four weeks after the operation.

I’m doing OK right now – I haven’t had sickness throughout the whole treatment, which I think would be the worst thing for me. I’m just tired all the time, which you get as a new mum anyway!

With a second child, you don’t worry as much and Remy’s slotted into our lives nicely so we’re enjoying these early weeks. Our family’s even been able to go to a festival and away to Devon on holiday, so that’s all been really lovely.

According to Cancer Research UK, breast cancer during pregnancy is rare – reported in one in every 3,000 pregnancies. I appreciate I was unlucky but I’m glad there’s proper support out there for people going through what I am.

I want to urge people to routinely check for lumps – even when they’re pregnant and their body is going through lots of changes. I never really checked before and I think if I didn’t find my cancer by fluke, my prognosis might be a very different story.

Get into a routine with checking your own body and look on websites like CoppaFeel to see their advice on what to do. I’d also say: be confident in going to your GP and don’t be afraid to push to be seen at a breast clinic if you’ve got concerns. Had I not worked for Macmillan, I probably wouldn’t have got a GP appointment so quickly and mightn’t have insisted on being referred to the clinic either.

My prognosis is good because I caught my cancer early. I’m definitely hopeful for the future because I’m one of those people that if I can’t control something, I just get on with the things I can.

Through my work, I know how important real-life stories can be in making a difference and influencing people not to ignore warning signs. And if I can help raise awareness, at least something positive will come from my diagnosis.

I’m optimistic about the future and I’m looking forward to being healthy and with my family for years to come.

For more information about the work CoppaFeel do, head to their website here.