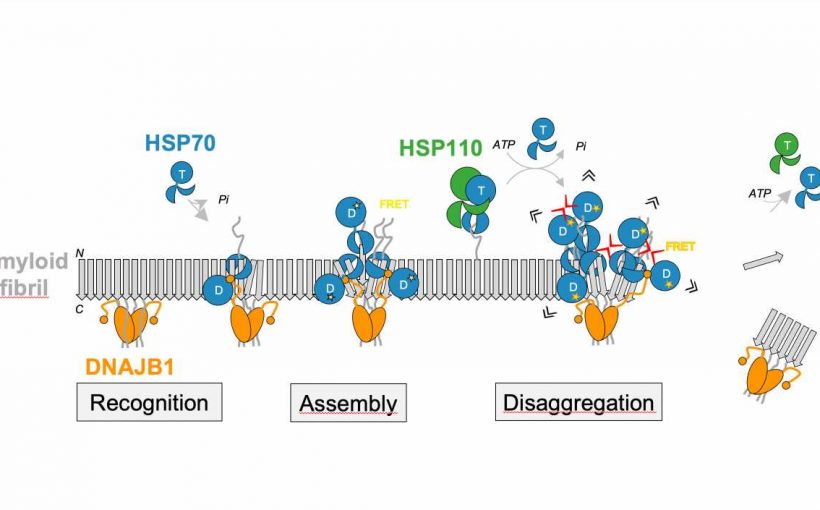 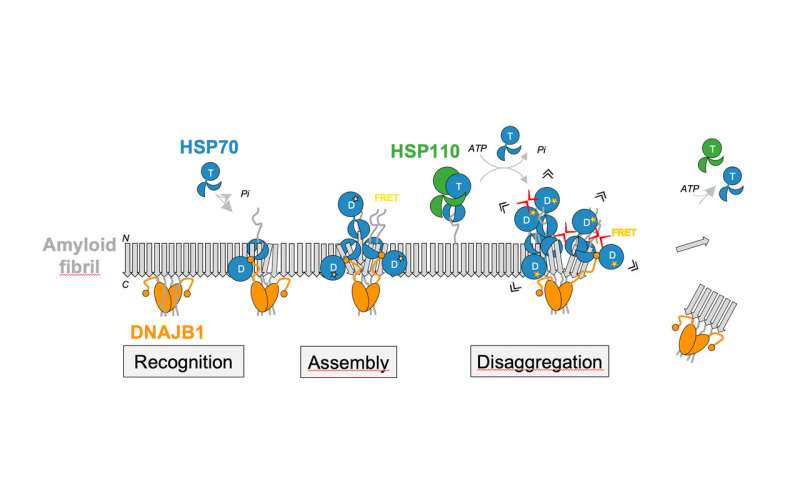 In many neurodegenerative diseases like Parkinson’s, protein aggregates form in the brain and are assumed to contribute to neuronal cell death. Yet there exists a cellular defense mechanism that counteracts these aggregates, known as amyloid fibrils, and can even dissolve fibrils already formed. This defense mechanism is based on the activity of molecular chaperones, i.e. protein folding helpers, of the heat shock protein 70 family (Hsp70).

Molecular biologists from Heidelberg University and the German Cancer Research Center investigated how the Hsp70 system disaggregates amyloid fibrils of the Parkinson-specific protein α-synuclein in a test tube. The research team led by Dr. Bernd Bukau expects their research results to provide new insights into how Parkinson’s disease develops and what might be done to influence it. The results were published in two articles in the journal Nature.

Proteins in all cells, from bacteria to human cells, need to fold to their native state. The chains of amino acid building blocks assume specific three-dimensional structures that give proteins their functionality. This state of correct folding is constantly threatened by external and internal influences that can lead to incorrectly folded and hence damaged proteins. There is a risk that damaged proteins will aggregate, or clump together into longer strands, the amyloid fibrils. This happens with α-synuclein in Parkinson’s disease, for example. The fibrils, in turn, are the starting point for even larger deposits.

“The formation process of such fibrillar aggregates can damage cells and even lead to cell death, as is the case in neurodegenerative diseases like Parkinson’s and Alzheimer’s,” explains Bukau, a researcher at the Center for Molecular Biology of Heidelberg University (ZMBH) and the German Cancer Research Center (DKFZ).

Bukau’s research focuses on how these protein aggregates can be dissolved. In earlier work, he and his team succeeded in identifying a cellular activity that plays a vital role in dissolving fibrillar aggregates, which is based on chaperones of the Hsp70 family. Hsp70 chaperones help other proteins with folding and can even isolate and refold aggregated proteins. The latest research by Bukau and postdoc Dr. Anne Wentink shows the effects the Hsp70 chaperones have on the Parkinson-specific amyloid fibrils of the α-synuclein protein. α-synuclein is a small protein that helps in the release of messengers called neurotransmitters in the brain, although its exact function remains unclear. It became known because massive deposits of this specific protein were found in Parkinson’s patients and has been causally linked to the disease.

In biochemical experiments, the Heidelberg scientists were recently able to show that the human Hsp70 chaperone relies on the assistance of two specific co-chaperone partners to dissolve the amyloid fibrils of the α-synuclein protein. A precisely regulated interaction of these proteins leads to the formation of chaperone complexes on the surface of the fibrils, which then break up the aggregates.

The second study, published in Nature, focuses on a previously unknown regulatory mechanism, a type of molecular switch that sets in motion the overall Hsp70 chaperone activity to dissolve the amyloid fibrils. This mechanism is based on a sequence of direct interactions between the different parts of the DNAJB1 co-chaperone and the Hsp70 chaperone. This ultimately activates Hsp70 to use ATP as an energy source, making it possible to productively bind to the fibrils and effect their disintegration.