Home » Health News » Factbox: Latest on the worldwide spread of the coronavirus 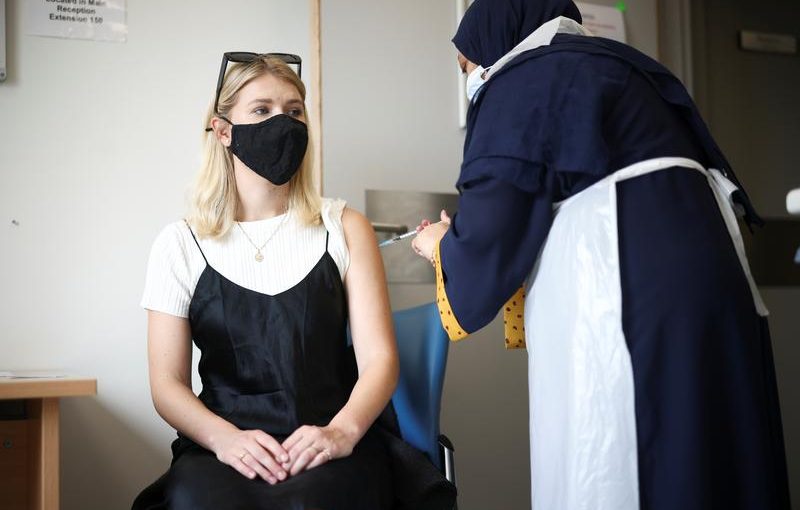 (Reuters) – Some major Australian cities have enforced tougher restrictions to prevent the spread of the Delta variant, while top U.S. infectious disease expert Anthony Fauci said America would not lock down again despite surging cases.

A person receives a dose of the Pfizer BioNTech vaccine at the Central Middlesex Hospital in London, Britain, August 1, 2021. REUTERS/Henry Nicholls

* Britain will offer booster shots for 32 million people next month, according to a media report, while its finance minister pressed for an easing of travel restrictions to boost tourism.

* Thousands of people protested in Paris and other French cities against a mandatory coronavirus health pass for entry to a wide array of public venues.

* New Zealand will open up one-way quarantine-free travel for seasonal workers from Samoa, Tonga and Vanuatu to address labour shortages in the horticulture industry.

* Tokyo Olympics organisers reported on Monday 17 new Games-related COVID-19 cases including one athlete, bringing the total number since July 1 to 276.

* Cambodia will begin offering a booster shot, switching between the AstraZeneca and Chinese vaccines.

* Vietnam will extend strict curbs on movement in its business hub Ho Chi Minh City and another 18 cities and provinces throughout its south for another two weeks.

* A preponderance of evidence proves the coronavirus leaked from a Chinese research facility, said a report by U.S. Republicans released on Monday, a conclusion that U.S. intelligence agencies have not reached.

* Venezuela will receive 6.2 million doses of vaccines through the COVAX initiative “in the coming days,” President Nicolas Maduro has said.

* Botswana’s health minister said the government was paying the equivalent of $15 a dose for the vaccine developed by China’s Sinovac Biotech and almost $29 a dose for Moderna’s shot.

* Pfizer and Moderna have raised the prices of their vaccines in their latest European Union supply contracts, the Financial Times reported.

* The protection that vaccines give against coronavirus infection, and potentially severe disease, is highly likely to wane over time, scientists told the British government’s advisory group.

* U.S. senators introduced a sweeping $1-trillion bipartisan plan to invest in roads, bridges, ports, high-speed internet and other infrastructure, with some predicting the chamber could pass this week the largest public works legislation in decades.