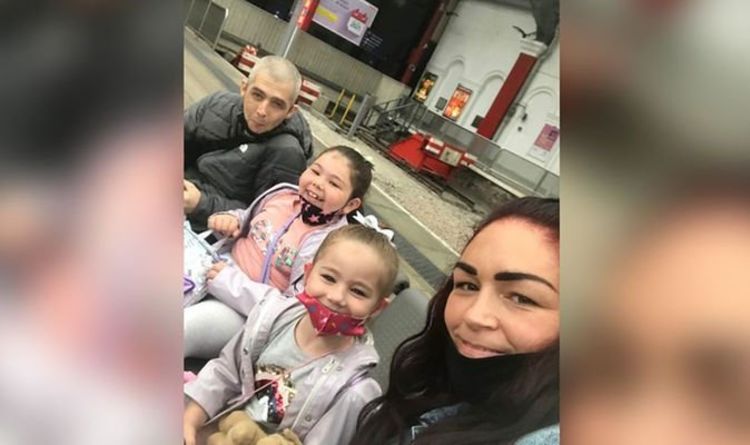 Michael Moriarty went to his GP after noticing blood when emptying his bowels. The father of two said the doctor dismissed his concerns as nothing more than haemorrhoids, and so he accepted the diagnosis even though the bleeding continued for several years.

And in March last year, Michael was struggling with pain while working night shifts as a cleaner.

Michael said: “It was hard, I was getting in pain a lot. I didn’t have a doctor at the time so I went the A&E and they gave me a scan and said I was just very constipated.

“I was coming home and doing yoga and gave myself colonic irrigation off a kit bought from Amazon. I was trying everything but I was still in a lot of pain.”

The doctor said it was likely he was suffering from Irritable Bowel Syndrome (IBS) but the pain continued for months and so he took himself to A&E and was given a CT scan.

He had a cancerous tumour in his bowel as well as in his liver and lung.

“When she told me I broke down. I mean, I’ve got two young kids. It was a lot to take in,” Michael, of Walton, Liverpool, said.

In January this year, the cleaner underwent an intensive course of chemotherapy. Unfortunately, although the treatment had slightly shrunk the tumours in his liver and lung, the bowel tumour was the same.

Michael then underwent a gruelling bout of radiotherapy to try and reduce the size of the bowel tumour.

Despite feeling positive that the treatment was working and that surgery could now be an option, he was dealt another devastating blow.

Michael, who lives with his partner Lyndsey and their two daughters, seven-year-old Libby and five-year-old Phoebe, said: “There was a slight reduction in the main tumour but the tumour in my liver and lung have become bigger now.”

Next week, he is due to start another course of chemotherapy which doctors have said has a 30% chance of working.

Michael is also fundraising to try and raise enough money for a tailored treatment only available in Germany.

During his terrible ordeal, Michael said the support he has had from his family has been incredible.

He said: “Lyndsey has been amazing. We’ve got two young kids together and she’s been picking up a lot of the slack because I can’t do anything really.”

He added: “Hopefully, please god, this chemotherapy can work.

“Once I got the diagnosis everything has been quick but until you get to that point it’s hard.

“They said because I was young it was IBS and nothing to worry about.

“And when I was told I had piles as a young man – I was only about 28 – it was just embarrassing really.”

The dad continued: “I’d say just go and get checked. If you feel as if something’s wrong just go.

“You know your own body better than anyone and if you feel as if something’s wrong just keep going.”