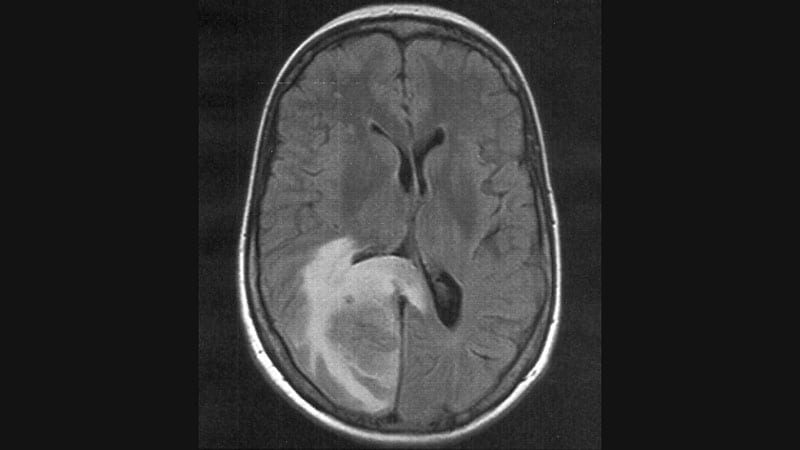 An 8-year-old girl who was infected with SARS-CoV-2 died after developing an extremely rare condition known as acute fulminant cerebral edema (AFCE), according to pediatric neurologists who are urging colleagues to watch out for similar cases.

At least one other child in the United States has died after becoming infected with the virus and developing cerebral edema. “The rapid and devastating clinical course in both of these cases highlights the need for early recognition of a cerebral edema and AFCE as potential complications of COVID-19 in pediatric patients,” the neurologists wrote.

According to pediatric neurologist Timothy Gershon, MD, PhD, of the University of North Carolina at Chapel Hill, the child appeared in clinic in July 2020. She had been healthy but was suffering from 1 day of fever, seizure-like activity (generalized convulsions and drooling), anorexia, and lethargy.

The girl, who was subsequently diagnosed with COVID-19, deteriorated in the hospital. “She received IV dexamethasone in attempts to reduce cerebral edema,” the neurologists wrote. “Regarding immunomodulatory therapy, she received intravenous immunoglobulin (2 g/kg), anakinra, and hydrocortisone; despite approval for remdesivir and COVID-19 convalescent plasma, these were ultimately withheld due to poor prognosis.”

Brain death examinations at 24 and 48 hours after cardiac arrest were consistent with brain death, they reported.

Neurologists believe the patient suffered from AFCE, “an often fatal pediatric clinical entity consisting of fever, encephalopathy, and new-onset seizures followed by rapid, diffuse, and medically-refractory cerebral edema.” They add that “AFCE occurs as a rare complication of a variety of common pediatric infections, and a CNS [central nervous system] pathogen is identified in only a minority of cases, suggesting a para-infectious mechanism of edema.”

Neurologists offered a case definition of the “recently recognized” AFCE earlier this year.

“This was an extremely rare rapid progression to cerebral edema. I think it was related to the patient’s COVID infection, but why this patient got it and others don’t is unknown,” Gershon said in an interview. “The full spectrum of neurological complications of COVID were not yet known [at the time]. We didn’t know, and still don’t know, what the causative links are between COVID and suddenly having seizures and brain swelling.”

No funding was reported, and the authors report no relevant disclosures.