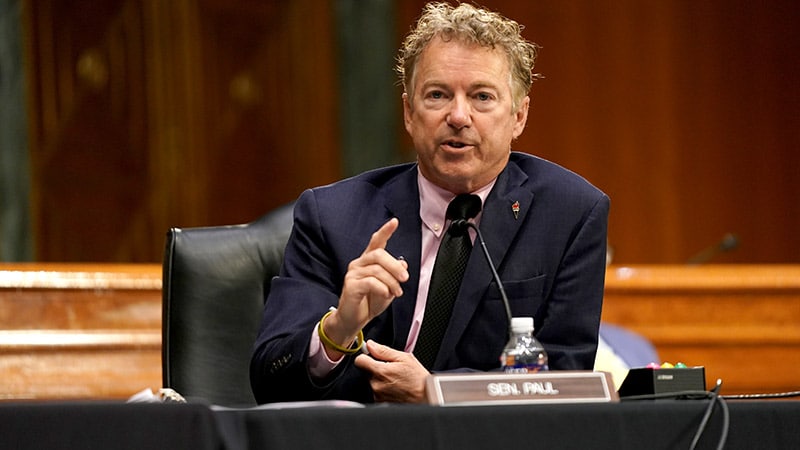 LOUISVILLE, Ky. (AP) — U.S. Sen. Rand Paul of Kentucky said on a radio show he won’t be getting the COVID-19 vaccine, but that he might change his mind if people who previously contracted the disease are getting reinfected at a greater rate than those who are vaccinated.

The Republican — more than a year after contracting COVID-19 — said on a podcast released Sunday on WABC-AM in New York that he doesn’t want the federal government ordering him around.

“In a free country you would think people would honor the idea that each individual would get to make their medical decisions,” Paul said. “Are they going to also tell me I can’t have a cheeseburger for lunch? Are they going to tell me I have to eat carrots only and cut my calories? All that would probably be good for me. But I don’t think ‘Big Brother’ ought to tell me to do it.”

Paul claimed that he has “natural immunity,” but research suggests having COVID-19 may not protect against getting infected again. And in cases where reinfection causes no symptoms or just mild ones, people might still spread the virus. That’s why health officials have urged vaccination as a longer-term solution.

Paul announced in March 2020 that he had tested positive for the virus, becoming the first case of COVID-19 in the U.S. Senate. At the time it raised fears about further transmission of the virus among senators, including more than two dozen who are in their 70’s or 80’s.

Paul said he continued working at the U.S. Capitol after being tested for coronavirus because he had no symptoms of the illness and believed it was “highly unlikely” he was sick. Paul also said he did not have direct contact with anyone who tested positive for the virus or was sick.

Paul’s refusal to self-quarantine after being tested sparked bipartisan outrage, including from some of his colleagues.