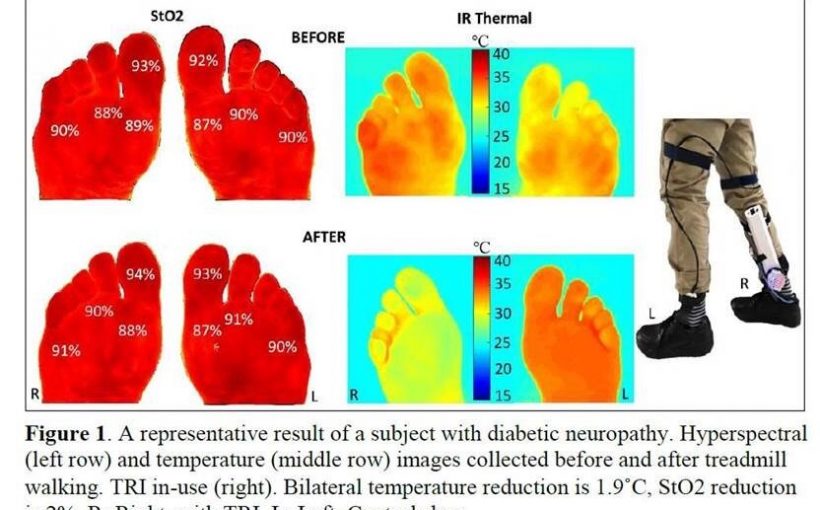 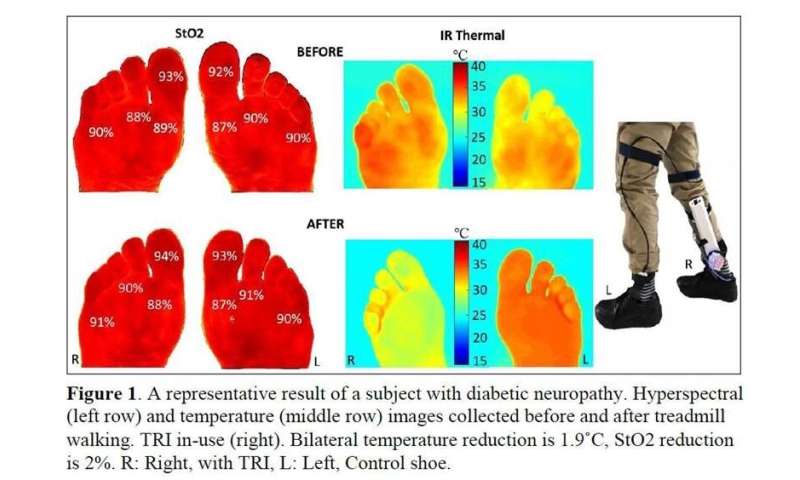 A new cooling insole developed by UT Southwestern scientists reduced the foot temperature of patients with diabetic neuropathy by several degrees, diminishing a significant risk factor for diabetic foot ulcers. This new device, detailed in an article published online ahead of print May 6 in The Journal of Foot & Ankle Surgery, could eventually prevent thousands of amputations that take place worldwide each year because of this condition.

Just in the U.S., more than 100,000 lower extremity amputations take place every year, many of them prompted by diabetic foot ulcers. These ulcers are associated with numerous quality-of-life and health consequences, including a mortality rate of 50 percent within five years for patients who develop them. Although the exact cause of this common diabetes complication is unclear, high foot pressure has long been considered a prevailing cause. Consequently, the most prescribed preventive treatment for diabetic foot ulcers is pressure-relieving insoles.

However, says Metin Yavuz, D.Eng., an associate professor in the School of Health Professions’ Division of Prosthetics and Orthotics at UT Southwestern Medical Center, this prophylactic intervention isn’t accomplishing its goal, since diabetic amputation rates have been on the rise despite widely available pressure-reliving insoles. “Even when patients receive therapeutic shoes and insoles, education, and close monitoring,” he says, “30 to 40 percent of patients who have had one diabetic foot ulcer will still develop another within a year.”

Hoping to decrease these numbers, Yavuz and his colleagues focused on another risk factor for these ulcers: foot temperature. Animal studies have shown that skin maintained between 25 and 30 degrees C is less likely to break down under pressure than skin at higher temperatures. The feet of diabetic patients already tend to be warmer due to inflammation associated with the disease, Yavuz explains, compounded by friction from walking and the stiff therapeutic shoes that patients wear, which are usually made of synthetic materials that act as heat insulators.

“We thought, why don’t we break that vicious cycle by cooling the foot?” he says.

To do that, Yavuz and his lab, aided by a pilot grant from UTSW’s Center for Translational Medicine, developed a system that circulates cool water into pressure-relieving insoles. The device, which the researchers named Temperature and Pressure Monitoring and Regulating Insoles (TAPMARI), consists of a small box strapped to the wearer’s calf that houses a cooling unit, a small water pump, a battery pack, and a thermostat. The cooling unit harnesses a type of thermoelectric cooling called the Peltier effect to chill water to a desired temperature that’s then pumped into insoles placed in the wearer’s shoes. Yavuz later teamed up with the engineering company Vivonics Inc. and obtained funding from the National Institutes of Health to improve the design.

The researchers tested the improved device in eight volunteers: one man and seven women of a median age of 45 years. Five of these volunteers were healthy and three had diabetic neuropathy.

Using an infrared thermal camera, the researchers took photos of the subjects’ feet at baseline before wearing the insoles, then placed a cooling insole in only their right shoes. They took more thermal photos after the subjects walked five minutes on a treadmill and again after they wore the insoles an additional two hours and walked five minutes on the treadmill again.

Cool temperatures from the insoles didn’t cause vasoconstriction (narrowing of blood vessels) in the foot, which could have damaged tissue, Yavuz says. However, sole temperatures reached as high as 30.8 degrees C in some regions of the cooled feet, particularly in the midfoot, suggesting that the design of the insole needs to be improved. Other design elements could also be tweaked, he says, such as reducing the size of the unit worn on the calf.

Eventually, Yavuz says, these devices could change the course for patients with diabetes, preventing this common and often serious complication.

“Diabetic foot ulcers can be a major burden on patients, their families, caregivers, and the health system,” he says. “What we’re doing now to prevent these ulcers or simply maintain the status quo isn’t working. TAPMARI could be the start of a whole new approach.”