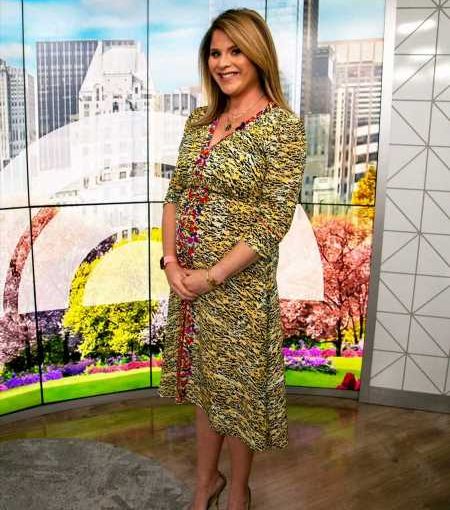 The countdown is officially on for the arrival of Jenna Bush Hager‘s baby boy!

More than three months after Jenna, 37, revealed that she and her husband Henry Hager are expecting their third child together, the Today show co-host announced that she would be going on maternity leave.

“Today is my last day!” she said on-air Friday. “I want to thank all of you guys for the last four months. I can’t believe it’s been four months, but to share this joy with all of you, with you Willie [Geist], with everybody that’s filled in … all of you that have cheered us on as a show and cheered me on personally, it means the world. I feel so grateful to work in a place with people that lift me up every day.”

The announcement came the same day that Jenna’s 10 a.m. Today co-host Hoda Kotb made a brief visit to the show during her own maternity leave, dropping in via satellite to open up about her upcoming book and being a mom to her two daughters: Haley Joy, 2, and Hope Catherine, 3 months.

“To be able to do it with Hoda, to have this special moment together, to create this baby, our show, and then these babies, has been a really beautiful moment in our lives,” Jenna said. “We appreciate all of you who have supported us through it all.”

But that wasn’t all — Kotb even surprised her co-host with a sweet video message.

“JBH, I hope you have the best maternity leave,” she said. “You are going to have so much fun playing with your babies and enjoying your time. I hope you treasure every single second of it. You know I’ve been treasuring every single second of it. I can’t wait to come back to work and hang with you on the set, but for this moment, you spend time with your children, you live in this moment.”

Jenna, who shares daughters Margaret “Mila” Laura, 6, and Poppy Louise, 3½, with Henry, announced in April she was pregnant with a baby boy.

She eventually broke the news to her daughters on Easter morning, revealing their excited reactions in a sweet video on Instagram. “Is it the best Easter ever?” she asked her kids, to which Mila replied, “Yeah, ’cause I have a baby boy in my mommy’s tummy!”

The former first daughter, who was announced as the new co-host for the third hour of Today in February and started in April, celebrated her impending arrival with a baby shower in early June that featured guests like Kotb and Savannah Guthrie.

“I am pregnant and it was unexpected,” she told PEOPLE in May. “We really hadn’t planned to even have a third baby and it feels like this blessing that I hadn’t even asked for.”