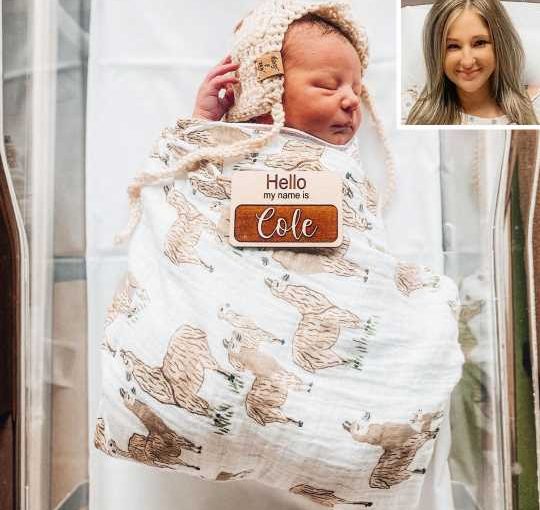 Brittani Boren Leach is revealing the sweet way her family is paying tribute to their late son Crew.

On Thursday, the YouTuber and husband Jeff welcomed a baby boy, Cole Dean, 10 months after the death of their 3-month-old son Crew.

Leach revealed the name on Instagram shortly after announcing his arrival with an adorable picture of the newborn wearing a name tag while sleeping in his hospital bassinet.

"Big brother Crew sure outdid himself, and no doubt is smiling ear to ear in Heaven. 🤍 Welcome to the world Baby Cole, you have NO idea how much you’re loved, 🌈," Leach concluded the heartwarming post.

Leach — who is also mom to sons Carter, Cooper and Cash, plus stepdaughter Sydney — later explained how they came up with the name Cole Dean, and how the middle name serves as an homage to Crew. "Two reasons we chose Dean, one is because it's a family name, from Jeff's father and grandfather," she first shared.

"We also use baseball themed middle names and 'Dizzy' Dean played for the Cardinals," she continued. "Cardinals remind us of our boy. ❤️" Earlier this year, Leach explained that cardinals are "extremely special to our family" as the bird reminds them of their late son.

"Our kids even get excited when 'Crew bird' comes to visit," she said in an Instagram in May. "Cooper said to me yesterday, 'Mom, I think he’s trying to say, I want to play with you, Cooper!' ❤️"

"Today they bulldozed all the trees down next door in order to build a house, a day that I have been dreading for awhile. I was so afraid that it would scare our little Cardinal away. But once again, what little faith I had, because our sweet 'Crew bird' has been perched in our backyard singing a song as happy as can be, 😍" she continued.

On Friday morning, Leach gave fans a brief update on Cole by posting a photo on her Instagram Story. "Good morning," she wrote alongside a picture of Cole laying on his mother's chest. "Eating like a champ, like his brothers. ❤️" Leach revealed in May that she and Jeff were expecting again, writing alongside a video announcement on her Instagram, "Sent straight from Heaven and without a doubt, hand-picked by big brother Crew himself, estimated to arrive on December 1, 2020. ❤️"

In the video, Leach and her family could be seen walking through a field. Leach then held a photo of Crew in front of her baby bump before the family gathered to carry a present with a note reading, "Heaven Sent."

"We wanted to announce in a way that honored our sweet Crew, so thank you @elliott.beltran for this amazing video," she continued in the post, which also included a quote often used by parents to describe a "rainbow baby" — a child born after a miscarriage, stillbirth, neonatal death or infant loss.

Leach and Jeff lost baby Crew last year after he was found unresponsive while napping on Christmas Day. She announced the tragic news that Crew had died two days later, sharing a photo of her cradling her baby boy's body, with her husband beside her.