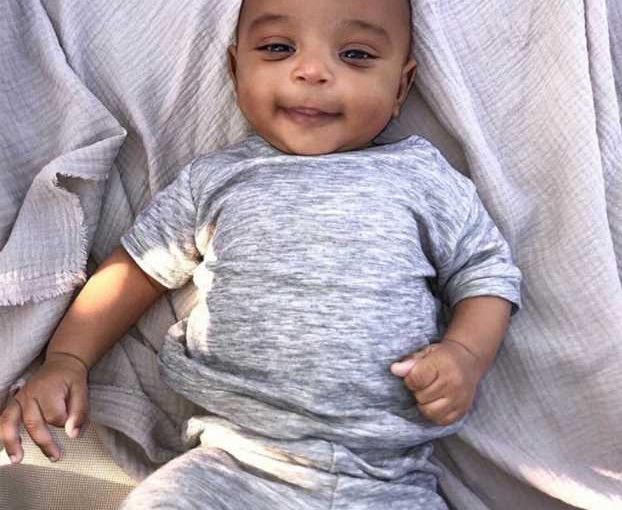 Kim Kardashian West shared an adorable new photo of 2-month-old Psalm on Wednesday, and she couldn’t help but gush over her youngest baby boy.

“I meannnnn my baby Psalm is so sweet!!!” the mother of four, 38, wrote in the caption of the snap. In the picture, little Psalm is smiling at the camera as he wears a heather grey outfit.

The photo caught the attention of some of Psalm’s aunts and his mom’s celebrity friends.

Kendall Jenner commented, “what it do babbbyyyyyy.”

It’s no secret that Psalm takes after his 17-month-old sister — the resemblance between the siblings was one of the first things Kim shared about him after he was born in May.

“He’s also Chicago’s twin lol I’m sure he will change a lot but now he looks just like her,” the beauty mogul wrote on Twitter after Psalm was born.

Kris Jenner previously revealed the inspiration behind Psalm’s name, which means “song” in Hebrew, saying that he’s named after the Old Testament book.

“The inspiration was the Book of Psalms in the Bible,” Kris, 63, told ET Online shortly after her most recent grandchild was born. “I think it’s just a wonderful way to celebrate how they feel. And he’s such a blessing, so it’s perfect.”

A source close to Kanye West previously told PEOPLE that Psalm’s name is a “good reflection” of where the parents are spiritually.

“Kanye has been going through a spiritual revival lately. Every name has a meaning that is personal between Kanye and Kim and the child,” the source said, adding that the rapper “reads the Psalms a lot. He talks about the Psalms he loves. So on that level, the baby name isn’t a surprise.”