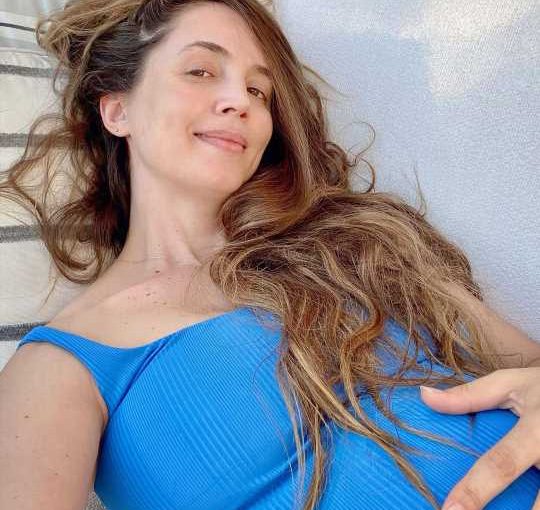 Eliza Dushku is expecting baby No. 2!

The actress, 40, revealed on Saturday that she is expecting her second child with husband Peter Palandjian.

"Mama x 2.." she wrote on Instagram alongside a trio of images — including one in which she smiled while showing off her growing baby bump.

"@peter.palandjian & B~ how I love you!! 💙♥️," she added, including a sweet nod to her husband and their son Philip, whom the couple affectionately refers to by the nickname "Bourne."

Seeming to already embrace his role as big brother-to-be, the actress also shared a photo of her 1-year-old son wearing a very special shirt. "Can you dig it? I'm going to be a big brother," the shirt's message reads. In August 2019, Dushku and her husband announced they had welcomed their first child.

"Our BABY = #Bourne," the Buffy the Vampire Slayer alum captioned two photo of their child, one of which showed him dressed up in a lion onesie.

Over the summer, while commemorating the 20th anniversary of Bring It On, the actress shared a photograph with her son, noting how much has changed since the beloved movie was released.

"Where I really am now: 20 years later! #BringItMomming," she wrote alongside a message to all her costars. "Miss you ALL!" Dushku revealed news of her first pregnancy news in February 2019, stepping out alongside her husband in N.Y.C. to attend a screening of Mapplethorpe, which she produced.

"So much to be happy and grateful for, we could not be more thrilled," she said on the red carpet at the time with her real-estate-CEO husband.

Shortly after welcoming their first child, the couple celebrated their first wedding anniversary. "Happy 1st Anniversary (of forever more!) Mr. Palandjian ~ my💞! 👶🏻Bourne & I are so, SO lucky," she wrote alongside photos of the pair on their happy day.