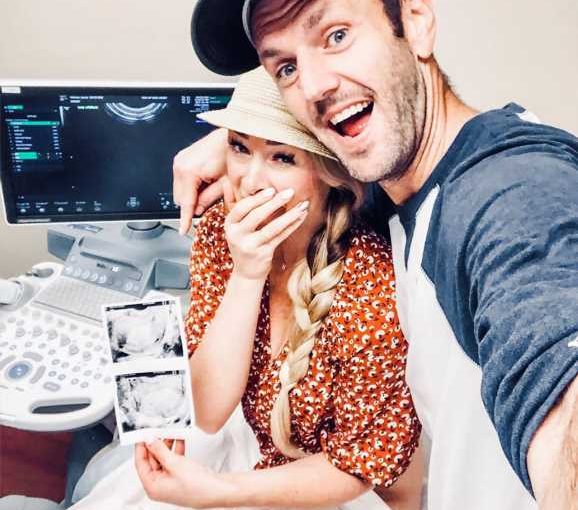 It’s been a long pregnancy journey for Jamie Otis.

After 18 months of struggling to expand her family, including suffering another miscarriage in January, the Married at First Sight star and husband Doug Hehner have announced they’re expecting their second child.

“We went to the fertility specialist and found out WE ARE PREGNANT!!!” Otis, 33, wrote on Instagram, alongside a series of images of the happy couple posing with their first sonograms of their baby on the way.

“I cannot even believe it!” she wrote. “After 18 long, painful months, two losses and negative after negative on the pregnancy tests we are *finally* pregnant again!”

Otis went on to share that although she’s “being cautiously optimistic,” she has “a feeling this little one is going to stick..”

Having teased their baby news the previous day, Otis went on to share that there’s a possibility the couple could be expecting twins.

“Yesterday the nurse called and said my blood work came back a bit different than anticipated,” she shared, adding that although based on her last period, she should be 4 weeks pregnant, she’s either further along than she thought or “I could potentially have twins.”

“They said it’s most likely I’m further along but I would absolutely love twins,” she wrote, as she thanked all of her fans for supporting her throughout her journey.

“Thank you, thank you, *THANK YOU!* for all the encouragement, love, & prayers. IT WORKED! WE ARE FINALLY PREGNANT !!!!!” she added, ending her announcement with an acknowledgment that her good news may be difficult for some to take in.

“I just want to say this: if you’re reading this & are currently in the process of #ttc – oh mama, my heart hurts for you. I know the instant internal pain that comes from another’s pregnancy announcement – even if you are or at least want to be – happy for the lucky couple. I just want you to know that your rainbow will come too. The storm can’t stay forever. Hold onto hope! I am thinking of you!”

Throughout her difficult journey, Otis has been incredibly candid about her struggles to expand her family.

“For me, I thought having a family would be very easy, so my own misconception about myself was [that] I would be able to have a family very easily,” she said in May on the Share Your Shine podcast. “Come to find out, it’s not as easy … and come to find out, one in four women will have these same issues.”

Earlier this year, Otis revealed on Instagram that during a doctor’s appointment, she and her husband learned the devastating news that she had miscarried at 10 weeks.

Otis — who is a mom to 2-year-old daughter Henley — explained that their “baby formed and there was an amniotic sac, but while the amniotic sac continued to grow the baby stopped at some point.”

The loss came more than two years after the married couple lost their baby boy, Johnathan Edward, in 2016 — four months into Otis’ pregnancy.

Last September, Otis — who also has a podcast with Hehner called Hot Marriage Cool Parents — also revealed she had experienced a chemical pregnancy just days after she shared a picture of a pregnancy test that she hoped was positive.

On Mother’s Day, Otis shared adorable photos of herself with her daughter and also paid tribute to Johnathan.

“We will never know his laugh or see him smile. Our hearts were ripped out of our chest,” she wrote about her loss. “My sweet angel baby, Johnathan Edward, made me a ‘real’ mommy for the first time. Although I only held him in my arms for a few short hours, I’ve carried him in my heart every.single.day since then.”