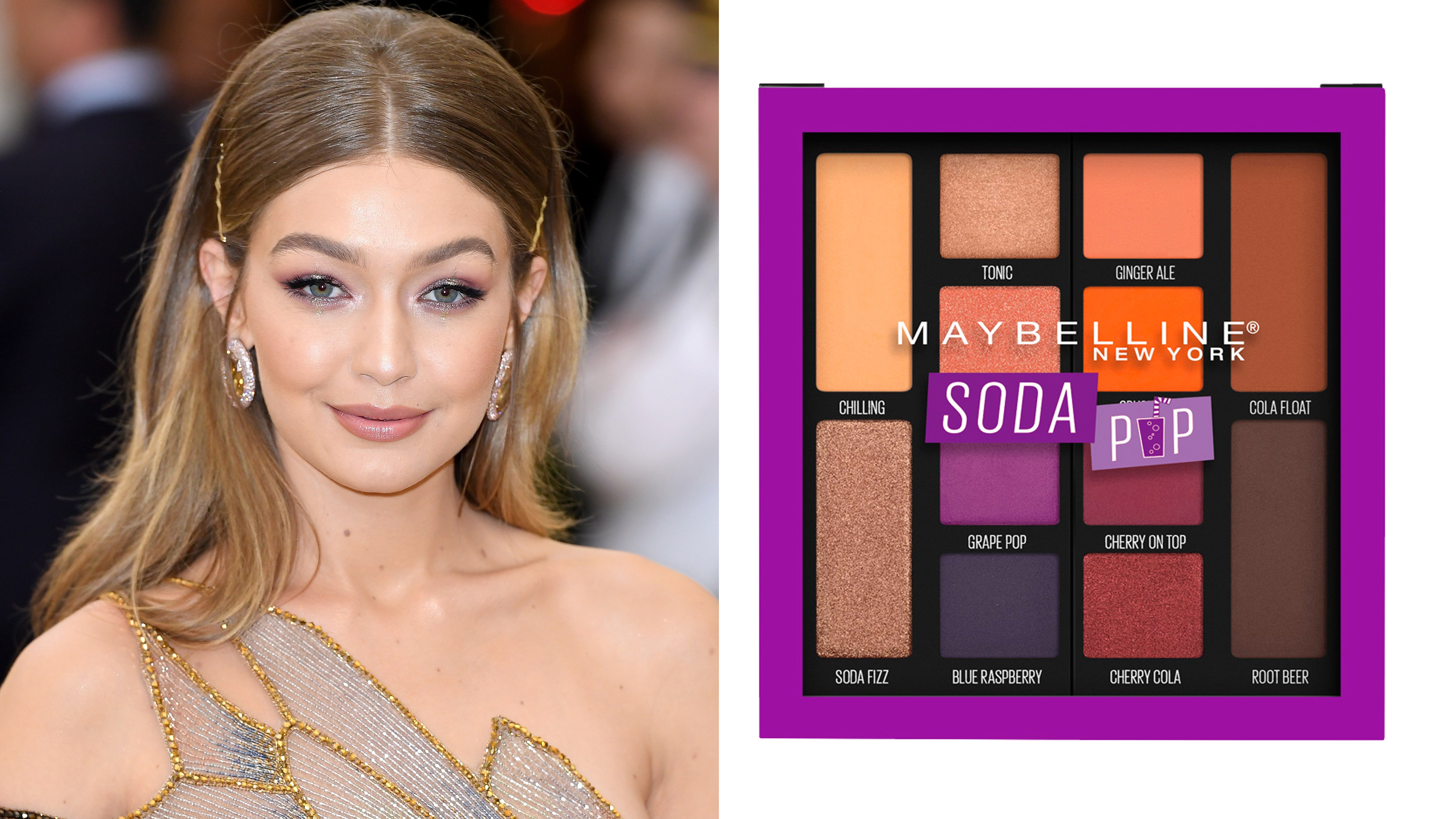 UPDATE (August 21, 2018): Remember that time you saw Gigi Hadid at the Met Gala and were like, "Damn girl, where's that eye shadow from?" And Gigi was like, "Oh this old thing? It's not out for another three months, at least," before sashaying into the media void that is the actual Met Gala?

OK, maybe that only happened in our imaginations, but there really is nothing more frustrating than seeing something you really want and having to wait to have it, like a plebe.

Well, plebes, the wait is over. Maybelline New York's Soda Pop Eyeshadow Palette is now available at Ulta for the cool price of $14.

The 12 vibrant earth-tones (it sounds like an oxymoron, but trust that it is not) are all named for soda pop flavors and other effervescent vibes (like Sugar High and Chilling). They're perfect for fall, and as Gigi proved quite eloquently, any ol' red carpet affair.

Snag one for yourself now and read below if you want to copy Gigi's stunning "stained glass" eye makeup look done by makeup artist Patrick Ta.

If there's ever been an ideal place to debut a new makeup product, it's at the Met Gala, when the fashion- and beauty-obsessed are hyper-focused on every little detail of what are routinely the most elaborate red-carpet looks of the year. And that's exactly what Maybelline New York did at the 2018 arrivals, wisely offsetting Gigi Hadid's dramatic stained-glass-mermaid Versace gown with a colorful-yet-wearable makeup look that civilians would very likely try in their far less extravagant real lives, including a brand-new eye shadow palette you'll be eager to get your hands on.

Hadid was seen wearing a mix of intensely pigmented warm and cool tones from the new Maybelline New York Soda Pop Eyeshadow Palette. Makeup artist Patrick Ta applied the shade Grape Pop in her crease, and then used the same brush to blend in the shade Blue Raspberry to add more depth. Blue Raspberry was then mixed on Hadid's lid with the shade Cherry on Top to create a base and blend out into the crease. Ta then used a clean brush to press Cherry Cola onto the lid for a pop of color, and he completed the look by using a pencil brush to apply Blue Raspberry yet again, this time on Hadid's lower lash line.

Although the Soda Pop Eyeshadow Palette isn't available just yet, the rest of Hadid's Maybelline New York eye look is. For the liner, Ta mixed Master Precise Ink Liquid Eyeliner ($8) in the shades Stellar Sand and Solar Gold and drew a tapered line below the lid. He with then brightened Hadid's eyes by applying Lasting Drama Lightliner ($6) in White Luster on her waterline. Her eyes were topped off with Falsies Volum' Express Mascara ($7) on just the top lashes.

As you might have guessed the rest of Hadid's makeup look was also created with Maybelline New York products. Ta primed her skin with Master Prime Hydrate + Smooth Primer ($10), followed by Fit Me! Dewey + Smooth Foundation ($8) and Fit Me! Concealer ($7).

After contouring her forehead and cheekbones with the dark side of the Master Contour V Shape Duo ($9) stick, he used Fit Me! Blush ($6) in Nude on the apples of her cheeks. Master Chrome Metallic Highlighter ($10) in Molten Gold was then applied to the inner corner, brow bone, nose and cheekbones.

But back to that new Soda Pop Eyeshadow Palette. If you're dying to see swatches, you know by now that beauty blogger Trendmood1 has you covered. Look at how shimmery those jewel-tones are.

The good news is that the palette is only $14. The bad news is that it won't be available until September 2018 (according to the brand, even though Trendmood1's post says August 2018 — who knows). Luckily, you can sign up on maybelline.com to be notified about pre-ordering, so you can be one of the first to get it when it does finally drop.