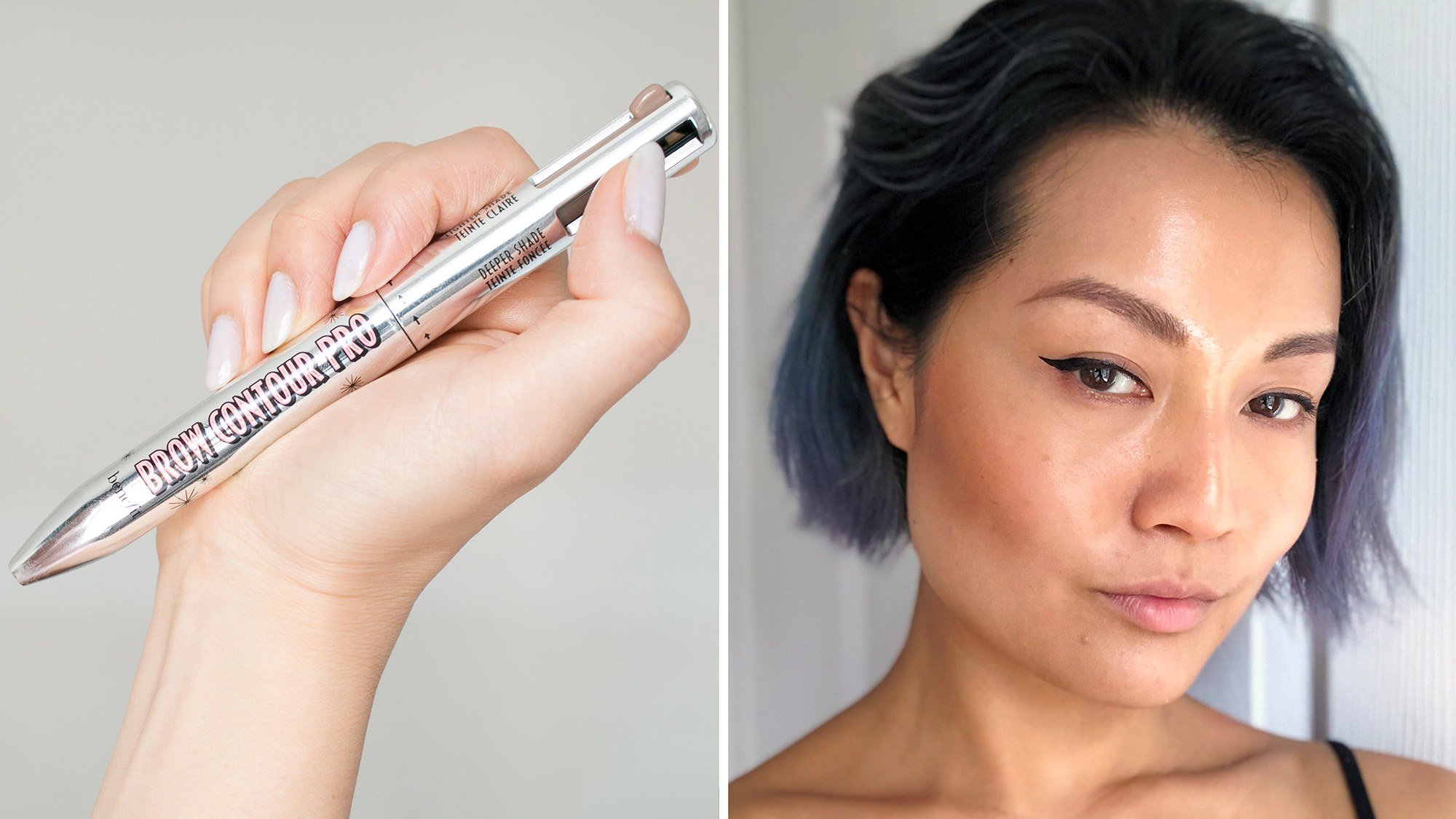 Eyebrows haven't been so collectively fussed over probably since maybe ever. There are brow pencils, brow gel, brow pomade, and even brow tattoos (aka microblading). Those two little caterpillars resting above your eyes are in the heyday of their golden age. Not one to be satisfied with just shaping, defining, and tweezing, you'll soon be able to contour your brows, much like one contours and sculpts their complexion. Benefit already has a pretty good grasp on the whole brow market. The brand's Gimme Brow is a best-seller and Allure Best of Beauty winner. It's got pencils and pomades galore — and now, it has the brand-new Brow Contour Pro. Here's everything you need to know about it.

If the Brow Contour Pro looks familiar, you too may be someone who came of age in the '80s and '90s who remembers the multicolored ballpoint clicky pens with four different colors that you selected by clicking four tiny levers down at the top of the pen. This was a clever invention and a great way to annoy anyone around you within earshot. Well, so is the Brow Contour Pro. It features four different shades of a soft pencil formula to define, highlight, and shade your brows to sculpted perfection.

There are five shades from light-ish to deep brown: Blonde Light, Brown Light, Brown Medium, Brown-Black Light, and Brown-Black Medium. However, to choose your shade, gauging how the definer shade (the lightest one) matches your skin tone is the way to go. It ought to be a tiny bit lighter than your actual skin tone because it's meant to create contrast. So while I would normally choose the deepest or black-colored brow pencil, I went with medium brown because the definer shade was my closest match.

How to Use the Brow Contour Pro

Unlike contouring your face, the shade you're defining your eyebrows with comes first to create an outline of where you'll be drawing them. Think about it like creating lanes in a road. This actually made elongating the ends of my brows way easier because I outlined the area before going in with the deeper shade of my pen (which a dark brown, in my opinion).

I then used the lighter shade, which was truer to a medium brown, to fill in the bulk of my brows, including the bushier beginning part. Then I blended the definer shade's lines with a clean angled makeup brush so the line wasn't as harsh.

You can use the definer shade as an eraser if you go too hard with the lighter and deeper shades or if you color outside the lines, so to speak. The highlighter shade is actually pretty similar to the definer shade, as far as I can see, but it's meant to be used under the brow arch as a highlighter (obviously), for the ultimate sculpted brow.

The idea of sculpting my eyebrows into the kind of brows that set Instagram ablaze, while totally doable with this pen, isn't really my goal — I just want to easily and evenly define them, from tip to tail (with the tail being my usual scourge). I like how easy the definer "lanes" make creating a super precise point at the end, and using all the shades in tandem tends to make my brows look fluffier overall. It's basically like having four brow products in one.

You can try it for yourself on Tuesday, August 7, when the Benefit Brow Contour Pro will be released at Sephora and benefitcosmetics.com. At $34, it seems a bit steep for your brows, but again — it's a four-in-one tool. And not to be extra, but aren't your brows worth it?