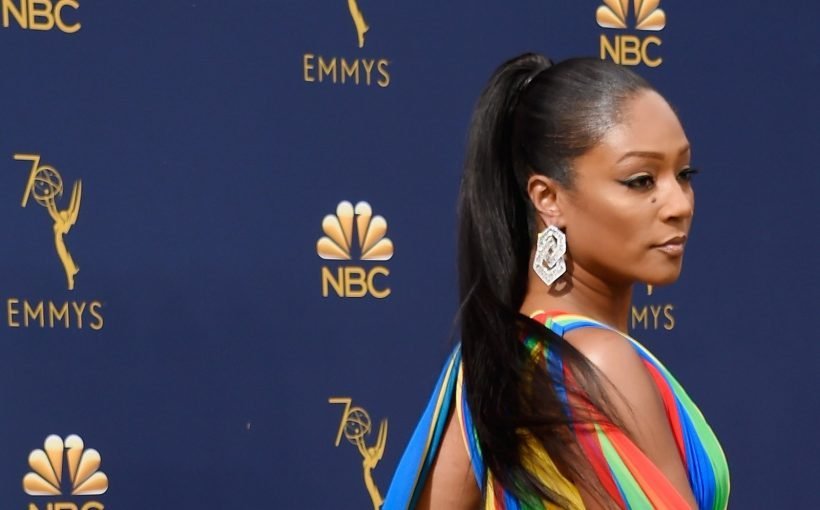 If you were watching Allure's Instagram Story before the Emmy Awards, you know that Tiffany Haddish and her makeup artist Dionne Wynn were having ridiculous levels of fun getting the breakout comedy star ready for the red carpet. But between eyebrow-bleaching jokes and dance breaks, there were some phenomenal product recommendations and application tips.

Before applying any color, Wynn prepped Haddish's skin with Bobbi Brown Hydrating Eye Cream and The Silk Canvas Protective Primer by Tatcha. That balm helped hold her foundation — two different shades by two different brands — in place for the night.

To conceal and highlight, Wynn turned to a combination of KKW Beauty Liquid Concealers: a mixture of shades 12 and 14 under her eyes, 12 to highlight the bridge of her nose and center of forehead, 15 around her hairline to contour, and 16 to contour her cheeks. She also highlighted her cheeks with the KKW Beauty Highlighter Palette, and added some warmth with a spice-hued blush.

For Haddish's eyes, Wynn used a waterproof black kohl eyeliner in the waterline and along the top lashes, which were enhanced with two pairs of Ardell Double Up Wispies false eyelashes. Underneath bottom lashes, which were coated in Lancôme Hypnôse Buildable Volume Waterproof Mascara, Kylie Cosmetics Glitter Eyes in Destiny.

For the brows — Haddish said on Allure's Instagram Story that Wynn convinced her to bleach them to "soften" her face — Wynn used the light brown shade from the Eylure Vegas Nay Brow & Shadow Pro Palette, followed by Anastasia Beverly Hills Tinted Brow Gel in Auburn to set them.

Needless to say, she (was) ready.