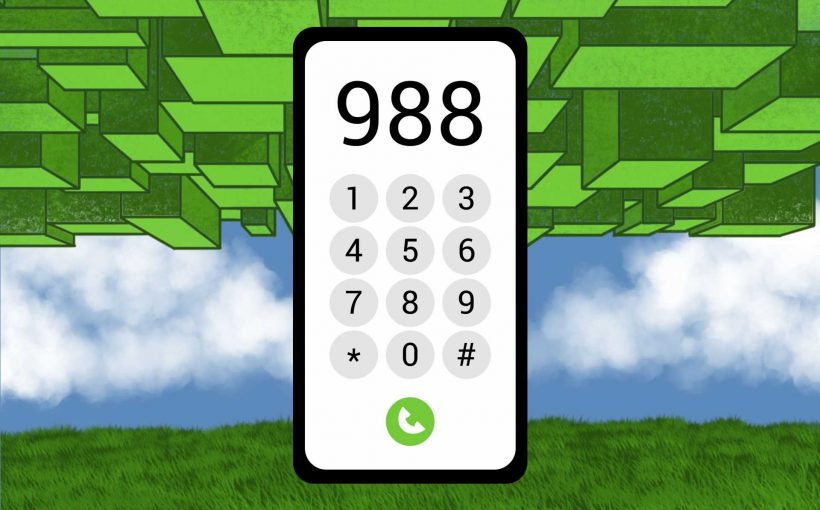 The National Suicide Prevention Lifeline’s 988 phone number, which launched July 16, was designed as a universal mental health support tool for callers at any time anywhere.

But the U.S. is a patchwork of resources for crisis assistance, so what comes next isn’t universal. The level of support that 988 callers receive depends on their ZIP code.

In particular, rural Americans, who die by suicide at a far higher rate than residents of urban areas, often have trouble accessing mental health services. While 988 can connect them to a call center close to home, they could end up being directed to far-away resources.

The new system is supposed to give people an alternative to 911, yet callers from rural areas who are experiencing a mental health crisis may still be met by law enforcement personnel, rather than mental health specialists.

More than 150 million people in the U.S. — most from rural or partially rural communities — live in places designated as mental health professional shortage areas by the federal Health Resources and Services Administration. That means their communities don’t have enough mental health providers — usually psychiatrists — to serve the population.

The Biden administration distributed about $105 million to states to help increase local crisis call center staffing for the new 988 system. But states are responsible for filling any gaps in the continuum of care that callers rely on if they need more than a phone conversation. States also shoulder most of the responsibility for staffing and funding their 988 call centers once the federal funding runs dry.

The federal Substance Abuse and Mental Health Services Administration, which runs the existing 800-273-8255 lifeline that 988 expands upon, has said that a state that launches a successful 988 program will ensure callers have a mental health professional to talk to, a mobile crisis team to respond to them, and a place to go — such as a short-term residential crisis stabilization facility — that offers diagnosis and treatment. The federal agency also intends for 988 to reduce reliance on law enforcement, expand access to mental health care, and relieve pressure on emergency rooms.

Those objectives may not play out equally in all states or communities.

If a call center has no mobile crisis team to dispatch, “you don’t have the stabilization, then you’re basically going from the call center — if they can’t meet your needs — to the emergency room,” said Dr. Brian Hepburn, executive director of the National Association of State Mental Health Program Directors. The group developed model 988 legislation for states that emphasizes the need for consistent services regardless of caller location.

For the new call system to be consistent, “you really need that full continuum of care,” Hepburn said. “The expectation isn’t that it’s available now. The expectation is,” he said, “your state would eventually get you there.”

But as 988 launched, most states had not passed legislation to fill gaps in mental health care.

In South Dakota, which has the eighth-highest suicide rate among states, health officials said responding to mental health crises in rural counties will be a challenge. So they plan to incorporate volunteer emergency medical services and fire department personnel into the emergency response to 988 calls on the ground. More than two-thirds of South Dakotans live in a mental health professional shortage area.

The state has only one professional mobile crisis team that responds to emergencies in person, according to South Dakota Department of Social Services Cabinet Secretary Laurie Gill. The mobile response team is located in South Dakota’s largest city, Sioux Falls, and serves the southeastern corner of the state.

Sioux Falls is also home to one of the state’s two short-term crisis facilities. The other is more than 300 miles away, in Rapid City. South Dakota also has 11 community mental health centers that assess patients and provide outpatient treatment. Those centers also use law enforcement agencies to respond to mental health crises.

A Helpline Center counselor could direct a 988 caller to one of those centers.

“Sometimes, yes, you will have to drive a couple hours to get to a community mental health center, but sometimes not,” Kittams said. “Generally speaking, people who live in the rural parts of South Dakota very much understand that they potentially are going to have to drive to a resource, because that’s probably true in the other aspects of their life, not just for mental health care, but for other types of care or resources that they need.”

Helpline Center reported that its operators de-escalate 80% of calls without deploying a crisis team. But Vibrant Emotional Health, a nonprofit that co-administers the nationwide lifeline, has projected a fivefold increase in calls for South Dakota in the first year that 988 is in place. Any spike in calls will likely increase the demand on crisis teams.

Vibrant has said that 988 will reach at least an additional 2 million people nationwide in its first year. Half of them are expected to come through the diversion of mental health-related calls from 911 and other crisis centers to 988.

Just next door to South Dakota, Iowa entered the 988 era with a more robust mobile crisis response system — “at least on paper,” said Peggy Huppert, executive director of the Iowa chapter of the National Alliance on Mental Illness. Eighty-seven of the state’s 99 counties have a mobile crisis provider, but most Iowans live in a mental health professional shortage area.

“We still have a long way to go with properly training all first responders, especially law enforcement, because law enforcement are trained to come to a scene and take control of the scene,” she said. “People who are in a behavioral health crisis, who are perhaps psychotic, sometimes they’re hearing voices, they’re hallucinating, they’re in an altered state. They are not prone to obeying commands. That’s where things often go sideways.”

Officials at a 988 call center for nine counties in east-central Iowa operated by CommUnity Crisis Services said that their mobile crisis teams will be composed only of counselors but that law enforcement agencies may be called if a team determines that’s necessary for its safety.

Adrianne Korbakes, chief operating officer at CommUnity, said the mobile crisis teams are a great option in rural communities where seeking mental health treatment might carry a stigma. And with 988, she said, “you can call or text or chat from the privacy of your own home — nobody has to know that you’re accessing services.”

To prepare for those contacts, CommUnity has nearly doubled its staff during the past seven months — expanding from 88 employees in January to 175 in July.

Despite the 988 preparations in Iowa and South Dakota, neither state’s legislature has funded the system long term. In the National Suicide Hotline Designation Act of 2020, Congress gave states the authority to cover 988 expenses by adding a surcharge to cellphone service, but most have not done so.

Only 13 states have enacted 988 legislation, according to the National Alliance on Mental Illness, with varying applications and prescriptions on the continuum of care.

In Iowa, Huppert said, “there’s very much a wait-and-see approach.”