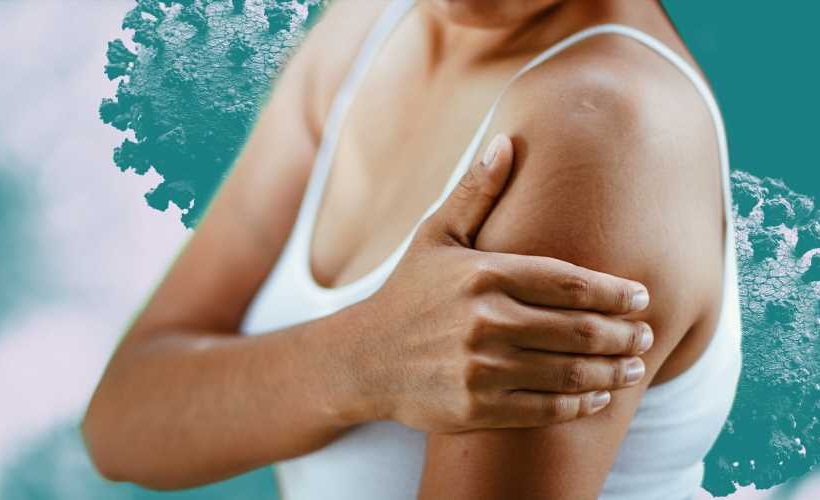 What makes this side effect a little unusual is that it doesn't appear straight away. "Typically, it shows up 5-9 days after the first shot," Dr. Jaliman says. That makes it different from most vaccine side effects, which usually occur within a day or two.

Chris Gilbert, MD, PhD, experienced "COVID arm" after she had her first dose of the vaccine. "I thought I was done with the side effects when, on day seven after the vaccine shot, as I was going to bed, I started itching at the injection site," she wrote on Psychology Today. Gilbert didn't think much of it at the time and fell asleep, but when she woke on day eight, her right upper arm was very itchy. "A red, round lesion about two inches in diameter was at the place where I had the shot," she wrote.

The good news: "COVID arm" is a brief, harmless response. Experts are still trying to figure out exactly what's going on, but it's likely that it's simply part of the body's immune system response to the vaccine. "We want to reassure people that this is a known phenomenon," Esther Freeman, MD, director of global health dermatology at Massachusetts General Hospital told USA Today. "Having a big red splotch on your arm for a couple of days may not be fun but the reality is there's no need to panic and no reason not to get your second shot." According to Dr. Jaliman "[the rash] should go away within 24 hours to a week."

It should be noted too that the number of "COVID arm" reactions is still small: USA Today reports that there have only been 14 official reports of the rash in the global dermatological COVID-19 registry, though more cases may have gone unreported.

A small number of rash reactions were also reported in Moderna's clinical trials, as detailed in an article published in The New England Journal of Medicine. The authors revealed that delayed-injection site reactions, characterized by redness, hardness, and tenderness, were noted in 244 participants after the first dose and in 68 participants after the second dose.

"COVID arm" hasn't happened in people who've had the Pfizer vaccine. The reasons for that aren't clear, but it shouldn't turn people off the Moderna vaccine. "It's difficult to know why people react to one and not the other," Dr. Jaliman said. "It would only be speculation."

The "COVID arm" reaction has also reportedly shown up more in women, though the association there is unclear as well. "We do have more cases that are being reported in women, but that could be that women are more likely to tell you," Kim Blumenthal, MD, an allergist and epidemiologist and professor of medicine at Harvard medical school, told USA Today.

Women have experienced more side effects from Moderna's COVID-19 in general, too. According to a meeting of the CDC's Advisory Committee on Immunization Practices on January 27, women account for 77% of the Moderna vaccine's reported side effects, with a median age of 43. But that could simply be because women make up a large part of the population's health care workers, who received the vaccine first, according to Tom Shimabukuro, MD, US Public Health Service Vaccine Safety Team lead for the COVID-19 response at the Centers for Disease Control and Prevention. Women may also be more likely than men to report side effects from the vaccine.

The CDC website doesn't currently mention any delayed reaction to the Moderna vaccine, but lists the common side effects—usually starting within a day or two of getting the vaccine—as pain, swelling, and redness in the arm where you got the shot, plus chills, tiredness, and headache throughout the rest of the body.

Overall, the delayed reaction shouldn't prevent people from getting their second shot, Dr. Jaliman says, but she recommends getting it in the other arm.

To help ease the itching, she suggests an antihistamine like Benadryl, or a topical steroid. Ice would help reduce the swelling, she adds. Remember, it's not an infection and doesn't need antibiotics. But if the symptoms last any more than a week, or you experience swelling or pain anywhere else in your body, make an appointment with your doctor just to be on the safe side.

And if you experience any side effects at all after your vaccine, you're also encouraged to report them to either of the CDC's vaccine safety and tracking systems: the Vaccine Adverse Event Reporting System (VAERS) or V-safe.