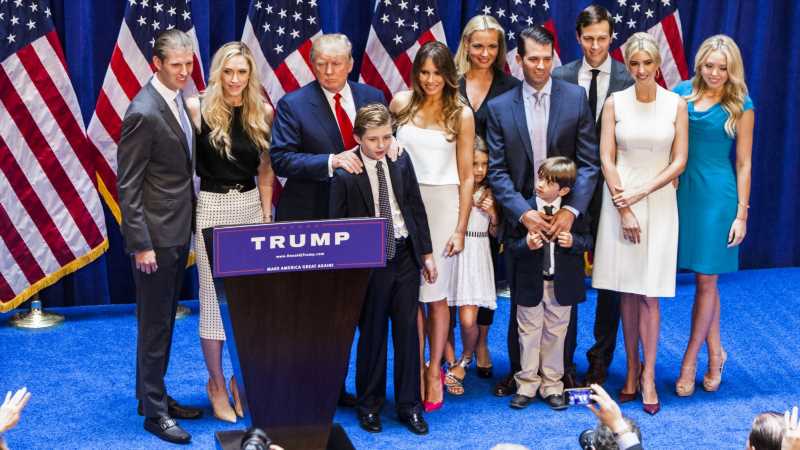 President Donald Trump has been married three times, and has five kids — Barron Trump is his youngest child, and the son of his current wife, Melania. The 14-year-old has four older siblings: Ivanka, Donald Jr., and Eric are the children of Trump’s first wife, Ivana. Meanwhile, Tiffany Trump is his sister from the POTUS’ second marriage to Marla Maples. Now that you’ve gotten the Trump family tree straight, one has to wonder what Barron’s relationship is like with each of his older brothers and sisters.

By many accounts, the Trumps have a good relationship despite their patriarch having wed and divorced many times. At least, they present a united front in public, especially at high-profile events to support their father. But since Tiffany, Barron’s sibling who is closest in age to him, is still 12 years his senior, it’s likely the teen grew up mostly on his own. And, it’s worth noting there has been some familial strife to speak of in the past. Town & Country reports that at one point, Trump’s three older children attempted to cut Tiffany out of her inheritance.

By the time Barron was born in 2006, Tiffany was no longer living in New York with her father. Trump and Maples divorced in 1999 and mom and daughter moved to Los Angeles where Maples raised Tiffany as a single mother according to Business Insider. Barron would be raised in Trump Tower in New York, where he had an entire floor to himself (via Biography). But Tiffany would move back to the East Coast to attend college and law school.

How much time Barron spent with Ivanka, Donald Jr., and Eric growing up is not well documented, but they do appear in many photos together at family events. One example is a Thanksgiving dinner at Mar-a-Lago in Florida where Ivanka and Barron are seen sitting at their father’s table, along with Tiffany (via Town & Country). But there was a period of time when Barron lived in New York with his mother while his father and Ivanka got settled in Washington, D.C. following Trump’s inauguration. When asked why Melania and Barron didn’t move to the White House right away, the family said they wanted him to finish school and also, keep disruptions to a minimum following a grueling campaign (via The Washington Post).

The older Trump children are closer to one another

Given that Ivana’s three children grew up and collaborated in business together from an early age, it’s safe to say Ivanka, Donald Jr., and Eric are very close (via Biography). According to The Washington Post, the brothers have said they are inseparable. The outlet reports Eric looked up to Donald Jr. growing up and considered him a role model, and that at least before their father became President, had breakfast together every weekday at Trump Tower.

Notably, Ivanka, Donald Jr., and Eric have been very prominent figures in their father’s campaigns both in 2016 and 2020, and to a lesser extent, so has Tiffany — she gave a speech at this year’s Republican National Convention. But likely due to Barron’s age, he is not seen as much on the campaign trail. Perhaps this difference in lifestyle between him and his older siblings means he is not as close with them as they are with each other. To be fair, Barron’s priorities are simply different at this point in his life. Rather than stumping for his father, the young man attends St. Andrew’s Episcopal prep school in Maryland.

The Trump kids all have something in common

In addition to being the children of the most talked-about person in the world, Barron Trump definitely has another thing in common with his famous siblings — they have all grown up in the public eye, with their every move chronicled and dissected (via USA Today). From the time Barron was born, he has been photographed everywhere he goes. The least public of the commander in chief’s kids nevertheless had to learn how to act poised at public events like his father’s inauguration, at a relatively young age. Of course, with these responsibilities comes tremendous privilege. As Melania said about her son’s imagination growing up in Trump Tower, “If he draws on the walls in his playroom, we can paint it over” (via Biography).

Perhaps these shared experiences, both positive and negative, explain the ultimate camaraderie among Barron and his siblings. In one image of the family taken at the RNC in Ohio in 2016, Barron can be seen bumping fists with his oldest brother (via USA Today). Perhaps the underlying message was, “Hey, I get you brother.”