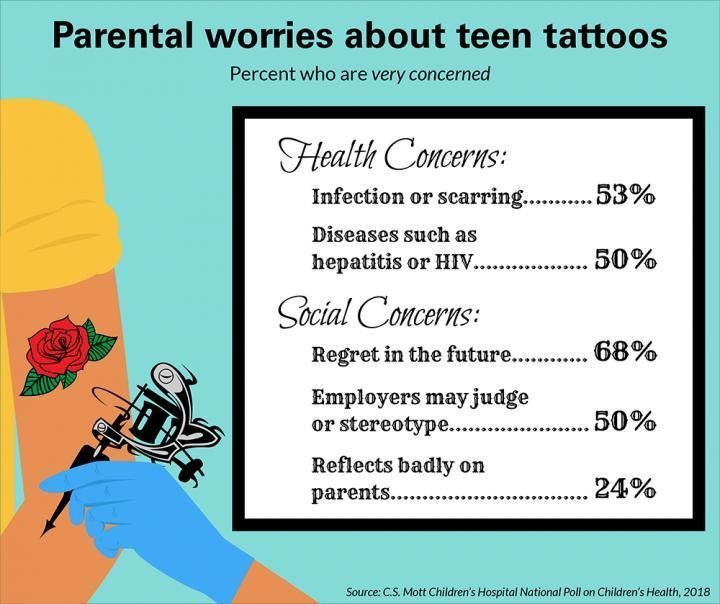 Seventy-eight percent of parents in a national poll had a clear answer when asked how they would react if their own teen wanted a tattoo: absolutely not.

However, another 1 in 10 parents thought a tattoo would be OK as a reward, to mark a special occasion or if the tattoo could be hidden.

And many parents have already faced these types of conversations, with a quarter saying their teen has asked about a tattoo, according to the C.S. Mott Children’s Hospital National Poll on Children’s Health at the University of Michigan.

Topping the list of parental concerns about tattoos: impact on health, social acceptance and their child’s professional career.

Roughly half of parents said they were very concerned about negative health effects, such as infection, scarring or transmission of diseases, such as hepatitis or HIV, through unsanitary needles.

Half of parents were also very concerned that employers might judge or stereotype their teen unfavorably if they had a tattoo, while 24 percent were very concerned that a tattoo would reflect badly on the parents themselves. The most common concern (among 68 percent of parents): future regret.

“Many parents agree that tattoos are a form of self-expression but worry that teens may not consider potential health risks, how a tattoo may impact them professionally or the chance that as they age and mature, they may regret getting a permanent tattoo.”

A 2017 report by the American Academy of Pediatrics suggested tattoos and piercings among young people are becoming more mainstream and that pediatricians need to be prepared to discuss potential health risks with adolescents. The report cited a Pew Research Center study that said about 38 percent of young people ages 18 to 29 have at least one tattoo.

“In addition to doing their own research and having conversations at home, parents may encourage their teens to talk to their doctor if they ask for a tattoo,” Freed says.