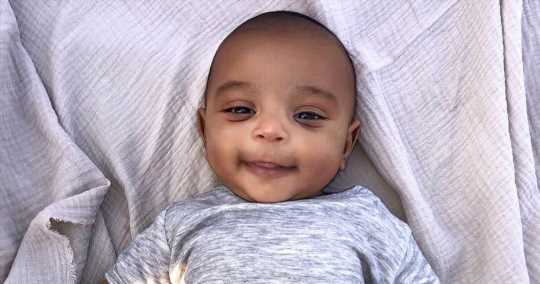 Baby No. 4! Kim Kardashian and Kanye West welcomed their second son, Psalm, on May 9 via surrogate.

Although the reality star, who also shares North, Saint and Chicago, with the rapper, revealed the following day that her baby boy “looks just like” Chicago, she waited one week to share a photo of her son.

“Psalm West,” she captioned a screenshot of a text message exchange with her husband at the time. “Beautiful Mother’s Day with the arrival of our fourth child,” the Grammy winner texted. “We are blessed beyond measure. We have everything we need.”

West sent a photo, as well, featuring Psalm asleep in his crib. Since the little one’s crib was crowded with blankets and a bumper, many people expressed concern over the infant’s sleeping arrangements.

The KKW Beauty creator, who also shares North, Saint and Chicago with the “I Love It” singer, didn’t share another photo of her son until June. The second shot was close up, revealing that Psalm does in fact resemble his older sister Chicago.

After adding her fourth baby to her brood, the E! personality felt content, a source told Us Weekly exclusively in June.

“Kim absolutely loves being a mom and feels like her family is complete now, with two boys and two girls making it even,” the insider said. “She feels like she spaced each child out just enough where it isn’t too overwhelming for her.”

Keep scrolling for a look at Psalm’s most precious moments.