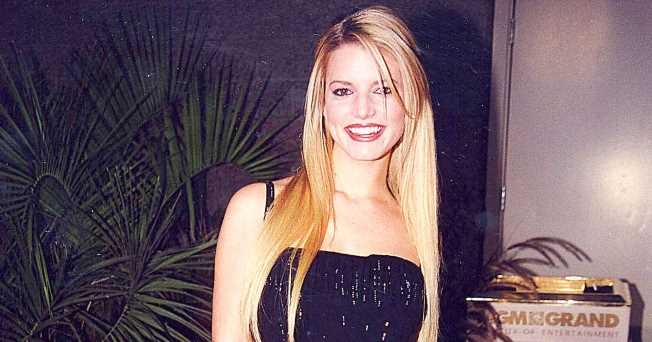 Perhaps more than most celebrities, Jessica Simpson has been a body chameleon over the years.

Part of the reason we’ve seen the Jessica Simpson Collection designer’s full body evolution is that she’s been in the spotlight since age 19 when her 1999 debut album, Sweet Kisses, was released. Instantly known as a blonde bombshell with a killer voice, the Texas native and daughter of a minister soon became a full-on cultural phenomenon when she starred in the MTV hit reality series Newlyweds: Nick and Jessica with her now ex-husband, Nick Lachey.

With a tan and toned frame, the “In this Skin” singer was a fitness sensation from the very start of her career. And her reputation for hotness only grew when she starred alongside Johnny Knoxville in the 2005 remake of The Dukes of Hazzard. As Daisy Duke, Simpson’s lean and muscular legs practically became a star in their own right.

Never afraid to show off her assets, Simpson wore bold clothes on the red carpet and the streets from the start. During the early aughts, that meant plenty of crop tops and super-low pants that highlighted her abs.

One fashion misstep while performing at a chili cook-off in Florida in 2009 — the infamous mom jeans incident — soon became more famous than her disastrous romances with John Mayer and Tony Romo. It also led to bullying over her fuller figure. “It’s unfair,” she told Redbook in 2014 of being scrutinized. “What woman wants to be brought down for wearing a pair of jeans?” The relatable star told Oprah Winfrey in an interview later that year that she stood by her pants choice, and even enjoyed a corndog before taking the stage. “I love my curves,” she said. “I’m not ever going to be a size zero and I don’t want to weigh 90 pounds.”

With news of her first pregnancy in 2011, Simpson’s weight and size were in the news once again. After she welcomed her daughter Maxwell in 2012, trolls still mocked Jessica — even when she lost 60 pounds in five months and became a Weight Watchers spokesperson. But she didn’t let the criticism bother her. “I’m not a supermodel!” she told USA Today at the time. “My body is not bouncing back like a supermodel. I’m just your everyday woman who is trying to feel good and be healthy for her daughter, her fiancé and herself … I feel like everybody can do what I am doing.”

After welcoming her second child, son Ace, in 2013, she resumed her WW gig, and the actress showed the world once again that she could shed weight when she wanted. Finally, Simpson made post-pregnancy body headlines when she announced in September 2019 that she had lost 100 pounds in just six months after having her third baby, daughter Birdie, with husband Eric Johnson. “6 months. 100 pounds down (Yes, I tipped the scales at 240 😜),” she captioned her svelte Instagram photo. “So proud to feel like myself again. Even when it felt impossible, I chose to work harder.”

Much of that work has been done with celebrity trainer Harley Pasternak over the years, who had her hitting up to 14,000 steps a day on her Fitbit. After her third time dropping the pregnancy pounds, Pasternak shared his admiration for the dedicated star on Instagram. “Beyond proud of this incredible woman. Been working together for over 12 years and she’s always the most warm, sweet, polite, and respectful person in the world. And on top of it all, after being nonstop pregnant for as long as I can remember, she’s down 100 pounds and looks younger today than she was when we met,” he wrote.

Scroll through to see Simpson’s amazing body evolution over the years.