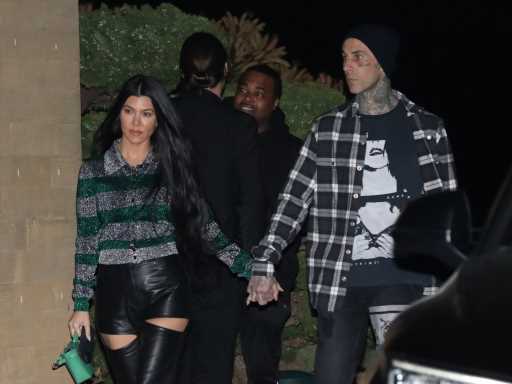 Kourtney Kardashian and Travis Barker still have that engagement glow but the couple is reportedly making future baby plans.

“They will have a baby together without any doubt, it’s just a matter of when and how,” an unnamed source told Us Weekly on Friday. “Ideally, Kourtney would like a natural birth. She’s confident it won’t be a problem because she’s always been lucky to conceive naturally and has taken great care of herself physically. … Certainly though, she and Travis want to bring their own child into the picture, and if she can’t conceive, they’ll look at other alternatives.” While on Wednesday, a source told People that Kardashian would “love” to have a baby with Barker.

The couple, who got engaged Sunday on the beach in Montecito, California, have children from previous relationships: The KUWTK star shares son Mason, 11, daughter Penelope, 9, and son Regin, 6, with ex-partner Scott Disick, while the Blink-182 drummer shares daughter Alabama, 15, and son Landon, 18, with ex-wife Shanna Moakler.

Since making their relationship official in January, Kardashian and Barker have formed connections with each other’s children (Barker is teaching Penelope how to play the drums and Kardashian earned the “stepmom” title from Alabama long before the engagement). So a potential new baby is not entirely unexpected — in March, Kardashian revealed that two years prior, she had frozen her eggs “for peace of mind” while she debated a future pregnancy.

Blended households must balance the fragile emotions of stepchildren with their primary relationship and an “ours” baby that’s biological to the couple can both bless and complicate new families. According to the American Academy of Pediatrics, sibling rivalry, new routines, and family divides, are just several hurdles blended unions face in the beginning stages of their new lives. We see that last issue reflected in headlines about how Disick is coping with his ex’s happiness and Moakler sharing a “Temporarily closed for spiritual maintenance” message on Instagram after the engagement news broke.

From what we’ve observed of the Kardashian-Barkers, the new family seems blissful. We wish them the best of luck, baby or no baby.

Childbirth is nothing like in the movies, as these beautiful photos show.