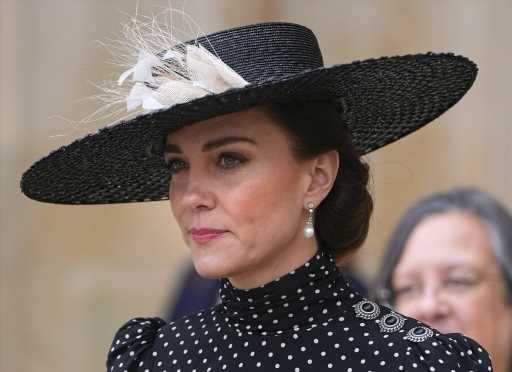 As many members of the royal family are flying to Scotland to be by Queen Elizabeth II’s side, Kate Middleton is juggling parenting duties at home in Berkshire.

The Duchess of Cambridge was photographed leaving Windsor Castle in England, per the Daily Mail, as her children Prince George, 9, Princess Charlotte, 7, and Prince Louis, 4, are currently having their first day of their new school at Lambrook School. So far, it seems she has stayed behind to pick up her kids while the rest of the royals are either in Scotland or en route for fear of the Queen’s health.

Buckingham Palace released a statement today, which said, “Following further evaluation this morning, The Queen’s doctors are concerned for Her Majesty’s health and have recommended she remain under medical supervision. The Queen remains comfortable and at Balmoral.”

The new Prime Minister Liz Truss sent out a statement on Twitter, “The whole country will be deeply concerned by the news from Buckingham Palace this lunchtime. My thoughts — and the thoughts of people across our United Kingdom — are with Her Majesty The Queen and her family at this time.”

Prince William, Prince Harry, Meghan Markle, Prince Charles, Camilla, Prince Andrew, Prince Edward, his wife Sophie, and other royals are reportedly on their way to Scotland today, where they join Princess Anne in a bedside vigil by the Queen, per the Daily Mail. For now, Middleton is remaining in England supposedly to pick up her kids when they get out of school.

We can only imagine how difficult it must be for Middleton to not rush to the Queen’s side with Prince William and the rest of the family as the monarch’s health seems to be rapidly declining. What was meant to be a joyous first day of school has turned suddenly scary as the family gathers to support the Queen. Yet, a mother’s job never ends, and Kate had to choose between two very important family events today — and at this point, opting to be there with her kids has taken precedence. Chances are, she will probably travel with them to visit the Queen as soon as she can.

Even royal kiddos love to be read to! Here are some of their favorites.