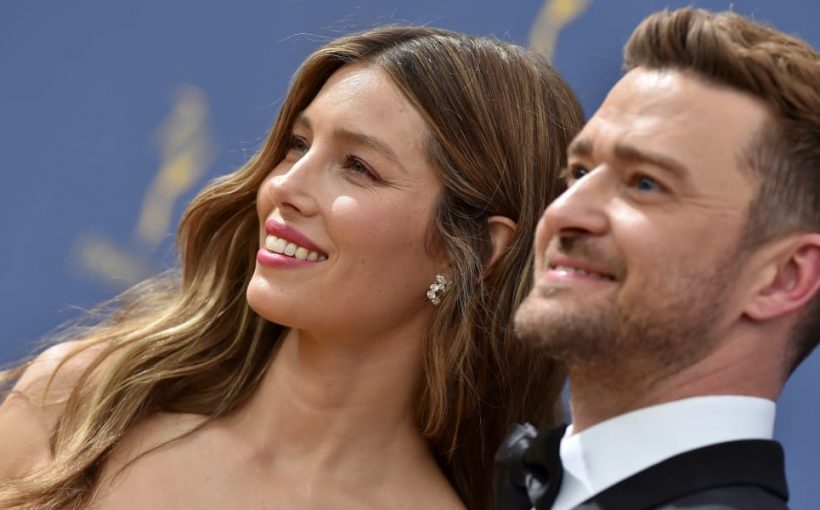 Nope, that sign flashed by Jessica Biel and Justin Timberlake on the red carpet at the 70th Primetime Emmy Awards was not an Illuminati deal. Sorry, conspiracy theorists. It was actually their special secret sign for their son, Silas, who had to sit out the festivities due to this thing called bedtime.

The happily married pair served up joint interviews on the red carpet, but clearly, their fave part of the evening was their hello to Silas, now 3.

Access Hollywood‘s red carpet crew members were the lucky ducks who caught the sweet moment. The network tweeted a video clip, saying: “Parenting is a full time job, even on the #emmys red carpet! @jtimberlake and @JessicaBiel send their 3-year-old son Silas a special signal that absolutely melted our hearts.”

Timberlake posted on Instagram a super-glam shot of them headed to the Emmys with the simple caption: "We got a babysitter. #Emmys."

Biel wasn’t complaining about her Emmy nom for lead actress in a limited series, though. When the couple chatted with E! Live from the Red Carpet, The Sinner actor raved, "It means everything to me. To be nominated for the first time for this, it’s just an absolute, massive honor and a dream and it’s just wonderful. I’m just very, very excited.”

Meanwhile, Timberlake beamed at his wife. Yeah, it’s rough to be Jessica Biel.

“I’m more geeked out than she is,” Timberlake said. “I found out about the nomination before she did — she was in Europe, actually, when the nominations came out — but, yeah, I was there to watch her option this and develop it from scratch… I saw how much she put into it. And so, I’m just so proud to be here and see this happen for her.”

Could they be any cuter?