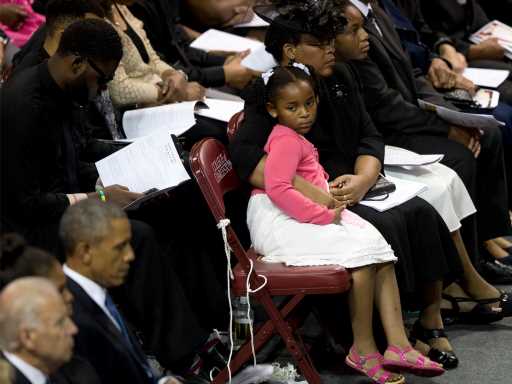 Barack Obama was president during some of the toughest times our nation has faced in the last 75 years. Mass shootings, multiple wars, and an increasingly divisive partisan government meant his stay in the White House while raising daughters Sasha and Malia was far from idyllic. In episode 3 of his Spotify podcast with Bruce Springsteen, Renegades: Born in the USA, what started out as a discussion about music quickly morphed into Obama remembering some of his darkest days in office: the Charleston church shooting and the Newtown massacre.

The entire nation remembers Obama’s moving eulogy for State Senator Clementa C. Pinckney, the pastor of the Emanuel African Methodist Episcopal Church in Charleston, S.C. He sang “Amazing Grace” and the entire nation wept. Springsteen, like so many of us, was curious about that moment. “What I really want to ask you about, of course, is ‘Amazing Grace’because that really that shook the whole country,” he asked during the podcast. “And how on that day, did you come to decide to sing that song?”

“I actually had met the pastor, Reverend Pinckney, in previous visits to South Carolina,” explained Obama. “He had two little girls that were a little younger than Malia and Sasha. And this was coming on the heels of just, it seemed like every three months some mass shooting.”

“I had thought that after Newtown when 20 6-year-olds had been gunned down in this fashion by a deranged young man–who had basically an arsenal in his house,” he continued. “I thought all right, well, Congress is gonna do something about this. And the most angry I think and disappointed… the closest I ever came to just losing hope about this country was probably after efforts for modest gun safety laws were defeated … never even really got called up in the Senate. After 20 children had been slaughtered like that.”

Many parents feel the same way. Our first graders are practicing lockdown drills, our teens are afraid to go to school, and it’s easy to lose hope when we see gun sales at an all-time high.

On the eighth anniversary of the Newtown massacre, then President-Elect Biden gave parents a small glimmer of hope. “Eight years later, there have been plenty of thoughts and prayers, but we know that is not enough,” the president-elect said, according to ABC News. “Together with you and millions of our fellow Americans of every background all across our nation, we will fight to end this scourge on our society and enact common-sense reforms that are supported by a majority of Americans and that will save countless lives.”

We can imagine the depth of pain former President Obama felt as he sang out “Amazing Grace” while looking at Reverend Pinckney’s two young daughters, and as he thought about all the young lives lost at Sandy Hook. We can imagine it because as parents, we felt it too.

These celebs know the importance of talking about race and racism with their kids.