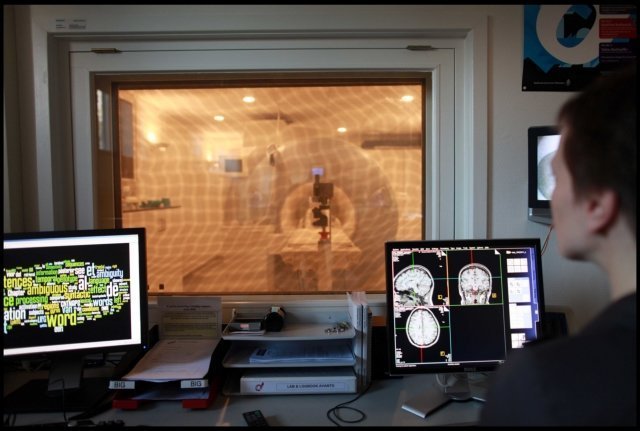 Owing to decades of neurobiological linguistic research, we know a lot about how language functions in the brain. Still, psycholinguistic research often misses important factors due to its limited attention to the context and language we use every day. Time for a new, interdisciplinary approach that is closer to natural language use, language researchers Roel Willems (Radboud University), Uri Hasson (University of Trento) and their colleagues propose in an article in Cognition.

Every night, I drink a glass of wine before I go to bed. This sentence is easy to understand, but it will evoke a slightly different response when said by a ten-year-old girl. Roel Willems and his colleagues use this sentence from a previous study conducted at Nijmegen to illustrate that context is leading for language comprehension. For a complete picture of language processing in our brain, we should therefore take this context into account and ask questions such as: Do the conversational partners know each other? What is the speaker’s intention? What emotions play a role here? Roel Willems explains that traditional psycholinguistics ignores such factors. “We already know a lot about language and the brain, but this knowledge is based on experiments that are far removed from the everyday world. How much do we really know about the way in which ‘real’ language works in our brain? It is high time, therefore, to investigate language in natural contexts.”

The traditional approach has brought us less far than we hoped, the linguistic researchers from Nijmegen and Italy suggest. According to Willems, “Classic linguistic research often studies phenomena that are irrelevant in practice, for example the often-used experiments in which subjects are asked to label pictures with predetermined words. What does this tell us about ‘real’ situations? This also applies to the artificially constructed sentences used in this research, such as She prepares a sandwich with socks on. When I give a lecture, I notice that people often snigger when I use such examples. People would never formulate such a sentence in their every-day conversations.”

Willems and Hasson call on the discipline to exchange the current methods applied to study language for an approach that is closer to realistic language use: “I certainly do not want to suggest that past experiments are useless, but researchers can make more use of the options and techniques that are now available to study language in natural contexts,” says Willems.

Nijmegen is ready for change

Willems’ colleagues in Nijmegen have various ideas about such ‘natural’ contexts. He himself investigates what cognitive processes occur when people read stories and imagine what they read. “Some colleagues feel that this is still too far removed from reality and go one step further. Judith Holler of the Max Planck Institute, for example, studies what happens during conversations, which is probably the most natural way in which language is used.”

Although their approaches differ, therefore, Willems does notice that the stance of his close colleagues is shifting. “The Max Planck and Donders institutes do a lot of classic language experiments. For example the world-famous Ki-Ka experiment devised by Frans Donders himself. But even there, the interest in ‘real’ language use is growing. Peter Hagoort, a renowned scholar, for example, also increasingly conducts experiments in more realistic settings, to supplement the somewhat one-dimensional classic studies,” Willems explains. “At the same time, there is clear opposition. The reactions to our article are highly varied; we already noticed this during the publication process.”

In addition to promoting the study of language processing in everyday life, the authors wish to stimulate interdisciplinary collaboration. In their article, they present a proposal for a new framework that is less language-centric: “We have known for quite some time that there is no stable linguistic network in the brain. There are many more areas in the brain – for example the visual centres – involved in language comprehension than the classic language centres. Our brain links up all these networks all the time. If you have a particular outlook determined by your discipline, you often tend to overlook those other areas. We can learn a lot from each other if we combine all these perspectives, which would lead to a much more complete and less static picture. Traditional disciplines such as neurosciences, psychology, linguistics and biology should join hands to create such an overall vision.”