Home » Health Problems » Restless Legs Syndrome: Quiet Your Feet and Get Back to Sleep 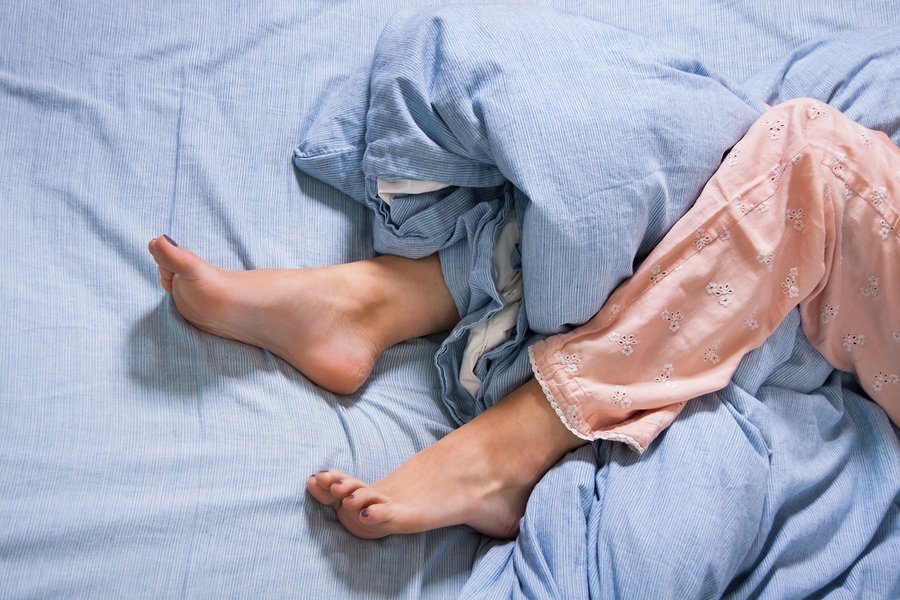 Allie McIver is constantly bouncing her legs. It gets worse at night, especially if she’s been too sedentary that day. It’s a feeling she describes as similar to an itch — or an overwhelming desire to move her legs – that starts at the ankle and sort of runs up the leg. When she’s lying in bed at night, she’s often compelled to violently shake her legs, usually one leg at a time. Sometimes she gets up and does jumping jacks and squats, which doesn’t really help.

McIver has Restless Legs Syndrome (RLS), or Willis-Ekbom Disease, a neurological disorder that causes an irresistible urge to move the legs, often accompanied by unusual or unpleasant sensations, according to the RLS Foundation. Symptoms may involve arms and other body parts and most often occurs in the evening, which can severely disrupt sleep and reduce quality of life.

Onset can occur anywhere between childhood and late adulthood, says Dr. Ondo, but the majority of people present with RLS in their 40s or 50s. The RLS Foundation says that patients can often trace symptoms back to their childhood and remember hearing things like “those are growing pains” or “quit wiggling so much.”

Almost every study shows that RLS affects women more than men by nearly a 2-1 margin, says Dr. Ondo. Why? Experts don’t exactly know. “The main pathology of RLS patients has shown a reduction in brain iron,” says Dr. Ondo. “Women on average have lower iron levels than men, so the main hypothesis is that low body iron increases RLS risk in women.”

Additionally, about 20 percent of women develop RLS during pregnancy but symptoms often disappear after childbirth, says the RLS Foundation. This usually occurs in the third trimester, adds Dr. Ondo.

While a single cause of RLS hasn’t been found, research has uncovered important information. At least six genes are known to increase the risk of RLS, and many people with RLS have a family history. In addition to iron deficiency, it’s also associated with renal failure and possibly nerve injury (neuropathy), says Dr. Ondo. He says certain medications – especially sedating antihistamines – can worsen it as well.

RLS is a lifelong condition, unless it was secondary to pregnancy, iron deficiency, or renal failure, says Dr. Brian Koo, a member of the RLS Foundation’s Scientific and Medical Advisory Board and Director of the Yale Centers for RLS. If these “temporary” symptoms are corrected or end naturally, RLS can go away.

Dr. Ondo describes RLS symptoms as being circadian by definition, worse at night and minimal in the morning. “The intensity of RLS symptoms could range from mild, a couple times a month, to severe, where they might occur 20 hours a day, every day,” he says. It’s basically worse during periods of inactivity.

McIver has heard people misidentify themselves as sufferers if they have pent-up energy or are overly caffeinated. She says the feeling of RLS forces your legs to move, almost of their own accord. “It is not the same as just feeling a burst of energy that makes you want to bounce or jiggle your legs,” she says.

Just reading the list of symptoms from the RLS Foundation illustrates how this isn’t just about feeling fidgety. The organization says you may be diagnosed with RLS if your symptoms:

A diagnosis is made through evaluating symptoms and eliminating other conditions that may be confused for RLS.

Marlene Heller was diagnosed with RLS at least ten years ago. “My legs (mostly left) liked to go for walks without me in the middle of the night…to the other side of the bed, which would wake up my husband,” she says. “There is pain associated with it, mostly in my left thigh, calf, and shin, but not at the same time.” She says having RLS is miserable, painful, and makes sleeping with a partner hard. Having a king-sized bed helps.

One problem with dopaminergic agents is that a common side effect is augmentation. This is when symptoms are relieved at night, and eventually start to develop earlier in the day and spread from the legs to arms and trunk. Increasing the dosage worsens the symptoms.

Dr. Ondo says that iron supplementation can be helpful, but iron pills are poorly absorbed and usually only help modestly. Intravenous iron is increasingly being used. Magnesium, stretching, and exercise are alternative treatments, says Dr. Koo.

McIver hasn’t tried any medications but has tried vitamin supplements like iron, magnesium, and potassium, but they mostly just irritate her stomach. She’s tried calf exercises and various stretches, but doesn’t find relief. The only thing that has helped her is making sure she tires her legs out sufficiently during the day, which means exercising daily. For her, the length of the exercise is also important; she has to do a minimum of 30 minutes of leg-focused exercise. While it’s difficult for her to go without exercise for a day because she knows she’ll have trouble sleeping due to RLS symptoms, it’s sometimes hard to fit into a busy schedule.

Only one thing has helped Heller. She discovered by accident that the Vibe Tech One, strength training vibration therapy equipment – which is used in physical therapy at the facility where she works – has made a difference. After a ten-minute treatment, she didn’t experience RLS for four months. Then it returned, so now she makes it a point to go back on it every few months. Unfortunately, this is still new and isn’t universal yet. However, it’s FDA and Medicare approved, but not for RLS.

Heller says RLS doesn’t “look” like a disability or a disease. She can’t be comfortable at a movie or in a place where she needs to sit still for a long time. She’s always aware of her legs and feet and the amount of room around them. “Will I be able to get up?” she wonders. “Can I take my shoes off? Will I annoy people if I try to stretch my legs out? On an airplane, can I get an aisle seat? Because the pain is always present when I am in a tight space.”

McIver says more than anything, having RLS is annoying. “It’s frustrating to have a condition that isn’t painful or serious, but that does affect your daily life,” she says. “Others don’t understand what the big deal is, so it’s difficult to explain the frustration.” She calls RLS a relatively unknown or misunderstood condition. “I wish there was more common knowledge about it so people realize it’s a real thing!” she says.