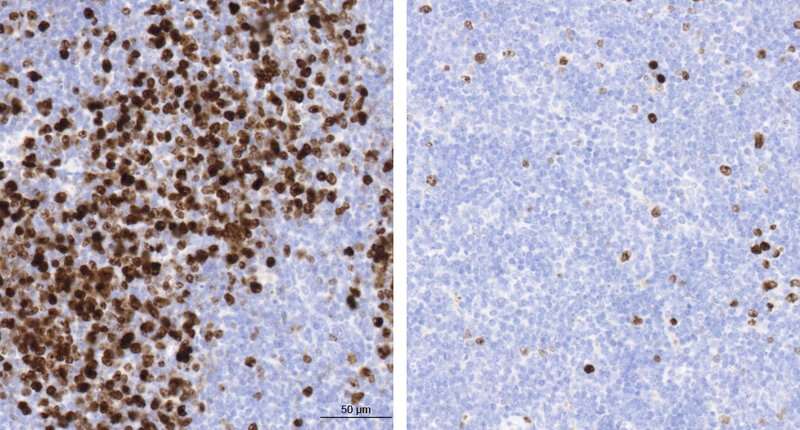 Cancer deploys a vast array of resources to grow: from instability in its genome to inflammation, as well as the creation of new blood vessels, the microenvironment surrounding the tumour, and the use of mechanisms that allow it to be immortal, among others. At the National Cancer Research Centre (CNIO), the Metabolism and Cell Signalling Group, led by Alejo Efeyan, is studying how cancer uses one of these resources, nutrients, for its own advantage, focusing on an important metabolic pathway coordinated by the mTOR gene. Now, in the journal Nature Metabolism, this team has identified the role played by this pathway as the origin of follicular lymphoma and proposes the exploration in future studies of a possible therapeutic strategy using a drug that is already being used in clinical practice to treat other tumours.

Follicular lymphoma is a type of cancer that appears in the white blood cells of the lymphatic system, resulting from the uncontrolled growth and proliferation of these cells in the immune system. It affects 5-7 people out of every 100,000, making it the second most common type of lymphoma, and its prevalence is on the rise. This form of cancer has a long survival period, owing to its slow progression, but there is not yet any cure: over time, patients stop responding to the limited treatment options available.

Its cause and origin are found in the immune system. In order to respond to the attack of a pathogen (a virus or bacteria, for example), the different cells that make up this system (B cells, T cells, macrophages) multiply and organise themselves into an army to attack the pathogen. This army sets up a communication architecture between the cells that breaks apart when the pathogen has been eliminated and the immune response needs to be shut down/eliminated. However, in some anomalous cases, this architecture stays in place, the growth of the B cells involved in this response gets out of control, and gives rise to a tumour, follicular lymphoma. The genetic causes for this phenomenon are still unclear.

Researchers have previously observed that one in every six patients with follicular lymphoma presents mutations in RagC, a gene on the mTOR signalling pathway. mTOR can be defined as an orchestra conductor of cells, because it integrates molecular signals via different informants to dictate and coordinate cell growth. One of the informants on the mTOR signalling pathway is RagC, which acts as an on/off switch, enabling mTOR to trigger cell growth only in the presence of the nutrients and energy required to supply the growth of the battalion of B cells. To know whether RagC mutations were behind the origin of follicular lymphoma and were not simply a consequence of the genetic chaos inherent in tumours with multiple mutations, CNIO researchers worked with two mouse models: the first was a classic model for the study of this disease, which shows a chromosome translocation found in the immense majority of cases of follicular lymphoma. The second was created using the new CRISPR-Cas9 gene-editing technique, in which they induced the mutation in RagC.

“What we have seen is that, with the mutation we have induced in RagC, the protein encoded by this gene is always switched to the on state,” explains Efeyan, leader of the Group and principal author on the study. “As a result, the B cells involved in an immune response believe they have nutrients to grow and they do so without control. Our study confirms that mutations in RagC are at the origin of the disease, and, therefore, this is the first in vivo evidence of the role played by RagC in promoting tumours, alongside the genes that inform mTOR of the presence of nutrients for growth.”

Therapies against the ‘deafness’ caused by mutations in RagC

Exploration of this pathway is interesting for researchers, because it has a pharmacological intervention that, if confirmed through future studies, could be transferred over to clinical practice fairly swiftly: mTOR inhibitors such as rapamycin, already approved for other types of tumours, such as kidney cancer, which, by switching this pathway off, controls its anomalous growth. “When we used rapamycin to treat mice with RagC mutations, they had a prolonged positive response, living for longer and with less aggressive lymphomas,” said Ana Ortega-Molina, the lead author on this paper. “Although these treatments do not offer a complete cure, the delay in the progression of a tumour that is already slow-growing in itself could have major implications for the survival of patients.”

Although only lymphomas with RagC mutation displayed a long-lasting response, the mice that only contained chromosome translocation also responded positively to the therapy, which indicates that the mTOR pathway is important in all types of follicular lymphoma, regardless of their origin.

The researchers believe that the fact that this anomaly particularly affects the B cells involved in an immune response could be due to the accelerated proliferation capacity characteristic of these types of cells, which need to increase their army as quickly as possible when the body is under threat, making them more sensitive to the lack of nutrients and mutations in these genes.

The researchers were particularly surprised that, when there is a mutation in RagC, these cells appear to become deaf to other kinds of cell communication signals, not only the ones that make them believe there are nutrients available for growth, but also others, such as those that warn that the pathogen they think they are responding to is already under control and that the army should stand down. “If we want to attack them with therapies that eliminate the signals from their surroundings so that they stop proliferating, we would have to identify the ones that are indifferent to this strategy and try to remedy that deafness so that therapies can take effect,” concludes Efeyan.