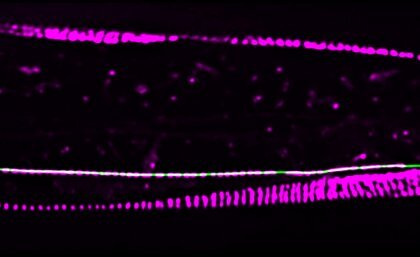 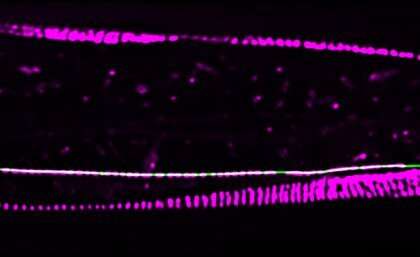 A way in which some connections between brain cells can resist degeneration—a hallmark of traumatic brain injuries and neurodegenerative diseases—has been discovered by researchers at The University of Queensland.

“Our brain cells communicate with one another via electrical signals sent through long cable-like structures called axons which, just like electrical cables, need to be protected and maintained to work properly,” Dr. Coakley said.

“Axons are only one 50th the width of a human hair, so are extremely vulnerable to damage—the loss of connections between neurons has devastating consequences for the brain.”

Professor Hilliard said axons are under constant strain as the body moves, for example, in your legs and arms as they bend and stretch during everyday tasks.

“In the roundworm C. elegans, the axons that carry messages about the sense of touch are embedded in the skin of the worm, which we found actually serves to protect them and resist mechanical strain,” Professor Hilliard said.

“The axon is glued to the surrounding skin and when this adhesion is faulty, the simple movement of the worm provides enough force to snap the axon in half.”

Using a mix of genetics and high-resolution microscopy, the researchers discovered a set of molecules that control the strength or ‘stickiness’ of this adhesion and are essential to preserve the structure and function of axons.

“Remarkably, these molecules are present in species throughout the animal kingdom, including mammals, which indicates they may perform a similar role,” Dr. Coakley said.

“These molecules shed light on ways in which these fragile axons are protected from deterioration in healthy individuals and how that might go awry in disease states.

“Despite the description of axon degeneration more than 100 years ago, we are still striving to understand how these essential connections are kept intact.”