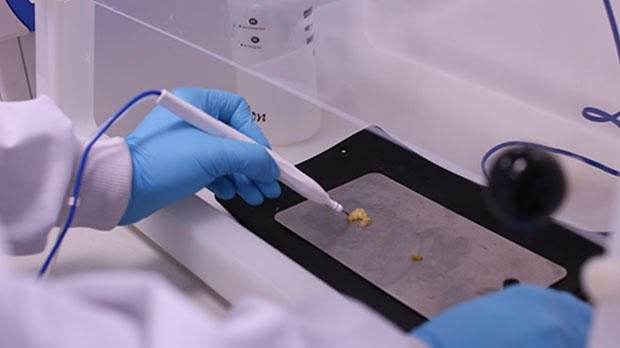 Surgery is a major part of ovarian cancer treatment, but it can be a blunt tool.

A big problem for surgeons is knowing what they’re cutting. It can be difficult to tell whether a lump in the ovary is cancer or benign. This makes it difficult to tailor the operation.

“At the moment, we take women into theatre who have suspicious ovarian or pelvic masses and we do a full clearance surgery, removing the uterus and cervix, both ovaries and fallopian tubes,” says Dr. David Phelps, a Cancer Research UK-funded surgeon at Imperial College London.

“Two weeks later we get the pathology report back and find out the mass isn’t cancer in some cases, so we’ve been too radical with the surgery.”

But there are risks with less radical operations too, warns Dr. Sadaf Ghaem-Maghami, Consultant Subspecialist in gynaecological cancer surgery at Imperial College London. “Women can have surgery to remove only one ovary and then discover they have cancer. In this case, a second surgery is needed,” she says.

In an ideal world, surgeons would know for sure which type of tumour they’re dealing with whilst they’re operating. And thanks to an experimental device called the surgical intelligent knife (iKnife) and research recently published in the British Journal of Cancer, surgery could be heading in that direction.

What is the iKnife?

The iKnife is a surgical tool with a difference. It does more than just cut, it’s programmed to detect the type of tissue it’s cutting, while it’s cutting.

It was invented by Professor Zoltan Takats at Imperial College London. To make the iKnife, Takats and his team hooked up a standard surgical knife to what’s essentially a very accurate molecular weight scale, otherwise known as a mass spectrometer.

As the knife burns through the tissue molecules are released from the tissue in a puff of smoke, which can be sucked up and analysed by the mass spectrometer.

Scientists can use this to build up a picture of different tissues to tell them apart.

“With the iKnife we’re able to analyse the individual components that make up different tissues and tell them apart,” says Takats. “So, in surgery, you would know exactly what type of tissue you’re cutting through.”

The iKnife is already being put through its paces for breast surgery, and Ghaem-Maghami, Phelps and team wanted to see if it might make a difference in surgery for ovarian cancer.

The team began by testing samples taken during surgery and comparing the results with pathology reports.

“We’ve shown that we can diagnose ovarian cancer in the lab using the iKnife, distinguishing it from normal tissue with 100% accuracy,” says Phelps. “It’s a hugely exciting result.”

The iKnife can also identify the different parts of the reproductive system, such as the ovaries and fallopian tubes, with 93% to 100% accuracy.

“Borderline ovarian tumours are more common in younger women, so it’s important we get the diagnosis and the surgery right,” says Ghaem-Maghami. “The iKnife could help us to tailor our approach so we preserve fertility wherever possible.”

The team are still some way off using the iKnife to help make decisions during surgery. According to Ghaem-Maghami, the next step is to start using it more regularly in theatre.

“Based on the strength of the results, we’re looking to run a clinical trial to test if the iKnife can identify ovarian cancer in a surgical setting,” she says.

They’ll also continue to build up their database of sample readings. “I don’t think we’ll ever be finished adding to the dataset – the more data you put into it the more accurate it will become,” says Phelps. This is particularly important for rarer types of ovarian tumour.

Ovarian cancer and beyond

It’s not just ovarian cancer that could benefit from the iKnife. Scientists are testing the iKnife in breast cancer in a Cancer Research UK-supported trial.

They’re also testing if the iKnife could help brain tumour surgery. A big consideration for this type of surgery is removing the whole tumour without damaging healthy brain tissue. “Using the iKnife to identify, in real-time, where the margins of brain tumours are has fantastic potential,” says Takats.

There’s a lot more work to do before we’ll know if the iKnife can make cancer surgery smarter, but the benefits could be huge.