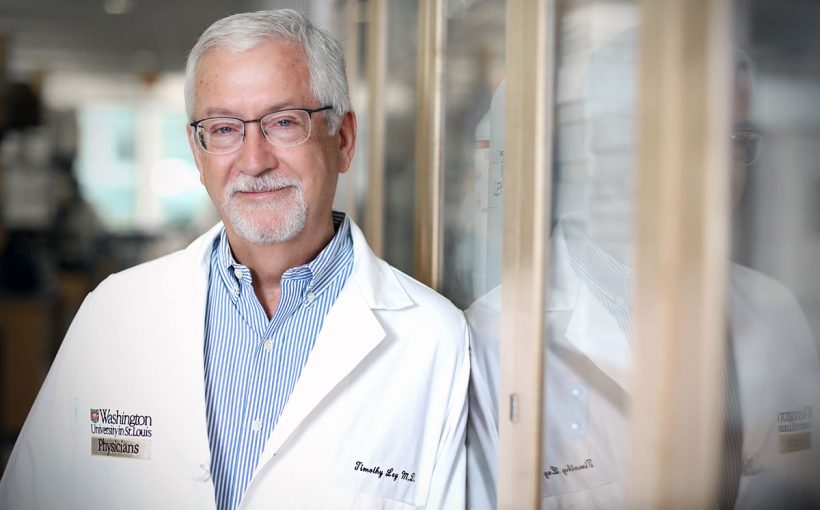 Washington University investigators at Siteman Cancer Center at Barnes-Jewish Hospital and Washington University School of Medicine in St. Louis have been awarded a $15 million grant to better understand the genetic changes that drive acute myeloid leukemia (AML), a deadly blood cancer, and predict patients’ responses to therapy. The findings also may enable investigators to develop more effective therapies tailored to patients, based on the genetic characteristics of their cancer cells.

The grant, funded by the National Cancer Institute of the National Institutes of Health (NIH), allows for the continuation of work by a team of researchers with complementary expertise in AML, drawing on their unique strengths in basic and translational research.

Funding from this grant, and from a direct gift from Alvin Siteman, allowed this group to sequence the first human cancer genomes (from AML patients) in 2008 and 2009, setting the stage for the entire field of cancer genomics. Separately in 2018, the School of Medicine also was awarded a $11.5 million grant for leukemia – a Specialized Program of Research Excellence (SPORE) grant, making Washington University a national hub for innovative leukemia research and leadership in developing new therapies for leukemia patients.

One of the biggest challenges in treating AML is that even when patients achieve remission, the cancer usually returns. The five-year survival rate is low, about 28 percent — but even lower for older patients with the disease. Research by Washington University investigators has shown that certain mutations in a patient’s AML cells — and whether they are cleared with initial therapy — can help to predict the aggressiveness of leukemia and response to treatment. The new grant will help researchers better understand the interplay of mutations and the gene expression patterns that they alter, which will help them understand why some patients relapse and others don’t.

“This grant is having a direct impact on how we approach patients,” said principal investigator Timothy J. Ley, MD, the Lewis T. and Rosalind B. Apple Professor of Medicine. “Today, every single patient with AML who comes to Siteman gets some kind of genetic analysis for their cancer. The mutations in their leukemia cells help physicians select the best treatment option.

“For example, sequencing patients’ cancer cells at presentation, and again after initial therapy, is providing a better understanding of who really needs a stem cell transplant and who will do well without one,” he said. “This is important because a stem cell transplant comes with its own risks. It’s important to identify patients who don’t need that procedure so we don’t put them through it unnecessarily.”

Ley and his colleagues have contributed to an understanding that even in the bone marrow of a single patient, leukemia cells are not all identical. The cancerous cells are also a moving target, evolving and adapting to different treatment strategies. One type of treatment might destroy many AML cells but leave behind a subset of cells that have a slightly different set of mutations. That subset then has room to expand and contribute to relapse. This grant has supported research analyzing how tumors respond and evolve during therapy, which could lead to new treatments for patients whose cancer returns after a period of remission.

The work also has uncovered roles for the so-called epigenome in cancer development and progression. The epigenome is another layer of regulation that controls how genes are turned on or off, and can contribute to cancer even in the absence of obvious mistakes in the DNA sequence. New techniques to study the epigenetic changes involved in cancer — along with a new strategy called single-cell sequencing, which allows a look at the RNA expression profile of each cell of a tumor rather than a mixture of all cells — stand to help researchers analyze tumors in unprecedented detail.

“Single-cell technologies will allow us to better understand subsets of tumor cells that emerge and evolve and are changed by chemotherapy, whether they’re sensitive or resistant to it,” Ley said. “Interpretation of this new data is going to be incredibly challenging, but we already can tell from the work we’ve done recently that this technology is going to let us address questions that were confusing even a couple of years ago.

“Studying cancer is a bit like opening sets of Russian nesting dolls,” Ley said. “You uncover one layer, and there’s another layer of complexity underneath, and so on. But we’re getting closer. There are only so many ways this can happen, and our computational capacities are reaching a point where we can make sense of such complex datasets. We benefit tremendously from the expertise at McDonnell Genome Institute, where every new tool that is known to genomic science is rapidly adopted for the benefit of investigators here.”

With the latest renewal, the grant will support four research projects:

The work also is supported by four core research resources that integrate the activities of the program project grant.

Core A is led by Peter Westervelt, MD, PhD, a professor of medicine, and Sharon E. Heath, a senior clinical research coordinator. This core enrolls all of the patients for sample banking and assembles their clinical data. Core B is led by Jacqueline Payton, MD, PhD, an assistant professor of pathology and immunology. This core manages and distributes all of the samples in Siteman Cancer Center’s Tissue Procurement Core.

“When we first started talking about sequencing the genomes of human cancer cells in the early 2000s, it was considered an outrageous idea,” Ley said. “People thought we were a little crazy. But it was ultimately successful, and the strategy took off, and those early studies have served as a blueprint for using genome sequencing to understand this disease.”

Ley described the complexity of the disease by giving an example of two patients whose diseases look identical at presentation. But, he explained, one might relapse after standard therapy and die within six months, while the other also gets standard therapy and is apparently cured.

“Why are the outcomes so different? We think about half of it is explained by the DNA sequencing and how the tumor is organized and what the mutations are,” Ley said. “But the other half is still pretty mysterious. Our goal over the next five years is to understand the other half. And now, we may have the technology to do it.”