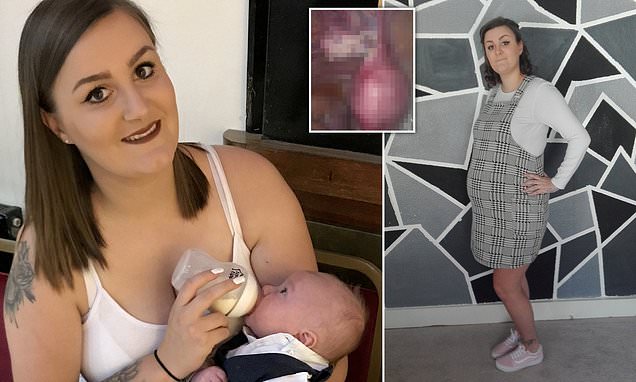 Woman, 22, who suffered three failed pregnancies discovers she has rare condition that turns her uterus into ‘an acid bath and POISONS the unborn babies’

A woman who suffered three failed pregnancies discovered she had a rare condition which was turning her uterus into an ‘acid bath’.

Callie Hayes, 22, had two miscarriages and an unsuccessful round of IVF before an internal ultrasound revealed the truth.

Doctors found that Mrs Hayes was suffering with hydrosalpinx, where a fallopian tube is blocked with a watery fluid.

In Mrs Hayes’ case, her damaged left fallopian tube was leaking fluid into her uterus, preventing any embryos from implanting properly.

The care assistant from Sheerness, Kent, chose to have her damaged tube removed in the hopes of improving her fertility, and thankfully, she fell pregnant just two weeks later.

Teddy was born on 27th May 2019 after three years of Mrs Hayes trying for a baby with her partner, Ben Hayes, 28. 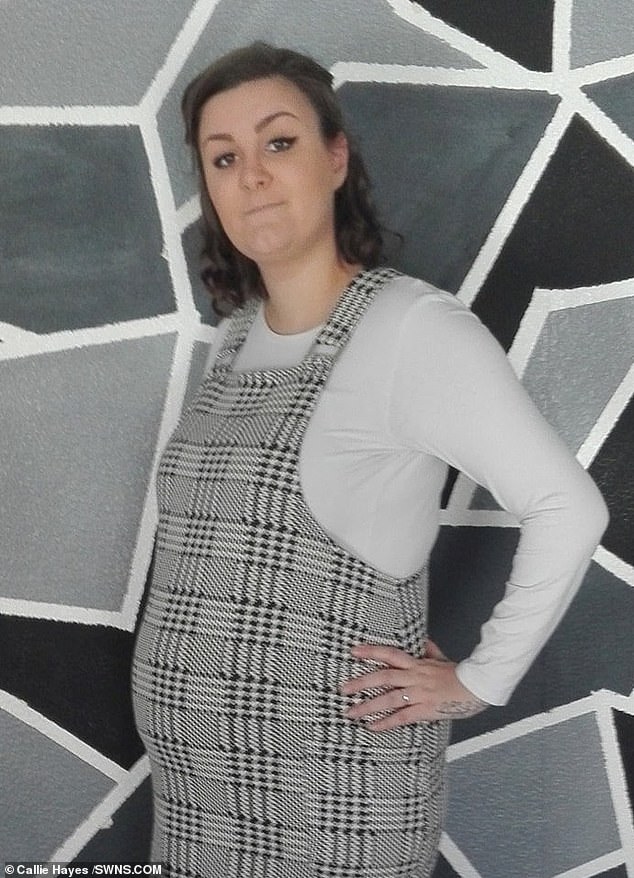 Callie Hayes, 22, suffered two miscarriages and a failed round of IVF. Doctors told her a blocked fallopian tube was causing her uterus to be bathed in an ‘acid bath’. She is pictured 22 weeks pregnant with her first born child 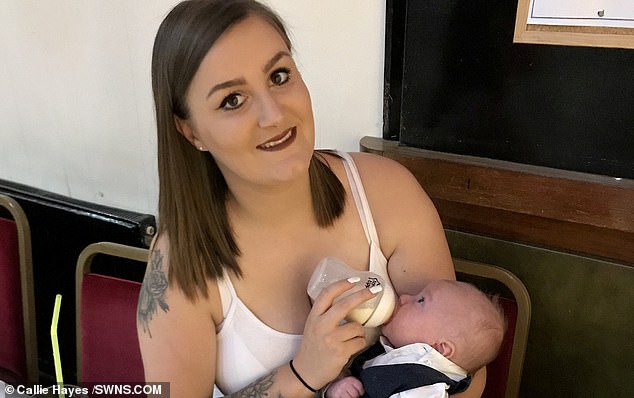 After having surgery to remove the tube, Mrs Hayes is now mother to Teddy, born in May 2019

Mrs Hayes said: ‘Hearing that I had this condition that I’d never heard of before was absolutely terrifying.

‘After two miscarriages and a failed round of IVF, it was also a bit of a relief to finally have an answer for why I’d been struggling to fall pregnant for three years.

‘Doctors described it to me as if the liquid had been giving my uterus an acid bath every month, so I’d been essentially poisoning my unborn babies by accident.

‘I was heartbroken, and although there was no guarantee I’d be able to fall pregnant after the tube was removed, I had to give anything possible a try.

‘I had the surgery, and within just two weeks, I was pregnant, and now I’m finally a mum to a gorgeous and healthy little boy.’

Mr and Mrs Hayes first started trying for a baby in February 2015.

Within three months of meeting in a nightclub, the couple were engaged. But their baby dreams were not coming true.

Finally in June 2017, Mrs Hayes discovered she was pregnant, but their joy was short-lived when she miscarried just five weeks later.

She soon found out that she was pregnant again in August 2017 but suffered a second miscarriage at five weeks, just six weeks before her wedding day.

She said: ‘I’ve always wanted to become a mum, and when I met Ben, we both decided to start trying straight away. 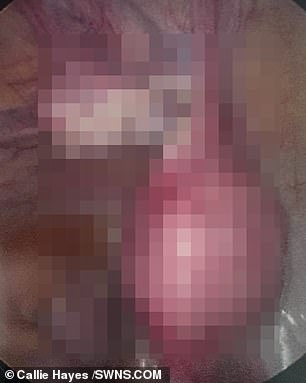 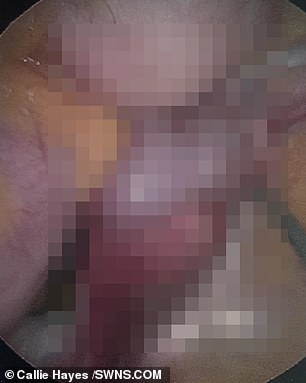 An internal ultrasound revealed Mrs Hayes was suffering with hydrosalpinx, where a fallopian tube is blocked with a watery fluid 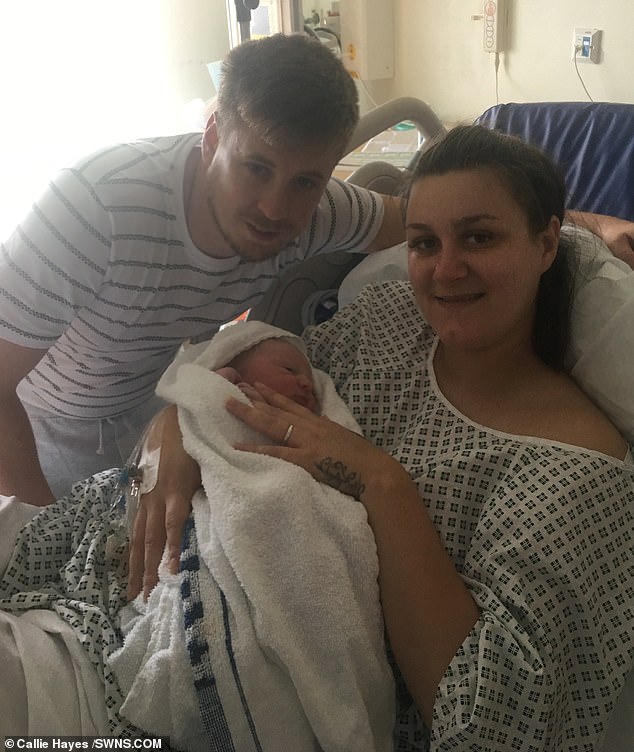 Hydrosalpinx is a type of fallopian tube disorder where the tubes are blocked with a watery, clear liquid.

There may be more than one cause of hydrosalpinx, but the most frequent cause is a previous pelvic infection, the most common of these being chlamydia and gonorrhea.

Prior pelvic surgeries, adhesions, endometriosis, and certain tumors may also cause hydrosalpinx.

The main symptoms are pelvic pain and abnormal discharge. In many cases, hydrosalpinx produces no symptoms.

Often, infertility is a symptom in itself and failed pregnancies are what lead to a diagnosis.

Fallopain tube problems account for 25–35 per cent of female infertility and hydrosalpinx is present in 10–30 per cent of all patients undergoing IVF, according to The Department of Obstetrics/Gynecology, Centro Hospitalar do Porto, Portugal.

‘We were over the moon when I fell pregnant, but then to go through two miscarriages in three months was absolutely devastating, and especially just before our wedding.

‘It was so hard to prepare everything that needed to be done when all I wanted to do was lay in bed and not face anyone or anything.

‘I thought about my second miscarriage constantly on my wedding day as we had actually planned to announce the pregnancy at our wedding.

‘It was so difficult to make it through the day without getting upset, and without constantly thinking about how I should be pregnant.’

After three years of struggle, the couple decided to try IVF in August 2018 but the treatment was unsuccessful.

Doctors performed an internal ultrasound where they discovered Mrs Hayes’ left fallopian tube was blocked due to the condition hydrosalpinx.

Symptoms include abdominal and pelvic pain and unusual vaginal discharge.

But some sufferers of hydrosalpinx have no symptoms and only discover they have the condition after several unsuccessful pregnancies. 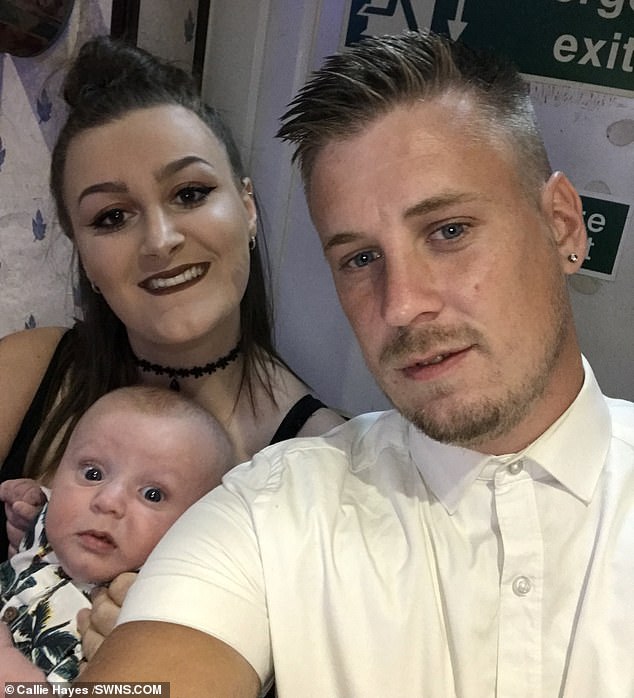 The couple, pictured with Teddy, decided to try IVF in August 2018 but the treatment was unsuccessful 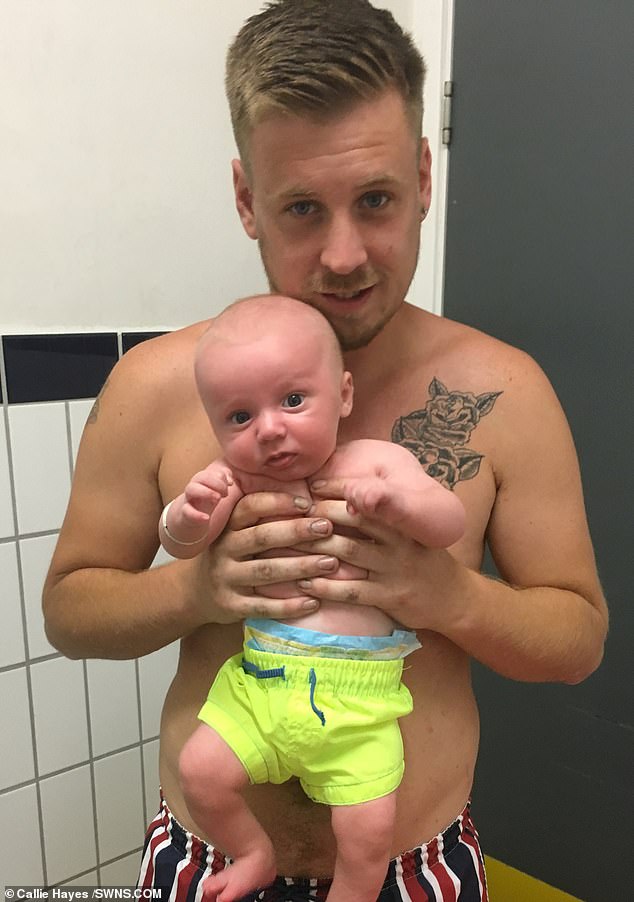 Within two weeks of the operation, Mrs Hayes was pregnant with Teddy

The egg cannot pass down the tube when the fallopian tube is blocked with fluid.

It is still possible to conceive with only one fallopian tube. However, sometimes the fluid can also leak into the uterus and stop the embryo implanting.

Mrs Hayes was offered two treatment options – clipping the damaged tube, or having it removed altogether.

She said: ‘I could have had my left fallopian tube clipped, but it wasn’t definite that it would work and the poisonous liquid could still leak into my uterus.

‘The only way to stop the liquid completely was to remove the damaged tube altogether, which would obviously reduce my chances of falling pregnant.

‘I was terrified I might never get my dream baby, but there was a glimmer of hope and I just had to grab it and pray.’ 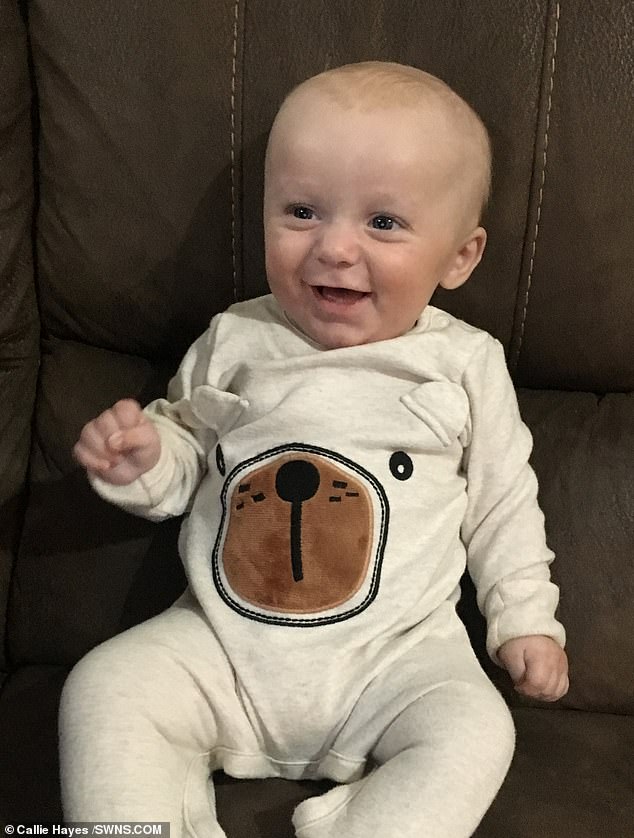 Teddy is now five months old, despite Mrs Hayes thinking her dreams of a baby were ‘over’

According to Mrs Hayes, her tube was so damaged it had swollen to almost ten times as big as normal.

The hopeful couple wasted no time in trying for a baby again, and within two weeks, Mrs Hayes was pregnant.

Terrified of another miscarriage, Mrs Hayes had extra scans throughout her pregnancy.

Now she is mother to Teddy, five months, and is speaking out about her experience to raise awareness of her condition.

She said: ‘I’m so glad I had surgery to remove the tube, because within two weeks, I was pregnant with our gorgeous little boy.

‘Teddy is our miracle baby, and he’s just the most wonderful little man, and always making us laugh with his cheeky smile.

‘Ben was my rock throughout it all, and I’m just so happy that we finally have our little family that we’ve been fighting for for so long.

‘I thought my diagnosis meant my dreams of becoming a mum were over, but now Teddy is here and Ben and I are the happiest we’ve ever been.’