Home » Health News » When asthma could actually be a heart problem 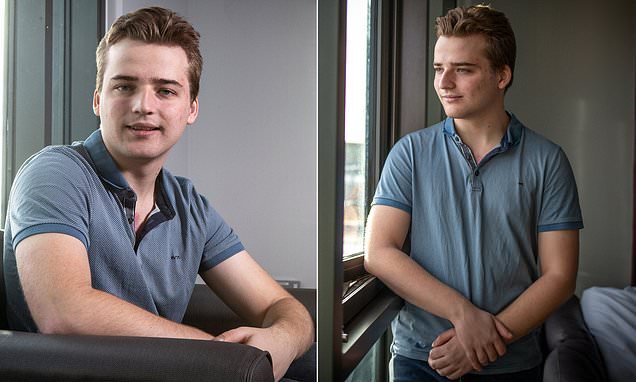 At school, Alastair Thompson struggled to keep up with his friends, and felt permanently out of breath, especially after exercising.

He was eventually diagnosed with asthma, but strangely, using an inhaler didn’t help.

‘I remember running cross country when I was about 13, and I was gasping so much that my PE teacher took me to one side and told me to see a doctor,’ recalls Alastair, now 20. ‘I was then diagnosed with asthma.’

Despite being given both reliever and preventer inhalers, Alastair, now at Bath University, grew increasingly tired and breathless. Over the years, he returned to the doctor several times and asked to try different medication but these made no difference. 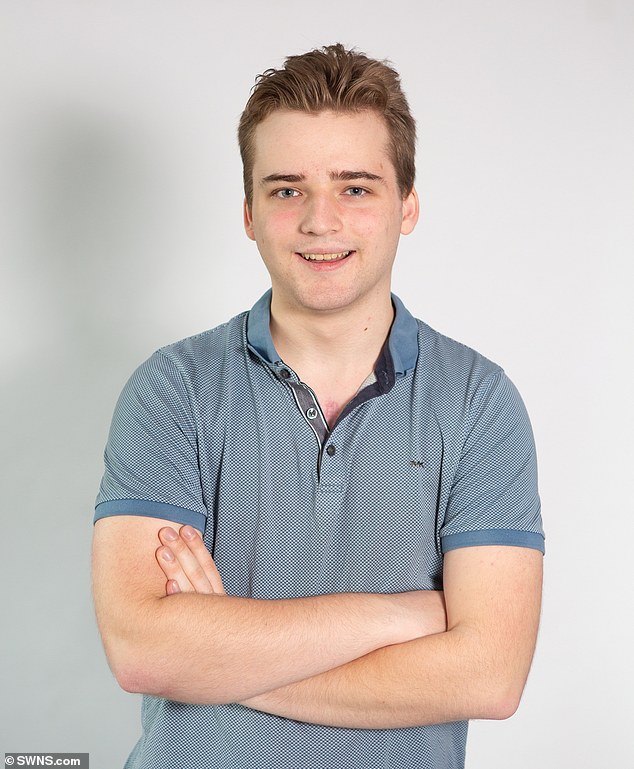 Hidden problem: Alastair Thompson, 20, was diagnosed with asthma but as a teenager but inhalers didn’t help him – so he sought a second opinion which revealed a shocking truth

Then, two years ago, Alastair was in a coffee shop with friends when his heart started beating so fast he thought he was having a heart attack.

He was rushed to hospital where his heart rate was found to be 240 beats per minute. The healthy resting heart rate for a man his age is between 60 and 100.

Alastair had an MRI scan, an echocardiogram (an ultrasound of the heart) and an electrocardiogram (or ECG, to record the heart’s electrical signals) which revealed a rare congenital heart defect called partial anomalous pulmonary venous drainage (PAPVD).

This occurs when up to three of the pulmonary veins that bring oxygenated blood from the lungs are connected to the wrong part of the heart, resulting in fatigue, breathlessness and ultimately, heart failure, where the heart is unable to pump effectively. He also had a hole in his heart. But he did not have asthma.

‘I was absolutely horrified,’ says Alastair. ‘All that time, I’d been treated for asthma, and instead I had a defective heart and was in danger of collapsing at any time.’

Like Alastair, a surprising number of heart patients are misdiagnosed with asthma.

A recent Canadian study found that 2 per cent of people told they had the lung condition actually had heart defects. This suggests that thousands of the 5.4 million people in the UK with asthma may have been misdiagnosed.

The problem is that breathlessness is a common feature of both, but doctors may not think to delve further. Fortunately for Alastair, his PAPVD was caught before it was too late and after successful open heart surgery, he feels completely well.

He says: ‘I was very lucky — when I spoke to other young heart patients in hospital, many of them had also been told they had asthma, and for some, the delay in diagnosis meant their hearts had become too weak for treatment. It made me very angry.’ 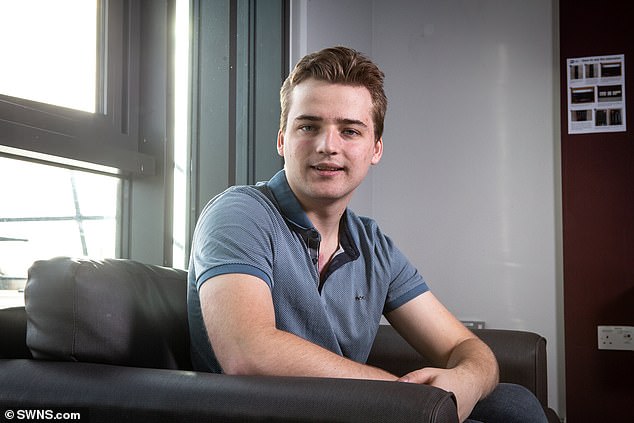 Stunned: ‘I was absolutely horrified,’ says Alastair. ‘All that time, I’d been treated for asthma, and instead I had a defective heart and was in danger of collapsing at any time’

Music therapist Tess Jewson, 28, was also wrongly diagnosed with asthma as a child, only to discover years later that her breathlessness was a sign of a very serious heart and lung condition.

‘I was forever going backwards and forwards to my asthma consultant and I tried every inhaler and steroid going, but none of them really made a difference,’ says Tess, who lives in Chelmsford, Essex.

Constantly short of breath, Tess took her mind off her poor health by throwing herself into music. She played the cello and the piano, and as a talented trumpeter despite her breathlessness, it was her dream to tour the world with a famous orchestra. But at 17, she collapsed with terrible chest pain on her way home from college.

A friend called an ambulance, and Tess was rushed to hospital. At first, doctors thought she was having a severe asthma attack, but tests showed that her heart was failing. Investigations revealed she actually had pulmonary hypertension, a life-limiting heart and lung condition.

Here the pulmonary arteries (the vessels that provide the lungs with blood and oxygen) become thickened or stiff, so can’t expand easily to allow blood through — as a result the heart must work extra hard to pump oxygenated blood back to the lungs.

This causes the right side to become enlarged and weakened, eventually causing heart failure. 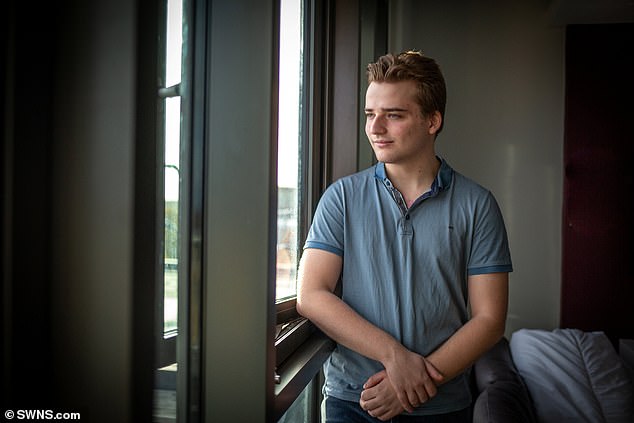 Fact: A recent Canadian study found that 2 per cent of people told they had the lung condition actually had heart defects – which means 5million UK people could be misdiagnosed

There is no clear cause, and no cure. Those affected experience breathlessness just as asthmatics do, but they will also have other symptoms, such as pain in the limbs and chest, swollen ankles and exhaustion.

Early treatment with a range of drugs is essential to prolong life, and in extreme cases patients will be offered a heart and lung transplant, although this is very much a last resort.

As the illness is relatively rare, it often goes untreated for a long time — recent research by the charity Pulmonary Heart Association (PHA UK) found that 40 per cent of patients surveyed saw four or more doctors before getting a correct diagnosis.

Such delays carry serious consequences, says Philippa Hobson, a senior cardiac nurse at the British Heart Foundation. ‘When people with a heart condition are misdiagnosed or have a delayed diagnosis, they miss out on receiving the correct and timely treatment that could then make their problem more difficult to treat.

‘These patients can end up feeling resentful and incredibly let down by the medical profession.’

Common heart conditions such as angina, heart failure, valve diseases and arrhythmias result in shortness of breath and can often be mistaken for asthma, says Philippa Hobson, a nurse at the British Heart Foundation.

She says: ‘If an asthma patient is still unwell after taking prescribed medication and mentions chest pain, palpitations or dizziness, an ECG (to record the heart’s electrical signals) should be done. This could diagnose a heart problem, rather than waiting for further symptoms to appear.’

It’s not just young people who are at risk, says nurse consultant Iain Armstrong, adding that with late onset asthma on the rise, doctors need to assess whether people of all ages have been given the right diagnosis.

Iain Armstrong, a nurse consultant at Royal Hallamshire Hospital, Sheffield, and chair of PHA UK adds: ‘Too many patients have to wait far too long for the correct diagnosis, which can have a very serious impact on their health.’

This was certainly the case for Tess, who after her collapse was told that she might not make it to her 18th birthday, nine months later. But although her heart was failing, it wasn’t as badly damaged as the doctors first thought, and she responded well to treatment.

‘Realising I was so dangerously ill was terrifying,’ recalls Tess, who remained in hospital for three months where she was given drugs to try to open up her pulmonary arteries.

Nevertheless, she was left to face the fact that she had an incurable heart condition that would get progressively worse. And as if that wasn’t bad enough, she was told that she would have to stop playing the trumpet as it would put too much pressure on her heart.

‘It felt like all my dreams had all been destroyed at once,’ says Tess. ‘If I’d been diagnosed with pulmonary hypertension as a child, I’d have made much less ambitious plans for my future. It was very, very hard to let my dreams go.’

Tess, who is married to Terry, 28, an electrical engineer, cannot have children as pregnancy would put too much pressure on her heart.

She also frequently needs oxygen to help with her breathing and takes sildenafil (brand name, Viagra) to help the blood vessels in her heart relax.

But Tess is determined not to dwell on these. ‘I’m a positive person and I feel lucky to still be here’, she says. ‘Not everyone is so fortunate.

‘Having a serious heart condition is hard enough. Being misdiagnosed really put my life on the line. I don’t want anyone else to have to go through the same thing.’