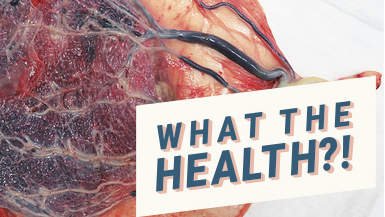 Pregnancy can be scary: Your body’s changing every day, you’ve got strange symptoms and pains, and it’s hard to know what’s normal and what’s not. Now, imagine heading to the doctor for a routine checkup and being told you have a rare complication that could be extremely dangerous for both you and your baby.

Today’s issue of the New England Journal of Medicine documents a patient’s experience with vasa previa, a condition in which the blood vessels that connect the fetus and the placenta end up close to or across the opening of the cervix, underneath the fetus—putting them at risk of rupturing during labor or vaginal delivery. It also contains some crazy photographs, so we can get an up close and personal look at what this condition really looks like.

The short article, part of NEJM‘s Images in Clinical Medicine series, focuses on a 37-year-old woman who visited her obstetrical clinic for an ultrasound at 27 weeks. The ultrasound revealed a low-lying placenta, meaning that the placenta was located low in the uterus, close to the cervix. This isn’t usually a problem all on its own (although it can be), but that’s not all the scan revealed.

Doctors also noticed that “rather than being inserted centrally on the placenta, the umbilical cord was affixed to the fetal membranes and tracked the surface of the membranes to the placenta,” the authors wrote. Further tests revealed blood vessels covering the cervical opening, indicating vasa previa.

According to the International Vasa Previa Foundation, this condition can cause serious fetal blood loss if these blood vessels tear when the cervix dilates or membranes rupture during labor or birth. It can also cut off oxygen if the vessels become pinched as they’re compressed between the fetus and the walls of the birth canal.

When vasa previa is identified, doctors generally recommend a cesarean delivery as soon as the fetus’s lungs are fully developed. The woman from the article underwent her scheduled C-section at 34 weeks, which is when her medical team was able to snap these incredible photos.

One image shows blood vessels crossing over the membrane covering the fetus’s head, while the other shows the exposed vessels merging to form the umbilical cord. (In a normal pregnancy, the vessels are completely contained in the umbilical cord and protected by a gelatinous substance called Wharton’s jelly.)

Vasa previa is rare—occurring in about one out of every 2,500 pregnancies. There are often no symptoms at all before it’s diagnosed via ultrasound, but it can occasionally cause painless vaginal bleeding in the second or third trimester. (To be safe, always report bleeding during pregnancy to your doctor!)

If vasa previa isn’t caught before a woman gives birth, fetal mortality rate is as high as 95%. Blood loss can be dangerous for the mother as well. But as long as vasa previa is spotted before a woman goes into labor (which is generally the case in developed countries, thanks to routine prenatal care) she and her child can be protected with careful monitoring and a C-section delivery.

In this case, the baby was born with transient tachypnea (a temporary breathing disorder common in pre-term infants) but recovered quickly. Both mom and baby were ultimately discharged home—with some really interesting hospital photos as souvenirs!