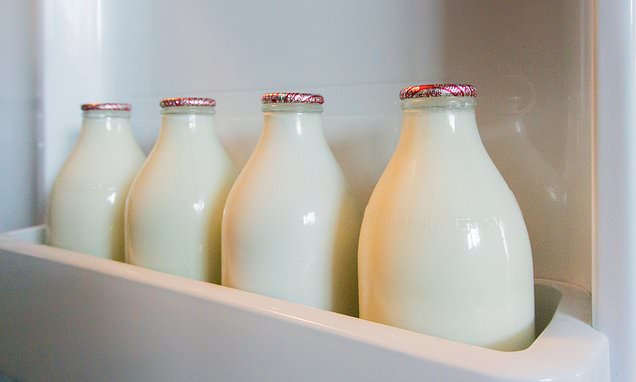 Drinking SKIMMED milk instead of semi-skimmed could slow down ageing and make your DNA 4.5 YEARS younger, study claims

In a study of almost 6,000 people, scientists analysed people’s genes and quizzed them about their diets and what type of milk they drank.

The age of DNA could be worked out by looking at the length of certain parts of chromosomes, which get shorter with age.

For every one per cent increase in the fat content of the milk someone drank, the researchers found, their DNA aged the equivalent of more than four years.

It suggests those who drink red-topped milk, which is around 0.3 per cent fat, may stay youthful longer than drinkers of blue-top milk, which is 3.6 per cent.

The scientists behind the study believe the saturated fat in milk puts stress on cells, damaging them and contributing to the death of tissues in the body.

But they could not prove their findings – that skimmed milk can prevent your DNA from ageing – because they only looked at the effects, not the causes. 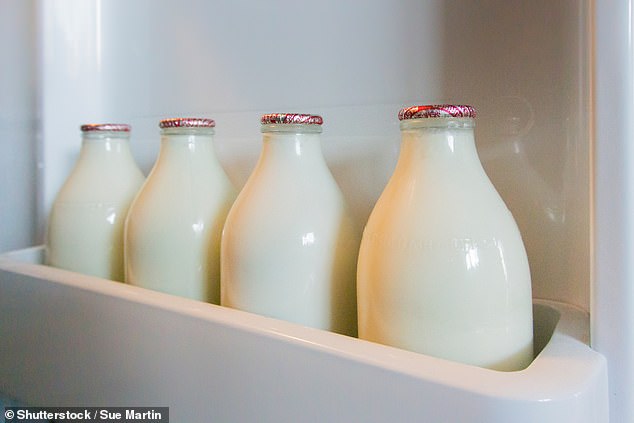 Drinking skimmed milk instead of semi-skimmed milk may add more than four years to your biological age, a study suggests (stock image)

Study leader Professor Larry Tucker said: ‘It was surprising how strong the difference was.

‘If you’re going to drink high-fat milk, you should be aware that doing so is predictive of or related to some significant consequences.’

The research used data from the the National Health and Nutrition Examination Survey, taking questionnaire answers from a total of 5,834 American adults.

Scientists at Brigham Young University, Utah, also looked at people’s biological age, which is a representation of how much damage has accumulated in various cells and tissues in the body.

To do this, they looked at the length of telomeres, which are tiny structures found at the ends of each of our chromosomes, which carry DNA.

They act in a similar way to the plastic bits on the ends of shoelaces, preventing the chromosomes from fraying.

As we age, these telomeres become shorter, our DNA becomes unstable and its ability to produce healthy youthful tissues diminishes.

Although actual age is the key factor accounting for the length of telomeres, other lifestyle factors can damage them and make them shorter.

For example, a smoker would have shorter telomeres than a non-smoker because the toxins in cigarettes cause cellular damage.

Researchers said for every one per cent increase in milk fat consumed, telomeres were 69 base pairs shorter.

This translated to four additional years of biological ageing.

The calculation was based on the fact that each additional year of chronological age cut 15.3 base pairs from telomeres in the participants’ DNA.

Just under a third of the adults reported consuming full-fat whole milk and another 30 per cent reported drinking two per cent milk.

WHAT IS BIOLOGICAL AGE?

Chronological age is the amount of time that has passed from birth to the present.

Biological age is a representation of how much damage has accumulated in various cells and tissues in the body.

It is also known as physiological or functional age.

Lifestyle factors such as diet, exercise, sleep and whether someone smokes affect biological age, as well as genetics.

For example, if a 25-year-old man ate a high fat and sugar diet, was mostly inactive, smoked and drank a lot of alcohol, he may have a biological age much older than 25.

There are various biomarkers in the body which can be used to measure biological age.

One of these is telomeres, which are found at the ends of each of our chromosomes, which carry our DNA.

They act in a similar way to the plastic bits on the ends of shoelaces, preventing the chromosomes from fraying.

As we age, these telomeres become shorter, our DNA becomes unstable and its ability to produce healthily youthful tissues diminishes.

One in 10 people in the study consumed one per cent milk and another 17 per cent drank non-fat milk. About 13 per cent did not drink any cows’ milk at all.

The researchers suggested some reasons behind the link. For example, high-fat milk drinkers were significantly more likely to consume saturated fat.

Milk itself is around two thirds saturated fat, which people are generally advised to moderate.

Saturated fat is thought to trigger inflammation in the body, alter gut bacteria, and increase oxidative stress on cells, which is damage in DNA promoted by fat that can lead to diseases.

The authors wrote: ‘It appears that the milk fat and cellular ageing association identified in this investigation was probably due, in part, to increased inflammation and oxidative stress caused by increased consumption of saturated fat.’

Professor Tucker said: ‘Milk is probably the most controversial food in our country.

‘If someone said do the opposite, I could also do that. At the very least, the findings of this study are definitely worth pondering. Maybe there’s something here that requires a little more attention.’

Surprisingly, the research also found people who did not drink any milk lived longer than those who consumed low-fat milk.

Professor Tucker said the study findings provide support for the current dietary guidelines which encourage adults to consume low-fat milk, both nonfat and one per cent milk, and not high-fat milk, as part of a healthy diet.

He said: ‘It’s not a bad thing to drink milk. You should just be more aware of what type of milk you are drinking.’

The findings are published in the science journal Oxidative Medicine and Cellular Longevity.