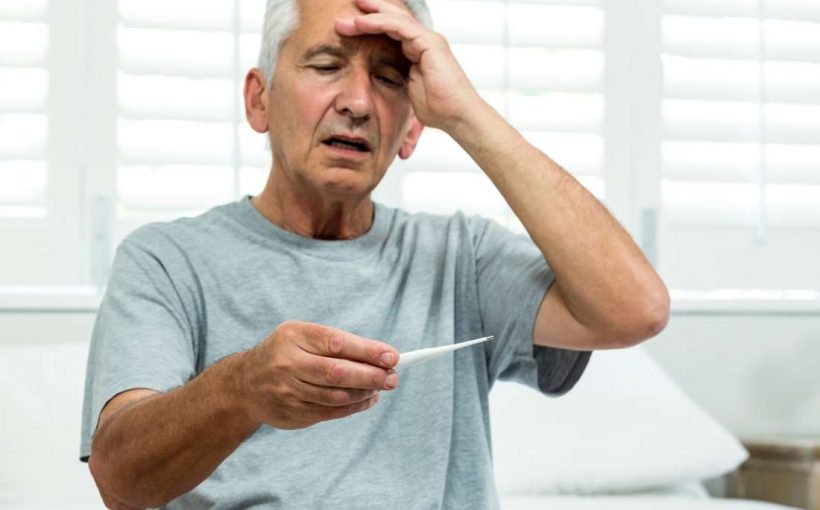 When thinking about the symptoms of rheumatoid arthritis (RA), swelling, stiffness, and joint pain often come to mind. However, RA can affect many of the body’s organs and cause widespread inflammation, which may lead to fevers.

In this article, we explore the causes, symptoms, and treatments of RA fever.

RA is an autoimmune condition, which means that a person’s immune system mistakenly attacks its own cells. This results in widespread inflammation in the joints, which causes the familiar stiffness, swelling, and joint pain.

A low-grade fever may also appear as part of the immune system’s natural response to fighting off infection.

The exact cause of RA fever remains unclear, but many people assume it is a result of chronic inflammation, which is the hallmark symptom of RA.

Research suggests that fever is a symptom of inflammation. Indeed, long-lasting, low-grade fever is a common symptom of some inflammatory and autoimmune conditions, including RA and lupus.

During a typical fever, the body’s temperature rises to 100–104°F. Doctors usually describe RA fever as a chronic, low-grade fever that lasts for a long time, as opposed to an acute infection, which results in a high fever.

Can RA medication cause fever?

In some cases, people with RA may experience fever as a result of their medication.

Doctors often prescribe medicines that suppress the immune system to treat RA. As a result, a person with RA may be more susceptible to viral or bacterial infections. This means they might be more likely to develop fevers. Anyone with RA who has a temperature of 100–104°F should seek treatment immediately.

Although the symptoms of rheumatic fever are similar to those of RA, the two diseases are not related.

Rheumatic fever is a severe inflammatory disease that develops from complications of strep throat. Rheumatic fever mostly affects children between the ages of 5 and 15. It is uncommon in people over 21.

Symptoms of RA may come and go. When RA symptoms are active, it is known as a flare, which can last days or months. The best way to prevent fevers caused by RA is to manage RA inflammation during a flare.

Doctors often prescribe medications, such as nonsteroidal anti-inflammatory drugs (NSAIDs) and immunosuppressive drugs, including glucocorticoids and TNF-blocking agents, to treat inflammation caused by autoimmune diseases. These medications are also effective against fever and joint pain.

The role that diet plays in RA remains unclear. However, some studies suggest that making changes to the diet can help relieve the symptoms of RA and other autoimmune diseases.

The Arthritis Foundation reports that certain foods can help fight inflammation, strengthen the bones, and boost a person’s immune system. An anti-inflammatory diet is high in fish, vegetables, and olive oil.

Certain foods, such as red meat, gluten, and sugar can make the symptoms of RA worse. Whereas, diets that focus on plant-based foods may help reduce inflammation.

Diets that may help reduce inflammation include:

According to the Centers for Disease Control (CDC), people should seek medical attention for a fever if:

Additionally, people with RA should contact their doctors if they experience any of the following:

Fever is a common symptom of RA. Although many people with RA experience fevers, there is little research into the link between RA and fevers.

Two possible causes of RA fever include inflammation caused by the body’s immune system response and viral or bacterial infections that can occur due to immunosuppressing medication.

Anyone with a temperature higher than 100.4°F should contact the doctor. Staying hydrated and taking over the counter NSAID’s, such as ibuprofen, may help reduce fever.