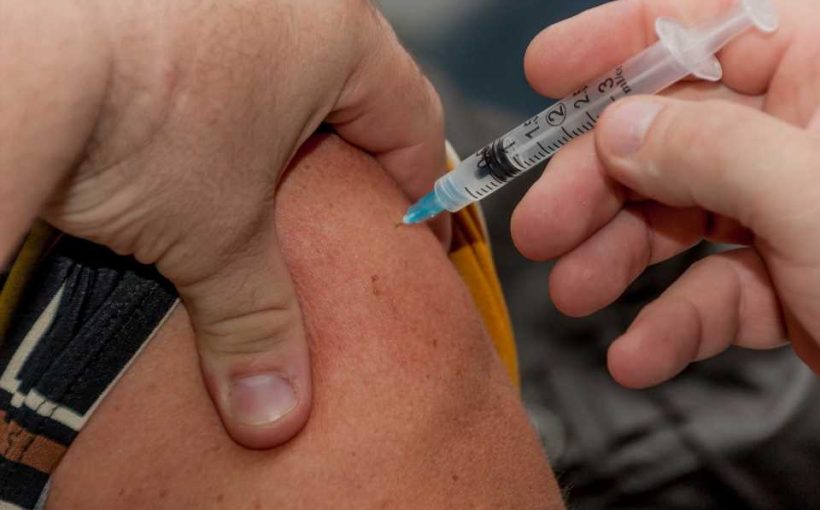 If the United States has even a typical flu season that collides with a COVID-19 flare, the resulting public health nightmare could swamp the nation’s already strained health system.

This year’s flu season could be milder than usual because of social distancing. And more Americans could decide to get a flu shot because of heightened health awareness spurred by the novel coronavirus.

But it’s also possible that fewer people will be willing to go into a public setting to get a shot and that flu season will come roaring in by late October.

“We are more concerned than usual—if that’s possible—that everyone gets a flu shot this year,” said Dr. William Schaffner, professor of preventive medicine and infectious diseases at Vanderbilt University Medical Center.

Every year, millions of Americans catch the flu and miss school and work, hundreds of thousands are hospitalized and tens of thousands die. If that isn’t reason enough for everyone to get a flu shot, Schaffner said, this year there are even more reasons.

Since the mid-1940s, public health officials have tried every year to ensure the entire U.S. population 6 months and older get vaccinated. And every year, only half do.

State and local health agencies want this year to be different.

“We’re doing more than we’ve ever done to reach folks who don’t ordinarily get vaccinated. That includes essential workers, health care workers and Black and Hispanic people. We haven’t been where we needed to be in those communities in the past,” said Claire Hannan, executive director of the Association of Immunization Managers.

This year, every state is launching some type of program to address those longstanding disparities in the distribution of flu shots. “We really have not had the resources to do that before,” Hannan said.

Armed with 9 million free flu shots acquired by the federal Centers for Disease Control and Prevention this year—compared with 500,000 free shots in a typical year—and $140 million in additional flu vaccination funding from Congress, states are taking extraordinary measures to get people inoculated. Here are some examples:

In August, Republican Massachusetts Gov. Charlie Baker mandated all child care attendees and students, ages 6 months to 30 years, be vaccinated as a requirement for entering school or day care. Some parent groups fiercely oppose the first-of-its-kind ruling, but Baker has not backed down.

Washington state is setting up drive-thru flu vaccination clinics to make getting a shot easier and safer for people who may be fearful of potential COVID-19 exposure from going into a doctor’s office or pharmacy.

Rhode Island is using mobile units to bring flu shots to people in medically underserved communities who may not own cars. The state is also working with homeless shelters, needle exchanges, faith-based organizations and community health clinics to host mass vaccination clinics.

Nevada is hiring community health workers to help educate people in underserved Black and Hispanic communities where flu vaccination rates historically have been low. The effort includes a message, in Spanish and English, that getting a flu shot protects not only you, but also your loved ones and your community.

Michigan Democratic Gov. Gretchen Whitmer held a televised news conference in which she received a flu shot and urged all residents to do the same. “It’s more important than ever for Michiganders everywhere to get your flu vaccine,” she wrote in a statement. “Preventing the flu will help us save lives and preserve the health care resources we need to continue fighting COVID-19.”

And in Arizona, the Medicaid agency boosted payments to doctors for providing flu shots and enabled pharmacists to administer the vaccines to enrolled children. In addition, the low-income health agency is offering each enrollee a $10 gift card for getting a flu shot. “The overlap of COVID-19 and flu season presents a perfect storm—and we aren’t taking any chances,” wrote Republican Gov. Doug Ducey.

At the federal level, the Department of Health and Human Services expanded pharmacists’ authority to provide flu shots, allowing them for the first time to vaccinate children ages 3 through 18.

On top of those extraordinary flu efforts, the CDC notified state public health agencies earlier this month that they need to be ready to deliver COVID-19 vaccines as early as Nov. 1—though many medical experts don’t expect a vaccine that soon—and outlined the steps the agencies need to take.

“We were hoping to use flu season as a bit of a warm-up for COVID vaccines,” Hannan said, “but it may end up being a baptism by fire instead.”

Meanwhile, local public health officials nationwide have been transferring flu experts who have been focused full-time on COVID-19 since the beginning of the year to formulate new inoculation campaigns tailored to this year’s dual challenges.

“We all need to be rallying together to focus on flu this fall while we continue to focus on the pandemic,” said Adriane Casalotti, state policy director for the National Association of City and County Health Officials.

“Public health professionals are stretched. People in the community have coronavirus fatigue. Everyone’s tired. We’d all love to have a really light flu season, but we need to be over prepared in case that doesn’t happen,” she said. “What we can’t do is wait until a lot of people are already sick.”

As a result, many people conclude that flu shots don’t work. That, combined with a pervasive myth that a vaccination can make people sick or even cause the flu, have combined to stymie public health agencies for decades. Only about half of the U.S. population gets inoculated in a typical year, according to the CDC, and 3% to 11% of the overall population contracts the illness.

This year, public health experts calculate that more people may be motivated to get a flu shot because of media coverage of the coronavirus. At the same time, some officials say fear of potential COVID-19 contagion could discourage many from going anywhere near a medical setting to get a flu shot.

In addition, with nearly 14 million people out of work, where about a fifth of all flu shots are administered, and with a spike in the uninsured rate, many people may be concerned about how to pay for a flu shot and not know where to go to get a free one, said Dr. Marcus Plescia, medical director at the Association of State and Territorial Health Officials.

Another concern, Plescia said, is that not all medical practices and community health clinics, where more than half of Americans typically get a flu shot, have been able to reopen at full capacity, and many patients are skipping routine physical exams where they would normally be prompted to get their annual flu vaccination.

An August poll commissioned by the National Association of Chain Drug Stores, which represents drug stores that administer nearly one-third of all flu shots, found that more Americans were aware of the need for wearing a mask (86%), washing hands (93%) and staying at home when sick (93%), than were aware of the importance of a flu shot (67%).

Flu infections are below normal for this time of year, according to the CDC. But that could start changing as children go back to school and babies and toddlers enter day care again, picking up the flu virus and spreading it to adults as they typically do in the fall and winter.

Already, thousands of college students returning to in-person learning have tested positive for COVID-19, and some are returning home, where they could spread it to their families and community. The same thing happens with flu.

As temperatures drop and more people are forced to gather inside, where both COVID-19 and flu are more likely to spread, one or both viruses could surge.

The problem is that symptoms for flu and COVID-19 overlap substantially. That means people who become sick with flu-like symptoms—fever, body aches, sore throat and a cough—will need to be tested for COVID-19 as well as the flu, putting pressure on beleaguered laboratories that already are unable to keep up with COVID-19 testing demand.

In addition, Vanderbilt’s Schaffner warns, people who become ill with flu could also get sick with COVID-19.