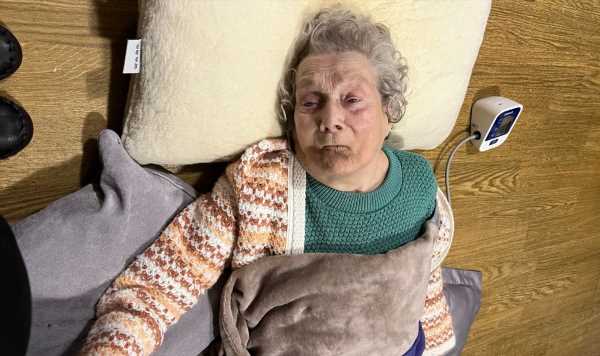 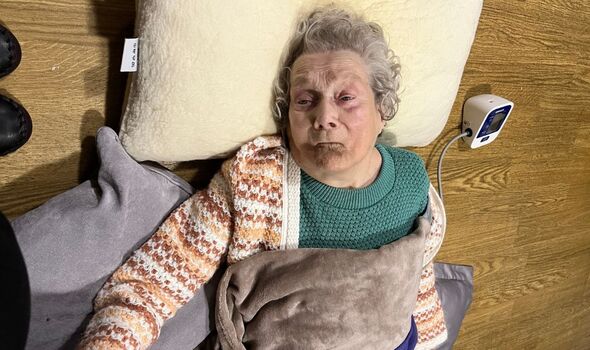 A 93-year-old woman was left “screaming in pain” for 25 hours while waiting for an ambulance after suffering a suspected hip fracture in a fall.

Elizabeth Davies’ family is furious that she was made to lie on the floor, unable to sleep or visit the toilet, for more than a day.

When the pensioner, from Gwynedd, Wales, was finally taken to Ysbyty Gwynedd hospital, she was made to wait another 12 hours before being admitted to a ward.

Yesterday, December 19, Mrs Davies underwent surgery to determine the extent of her injuries after a hip fracture was confirmed.

Her son, Ian Davies, and daughter-in-law, Susan, from Pwllheli, Wales, have been left beside themselves with worry.

Ian told North Wales Live: “It was very upsetting to have to see her lying on the floor screaming in pain for over 24 hours”.

The Welsh Ambulance Service has apologised for what happened.

Elizabeth has been a resident in a care home in Llanbedrog, Llŷn Peninsula, for more than 17 years.

Still relatively fit, she uses a walking frame to get around the care home, which asked not to be named.

But around 11.45am on Saturday, staff heard a bump and found her sprawled in the living room.

Ian said: “They called for an ambulance but were advised an ambulance wouldn’t be available for six to eight hours as they were so busy.

“They said my mother would be a priority because of her age. The care home then called us and we came immediately.”

Staff propped a pillow under Elizabeth’s head and did their best to make her comfortable on the wooden floor.

“They were excellent,” said Ian, who, like Susan, is himself a community carer. “They put a small heater next to her to keep her warm in case she went into shock.”

As Elizabeth was unable to go to the toilet, an absorbent pad was applied so she could urinate.

A mother of three, originally from Mynytho, Gwynedd, she moved to Pentreuchaf after marrying husband Hughie, the local church organist.

Staff began redialing ambulance control staff once it became clear there would be further delays.

It is understood the care home made a total of nine calls; a tenth was made by Ian and Susan.

“My mother-in-law usually goes to bed at 6.30pm-7pm but she couldn’t and she was getting extremely tired.”

Care home staff stayed with her through the night.

Ian said: “Each time they called for an update, they were told my mother was a priority and an ambulance would come as soon as possible.”

An ambulance finally arrived at around 1.15pm on Sunday, 25 hours and 30 minutes after Elizabeth fell.

She was taken to Ysbyty Gwynedd and is now on the hospital’s Enlli ward.

Ian and Susan have yet to discover her prognosis. The incident has left the couple bitterly disappointed.

Ian said: “I don’t blame the ambulance staff because they are told what jobs to do and my mother wasn’t on the list.

“But I was very upset by what happened; it was unacceptable.

“The whole of the NHS is struggling at the moment, and one of the biggest problems is the shortage of carers.

“They aren’t paid enough, and no one wants to do the job.”

Stephen Sheldon, service manager for the Welsh Ambulance Service (WAS) in North Wales, extended his apologies to Mrs Davies for her long wait.

He invited the family to contact the service directly to raise their concerns.

He said: “Winter pressures coupled with a surge in demand, staff sickness levels and the wider system pressures across NHS Wales have inhibited our ability to respond.

“Extensive hospital handover delays are well documented and have led to some very long waits for patients.

“On the 17 and 18 December, we spent over 1,600 hours outside hospitals across Wales, waiting to hand patients over to our hospital colleagues.

“563 of those hours were lost outside hospitals in North Wales.

“We are working with partners across Wales to mitigate the pressures as best we can.

“The public can help us by only calling 999 in a serious or life-threatening emergency so that our resources are available for those who need us most.”

The WAS is urging the public to plan ahead as industrial action hits the service.

Paramedics and other WAS employees are walking out on December 20, 21 and 28.

The walk-out will put additional pressure on the ambulance service, said Mr Sheldon.

Patients should ensure they have the medication they need, and explore “other means of transport” if they need urgent medical care or have to visit hospital.

Health advice and information is also available on the NHS 111 website.