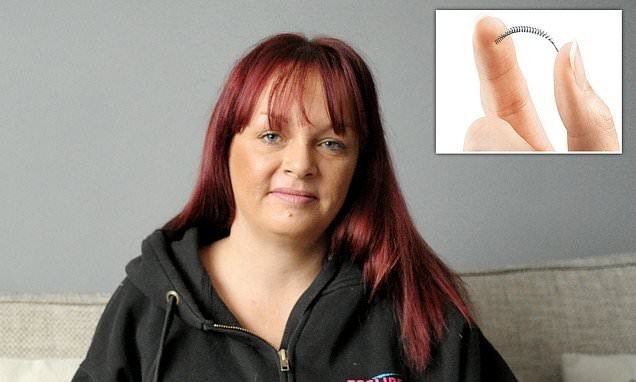 A mother-of-three claims she spent ten days in a psychiatric unit after being struck down by a number of physical and mental health problems that she has blamed on a contraceptive implant.

Charlene Baldwin, 38, says her life was ruined after undergoing a ten-minute procedure eight years ago to insert the Essure implant, which is now banned.

Ms Baldwin, from Rochester, Kent, said she felt ‘destroyed’ by the implant, and, traumatised, refuses to speak of the mental breakdown she experienced.

She can now only walk with crutches, is unable to work and has to allow her nine-year-old daughter to help her get dressed after her health deteriorated following the non-surgical insertion.

The Essure implant, which has driven women to the brink of suicide, has been withdrawn from sale across the world.

The mother is one of thousands of women calling for the manufacturer Bayer to be held accountable for her ‘years of suffering’ and is seeking legal advice. 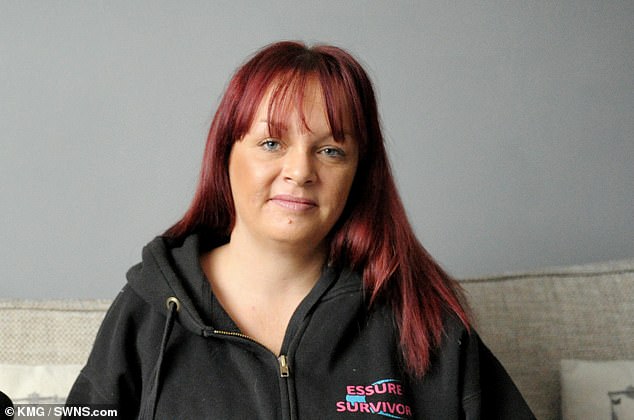 Charlene Baldwin, 38, says her life was ruined when she had the Essure implant eight years ago. She spent ten days in a psychiatric unit due to the distress and pain it caused her 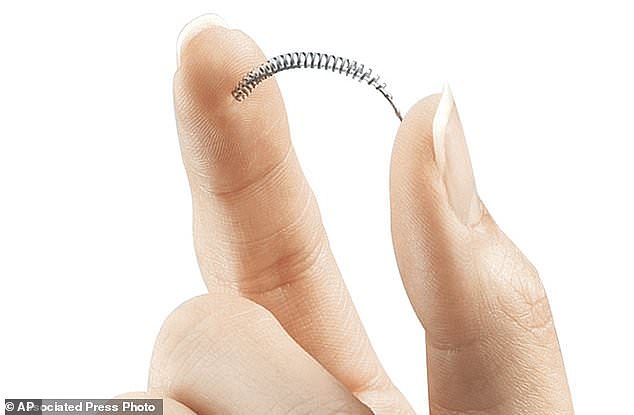 The Essure implant, which has driven women to the brink of suicide, has been withdrawn from sale across the world – apart from in the US. Women suffered problems such as chronic pelvic pain and ectopic pregnancies, which was regarded as a ‘fantastic new product’

Ms Baldwin said: ‘I started losing weight and bleeding heavily, I was in agony. I would be crying one minute, angry the next and just didn’t know what to do with myself.

‘Essure has destroyed me. My nine-year-old has to help get me dressed – no child should have to do that

‘She has never known me to be well because she was only ten months old when I had it done.’

Ms Baldwin claims she has been ‘fobbed off’ during repeat trips to doctors and just given other contraception.

The former volunteer was quick to sign up to the procedure after her gynaecologist told her about the ‘fantastic new product’.

Essure is a permanent birth control procedure that involves inserting a tube into women’s fallopian tubes.

It is non-hormonal and causes the build-up of scar tissue that prevents eggs from reaching the womb.

Accoding to Essure.com, it is 99.3 percent effective when used as a sole method of contraception.

Vaginal bleeding, abdominal discomfort and cramping are expected after the procedure.

In the US, more than 15,000 women have reported complications to the FDA, including pain, allergic reactions and ‘migration of device’.

Allergic reactions are thought to occur due to the device containing nickel and polyester.

This new product was Essure, a flexible coil is inserted into the fallopian tubes via the vagina and cervix.

It was withdrawn by the manufacturer last year after claims some women suffered problems such as chronic pelvic pain and ectopic pregnancies.

More than 34,000 women across the world have complained of side effects in the years since it was marketed.

Ms Baldwin had the implant inserted eight years ago and spoke publicly about how it was so easy she was told to stop laughing half way through.

Then aged 30, Ms Baldwin did not even require anaesthetic and was able to go straight home from Medway Maritime Hospital in Gillingham and prepare dinner for her daughters.

The two tiny coils became surrounded by tissue barriers and her risk of an unplanned pregnancy were eliminated. 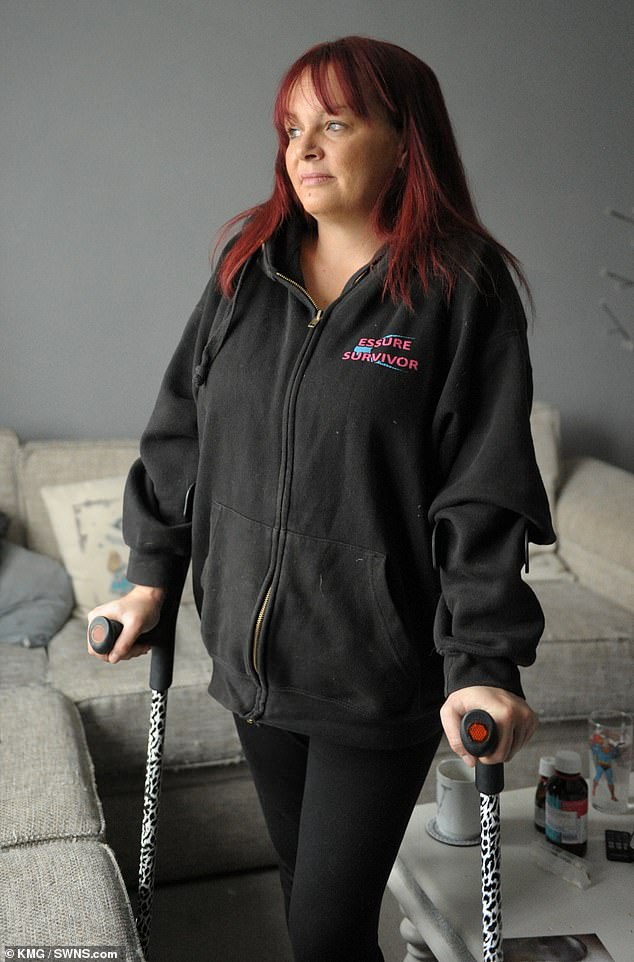 Ms Baldwin, of Rochester, Kent, underwent an emergency hysterectomy five years ago to remove the implant. She was so desperate to have it removed she threatened her GP she would remove it herself with a pen knife. Five years later, her condition has not improved

Ms Baldwin’s nightmarish experience began less than a year later when she started having hot flushes and thought she was going through the menopause.

Ms Baldwin claims to have spent 10 days in a psychiatric unit during her ordeal. However, she has not revealed when this was or where she stayed.

She said: ‘I started to think the problems must be linked to the implant. Then about four years ago I found a forum for women in a similar position.

‘Out of 80 or 90 known side effects I’ve experienced all but ten and the problems were getting worse.’

In some women, the devices have ‘migrated’ or disintegrated, and the nickel titanium metal alloy and polyethelene terephthalate (PET) plastic fibres they are made from, have caused debilitating allergic reactions or cut into tissue, leaving women in excruciating pain or suffering nerve damage. 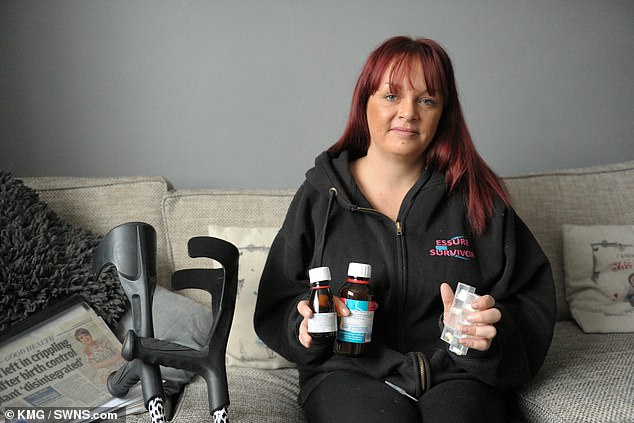 Ms Baldwin, holding the medication she takes, is one of 34,000 women worldwide who have complained of side effects since having the implant

In some cases, the device has been accused of puncturing holes in the fallopian tube, and even becoming dislodged before embedding elsewhere in the body.

Ms Baldwin said: ‘I went back to my gynaecologist and told him if he did not remove it I’d take it out with a pen knife – I was that desperate.’

Five years after her implant was inserted, Ms Baldwin underwent an emergency hysterectomy – the only way to remove it other than taking out the oviduc due to how the coil attaches to the fallopian tubes.

But Ms Baldwin’s condition has not improved.

Of the one million women worldwide estimated to have had the implant, thousands are to have had it removed.

One gynaecologist who has removed 500 described it as becoming like a ‘calcified nail’ after a couple of years and can move around and risk piercing the Fallopian tubes.

Manufacturer Bayer has stopped selling the product in the US, Europe and Australia – citing commercial reasons and negative publicity – but still denies there are any major problems with Essure, which has been shown to be 99.3 per cent effective.

Spokeswoman Hayley Wood said the company supports women and healthcare professionals who have ‘questions or concerns’ about the implant but urged women to first seek the advice of their doctor.

She said: ‘Bayer takes all reports of potential side effects very seriously and keeps the product information for all its products under constant review.’

But Mrs Baldwin said she was never told what caused her health problems and that the medical report after her surgery was ‘vague’.

Medway Maritime Hospital said no formal complaints have been made from the 33 implants that have been carried out by the trust.

Gurjit Mahil, chief operating officer for planned care at Medway NHS Foundation Trust, said: ‘I’m very sorry to hear about Ms Baldwin’s situation and I will ensure that her concerns are investigated if she would like us to do so.

‘Every woman is entitled to safe and appropriate treatment.

‘The Trust no longer offers the Essure implant to patients and has not undertaken any Essure implantation since the use of the device was suspended across Europe in 2017.

‘A number of women in the UK and worldwide have experienced side-effects from the Essure implant in the years since it was approved for use, although it is important to note that many of these symptoms can also be due to unrelated gynaecological or wider health conditions.

‘Although the Trust only implanted a small number of Essure devices before it was withdrawn from use, we are ready to support any women who are or suspect they may be experiencing side-effects from it.

‘Please contact your GP in the first instance, and they will arrange an appointment with us if you need one.’

WHAT IS THE ESSURE DEVICE THAT HAS CAUSED CONTROVERSY AROUND THE WORLD?

Essure is a permanent birth control procedure that involves inserting a tube into a woman’s fallopian tubes.

It is non-hormonal and causes the build-up of scar tissue that prevents sperm from reaching eggs and eggs from implanting into the walls of the uterus.

According to Essure.com, the device is 99.3 percent effective when used as the sole method of contraception.

Women who have had the device fitted claim it has left them in agonising pain, with some even being driven to the brink of suicide.

Essure launched onto the global market in 2002, with more than 34,000 women across the world complaining of side effects in the years since.

In July this year, it was announced that Essure will be discontinued in the US amid reports of thousands of women suffering excruciating pain, bleeding and allergic reactions.

Allergic reactions are thought to occur due to the device containing nickel and polyester.

The US Food and Drug Administration previously placed multiple restrictions on the device following patient reports of adverse events.

Such events included the device ‘migrating’ and even perforating organs.

In May, the FDA said doctors must show women a checklist of the device’s risks before implanting it, which caused demand for the implant to plummet.

Essure was first marketed in the UK in 2009. In August 2017, Bayer instructed hospitals to stop using it.

Although there had been a growing number of complaints against the device, Bayer insisted the product was is withdrawn worldwide for ‘commercial reasons’, with women preferring permanent methods of sterilisation.