Home » Health News » Man, 25, got a glass thermometer stuck in his bladder 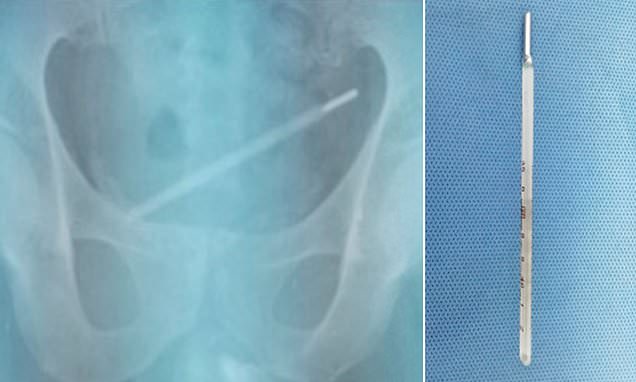 Man, 25, gets a glass thermometer stuck in his bladder after he shoved it into his penis – and he only went to the hospital to get it removed 11 days later ‘because he thought it would fall out on its own’

A man got a glass thermometer stuck in his bladder after shoving it into his penis, a bizarre case report has revealed.

Doctors did not reveal why the unnamed 25-year-old decided to put the object into his urethra, nor did they say how long it was.

However, urologists say many similar cases – involving wires, lightbulbs and straws – are done for sexual pleasure.

The patient, of Shanghai in China, sought help when he noticed blood in his urine, a complaint medically known as haemtuersis. 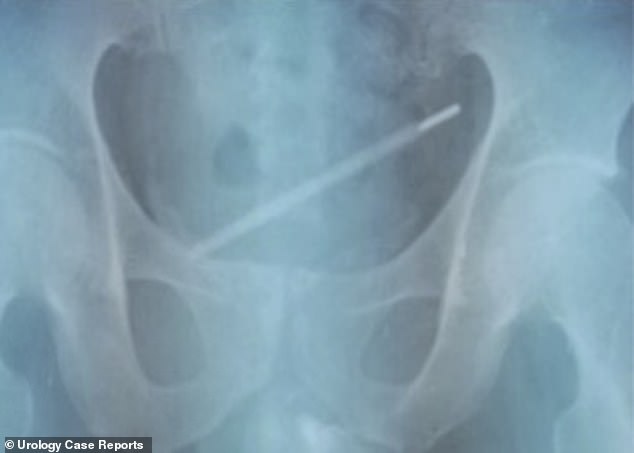 He confessed to doctors at Tongren Hospital about his ‘self-insertion of a thermometer’ into his urethra 11 days before seeking treatment (pictured, the thermometer inside him)

He confessed to doctors at Tongren Hospital about his ‘self-insertion of a thermometer’ into his urethra 11 days before seeking treatment.

Medics wrote in a journal of the report that he said it wasn’t uncomfortable and that he initially tried to dislodge the thermometer himself.

They also said that he expected ‘extraction of the thermometer spontaneously’.

The doctors inserted a thin tube with a camera attached – a cystoscope – into the man’s urethra to look at where the thermometer was lodged.

Forceps were also attached to the tube, which allowed the doctors to twist the object around so the glass end was closest and not the bulb.

The urologists then ‘tugged’ at the thermometer. They ‘fished’ it out in 15 minutes and the patient was allowed home the following day. 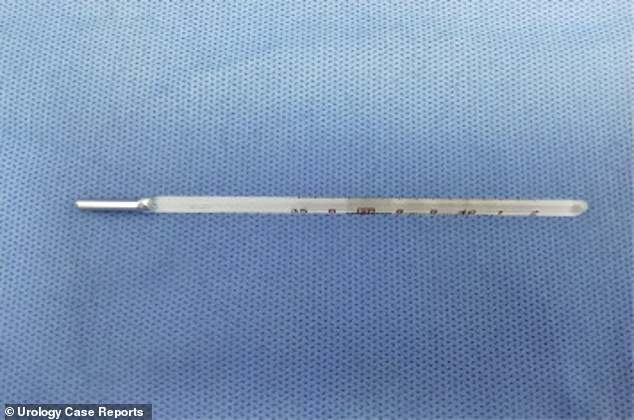 Doctors did not reveal why the unnamed 25-year-old decided to put the object into his urethra, nor did they say how long it was

A man needed part of his penis amputated after he ‘strangulated’ it with a rubber band to try and stop a cancerous tumour from growing, it was reported last month.

The 65-year-old patient went to hospital because of pain in his genitals and doctors discovered he had been trying to treat a skin cancer with a piece of elastic.

By the time they removed the rubber band in surgery it had cut into the skin and damaged the tissue.

Doctors at Koto Hospital in Tokyo called the incident ‘a rare emergency’ and said men more often got things stuck on their penises in pranks or sexual misadventures.

‘Gentle action was taken out to prevent the thermometer from fracture and to prevent bladder wall layer injury,’ the doctors wrote.

The thermometer contained mercury, which, if it leaked, would be harmful to kidney function and the central nervous system.

It is thought the wire reached his bladder because of the contractions whenever he tried to urinate, curling it up and pushing it deeper.

It is not the first time MailOnline has reported on bizarre objects that have been removed from a patient’s bladder.

Doctors last November used a laser to remove electrical wire that had knotted in an 18-year-old’s bladder after he shoved it up his urethra to arouse himself.

The unnamed teenager, from Uttar Pradesh in India, was in pain and struggled to urinate – but did not confess to urologists the reason behind his agony.

Writing in the journal, the medics said more cases of thermometers in the bladder were reported in the 1950s.

They said this was because mercury thermometers were often used to monitor a woman’s body temperature during ovulation.

The team also said that there have been reports in medical literature of patients using their fingers to pull out thermometers.

Dr Richard Viney, a urological surgeon based in Birmingham, told MailOnline it was an ‘interesting case’.

He said: ‘There has long been a fascination in young men for sticking objects down their urethra to enhance orgasm (theoretically).

‘The practice is called sounding. Problems arise when the individual looses control and the object disappears into the patient.

‘The difficulty here is that the thermometer is glass with mercury in it. Two things you don’t want loose inside the body.’

Dr Viney added: ‘Trying to draw the thermometer without breaking the glass is the challenge.

‘They got away with not shattering the glass so there was a ‘happy ending’ for the patient after all.’