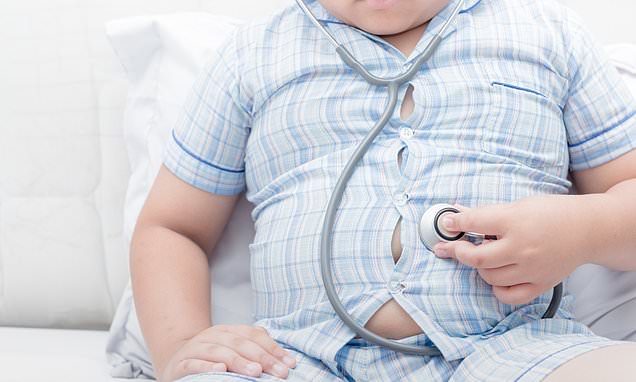 Fat children should be given weight loss surgery because it is safe and can improve their health, scientists say.

Medics are cautious about offering bariatric surgery to overweight youngsters amid fears it could disrupt their growth.

But a Saudi Arabian study today dismissed the concerns, prompting researchers to say the benefits of the procedure were ‘clear’.

Results showed the surgery helped them to keep weight off a decade after the operation, and reverse type 2 diabetes. It also did not stunt their growth in height.

Lead author Dr Aayed Alqahtani, a professor of bariatric surgery from King Saud University, said: ‘If you surgically intervene early, you can cure children’s obesity-related diseases early and improve their quality of life.

‘If you wait longer, their diseases might become irreversible.’

Britain has one of the worst childhood obesity rates in Europe, with around one in ten youngsters falling into the category. In the US two in ten children are obese. 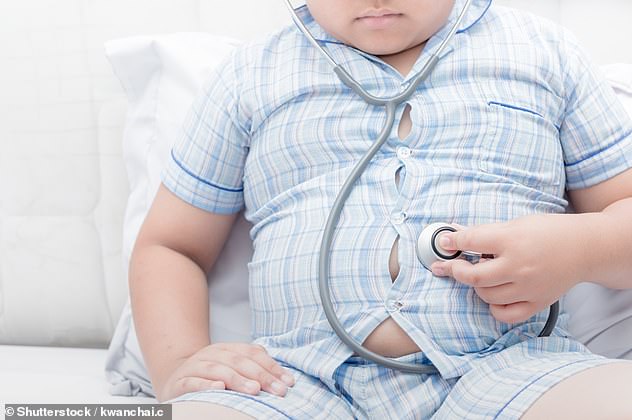 Obese children should be offered bariatric surgery because it is safe and works, according to a study (file image)

NHS doctors already offer weight-loss operations, which can cost up to £15,000, to obese children in rare circumstances.

Normally this surgery is only carried out on patients when their life is deemed to be at risk, and other interventions such as diets have failed.

The most common procedures are gastric bypass, where surgical staples are used to create a small pouch at the top of the stomach.

Others include gastric band surgery, when an elastic band is put around the top of the stomach to restrict the amount of food it can hold.

Obesity is defined as and adult having a BMI of 30 or over.

A healthy person’s BMI – calculated by dividing weight in kg by height in metres, and the answer by the height again – is between 18.5 and 24.9.

Among children, obesity is defined as being in the 95th percentile.

Percentiles compare youngsters to others their same age.

For example, if a three-month-old is in the 40th percentile for weight, that means that 40 per cent of three-month-olds weigh the same or less than that baby.

Obesity can spur on conditions including type 2 diabetes, which can cause kidney disease, blindness and even limb amputations.

Carrying dangerous amounts of weight has also been linked to 12 different cancers.

This includes breast, which affects one in eight women at some point in their lives.

Among children, research suggests that 70 per cent of obese youngsters have high blood pressure or raised cholesterol, which puts them at risk of heart disease.

And if children are overweight, their obesity in adulthood is often more severe.

But Saudi Arabian researchers looked at the effects of a sleeve gastrectomy, which is also offered on the NHS.

In this procedure a section of the stomach is cut out to reduce its size, and it is then stapled together into a ‘banana’ shape.

The area of the stomach that releases the ‘hunger’ hormone ghrelin, which drives appetite, is removed at the same time.

For the study, medics followed 2,500 obese children for up to ten years after they underwent the procedure.

Some participants were as young as five and one in ten already showed signs of type 2 diabetes.

Youngsters who received the operation had struggled to lose weight, despite being given dietary and behavioural counselling for six months.

Participants had lost around 71 per cent of their excess weight a decade after the surgery.

And seven in ten children saw their type 2 diabetes reversed.

Half of children saw their blood pressure drop back to normal levels, reducing their risk of heart disease.

Results also showed that 5 to 14-year-olds — a third of participants — gained height at the same speed as older children who also got the surgery.

Dr Alqahtani said: ‘What we did in this paper… we followed them for ten years and compared their height score.

‘And we found their growth is steady, there is no change.’

But he said that when they started to lose weight this changed the hormone balance in the body and reduced compression on the spine, helping them to grow.

He added: ‘Lack of long-term data and some pediatricians’ fears that bariatric surgery might affect children’s linear growth has led to worldwide resistance to performing weight loss procedures for children below 14 or 15 years of age.

‘Our findings present clear evidence that should remove hesitance to perform bariatric surgical treatment in children and young adolescents who could benefit from the operation.’

NHS England said in 2017 that bariatric surgery should be offered to severely obese children after other non-invasive methods, such as diets, have failed.

Recommendations from the American Academy of Pediatrics published in 2019 say children and teenagers should be eligible for surgery if their body mass index (BMI) is 40 or higher, or if they have a related major health problem.

The study was published in the Journal of the American College of Surgeons.