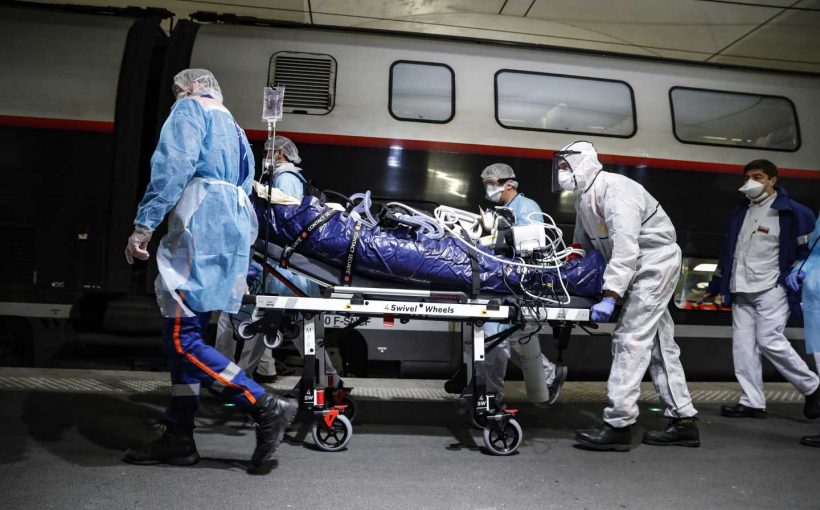 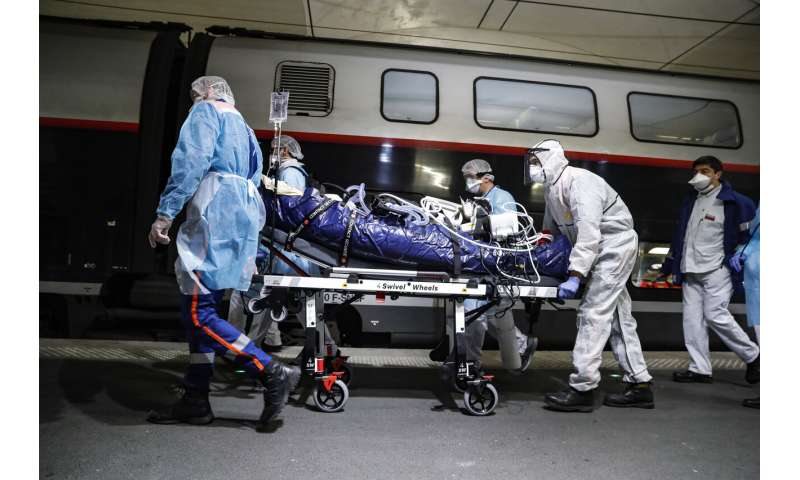 The high-speed train whooshing past historic World War I battle sites and through the chateau-speckled Loire Valley carried a delicate cargo: 20 critically ill COVID-19 patients and the breathing machines helping keep them alive.

The TGV-turned-mobile-intensive-care-unit is just one piece of France’s nationwide mobilization of trains, helicopters, jets and even a warship, deployed to relieve congested hospitals and shuffle hundreds of patients and medical personnel in and out of coronavirus hotspots.

“We are at war,” President Emmanuel Macron tells his compatriots, again and again.

But as the 42-year-old leader casts himself as a warrior and harnesses the might of the armed forces, critics charge that he waited far too long to act against this foe. France, one of the world’s wealthiest countries with one of the best health care systems, they say, should never have found itself so deep in crisis.

Macron had just emerged from weeks of damaging retirement strikes and a year of violent “yellow vest” protests over economic injustice when the pandemic hit. Now he is struggling to keep the house running in one of the world’s hardest-hit countries.

The Rungis food market south of Paris, Europe’s biggest, is transforming into a morgue as France’s death count races past 7,500. Nearly 7,000 patients are in intensive care, pushing French hospitals to their limit and beyond. Doctors are rationing painkillers and re-using masks. 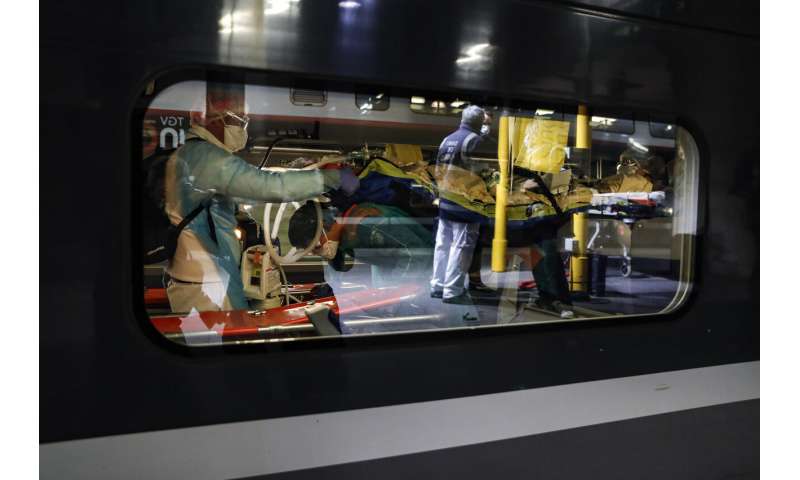 France’s centralized state and powerful presidency make it easier to coordinate the exceptional patient-moving efforts, which have crisscrossed the country and even extended to overseas territories.

But the pandemic has exposed weaknesses in the world-renowned state hospital system after decades of cost cuts. When the president visited a Paris hospital on the front lines of the virus battle, an angry neurologist challenged him to reinvest massively.

“When it was about saving Notre Dame, many were moved,” Dr. Francois Salachas said, a reference to the Paris cathedral that was severely damaged by fire a year ago, prompting immediate, massive pledges of public and private funds for reconstruction. “This time it’s about saving public hospitals, which are going up in smoke at the same speed as Notre Dame almost did.” 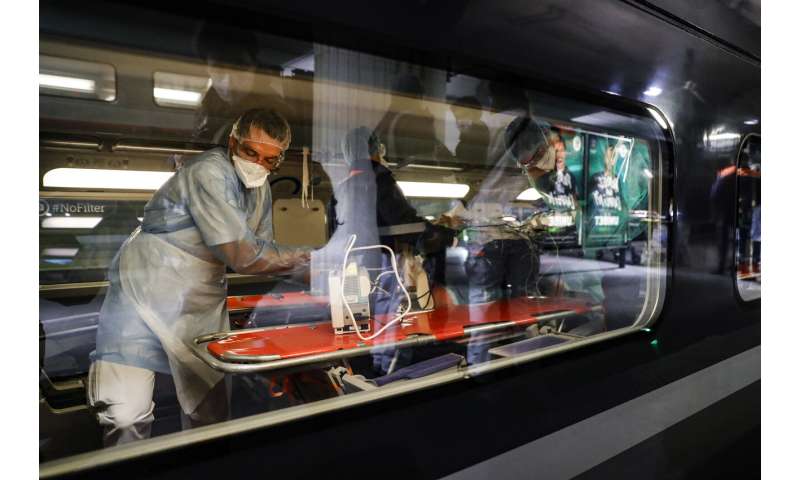 Many think Macron did not anticipate the severity with which the virus could hit and set a bad personal example. Similar criticisms have been leveled at other world leaders including the presidents of Mexico, Brazil and the United States.

In February, Macron made a point of repeatedly kissing Italy’s premier on a visit to Naples to show there was nothing to fear. At the time the virus was already spreading fast across France, but limited testing meant health authorities didn’t yet know.

In early March, he toured a retirement home even as he announced that families should no longer visit elderly relatives. That same day he went with his wife to a Paris theater where the owner tweeted that the president wanted to show that “life goes on.” By then the official virus infection numbers in France were doubling every two days. 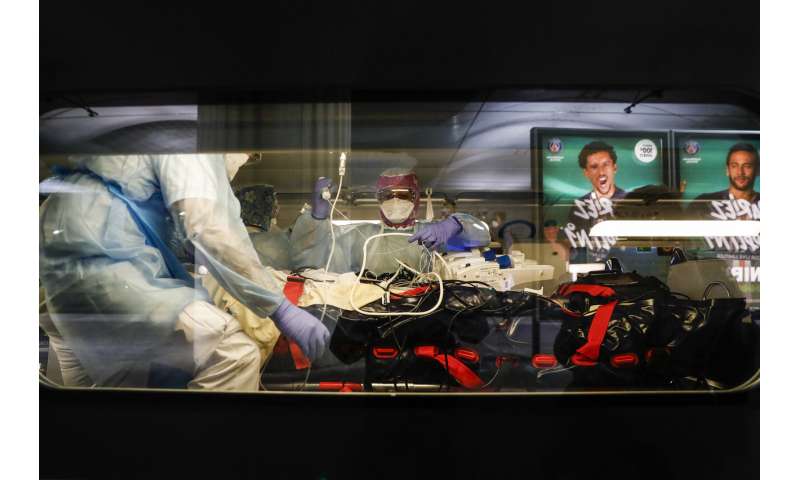 In mid-March, as COVID-19 was ravaging neighboring Italy, France went ahead with the first round of nationwide municipal elections. First lady Brigitte Macron strolled the banks of the Seine, which were crowded with Parisians enjoying a sunny day despite recommendations of social distancing.

It wasn’t until March 16 that Macron abruptly changed his tune, declaring war on the virus and announcing nationwide confinement measures. A week later he appeared wearing a face mask for the first time at a field hospital set up by troops outside Mulhouse, the eastern city that saw an eruption of cases stemming from a five-day evangelical gathering.

The armed forces took on a key role, as military and hospital authorities worked out the system to shuttle patients to less-strained hospitals and medics to virus zones in need. 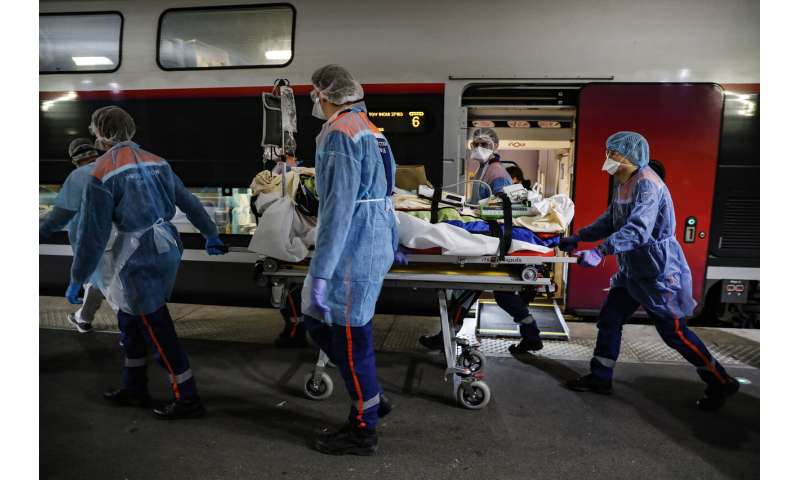 The first “medicalized” TGV made its inaugural trip on March 26. Doctors in protective gear pushed gurneys along the nearly empty platform of the train station in the eastern city of Strasbourg as safety warnings echoed from loudspeakers. Inside the double-decker cars, patients and webs of tubes and wires were squeezed past luggage racks and rows of seats. Once they were secured, the train sped off toward less impacted hospitals in the west.

While the militarized mobilizations are broadly popular, public debate mushroomed over issues such as the relatively low numbers of people being tested for the virus in France and shortages of medical equipment. Macron ordered all face masks requisitioned for medical personnel after it became evident France entered the crisis well short of the necessary supply.

“The question of masks is now the priority question for the French,” said Jean-Daniel Levy of polling agency Harris Interactive, adding that the public feels the government “didn’t take enough responsibility” for it at the outset. 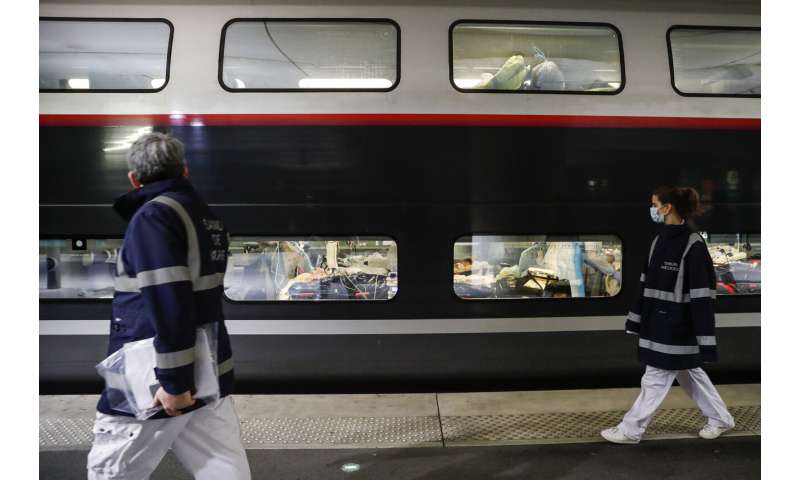 France has had to send some patients for treatment to neighboring Germany, which has conducted massive nationwide testing and confirmed more cases than France while recording a death toll about one-fifth as high so far.

Macron, a centrist, has taken fire from both ends of the political spectrum.

Far-right leader Marine Le Pen told France 2 television that “the government lied about the preparedness of the country,” while far-left leader Jean-Luc Melenchon said Macron, a former investment banker, “used to think that the free market would meet the country’s needs, so his mental framework collapsed.”

Among the broader public, Macron “is seen as relatively authoritarian,” Levy said. That hurt him during the protest movements but helps his popularity now because “we want to have a strong authority figure” to manage the crisis. 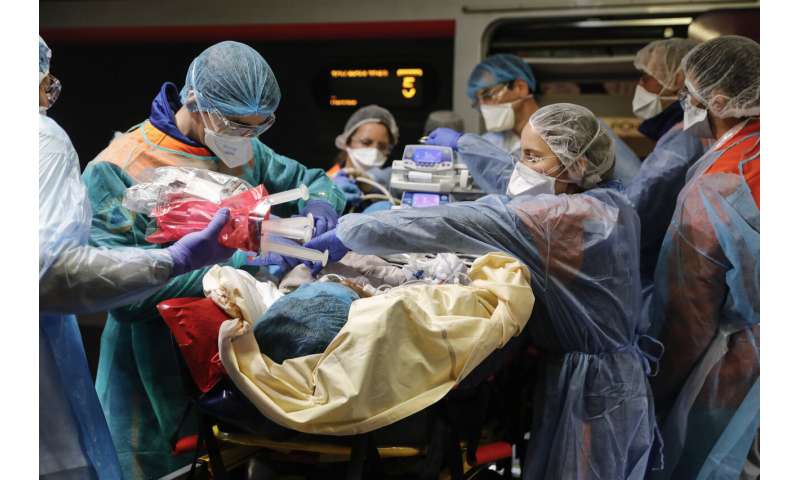 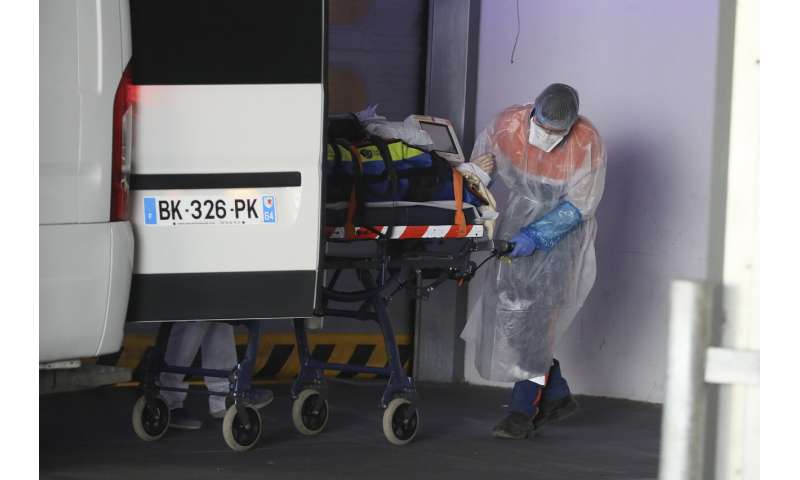 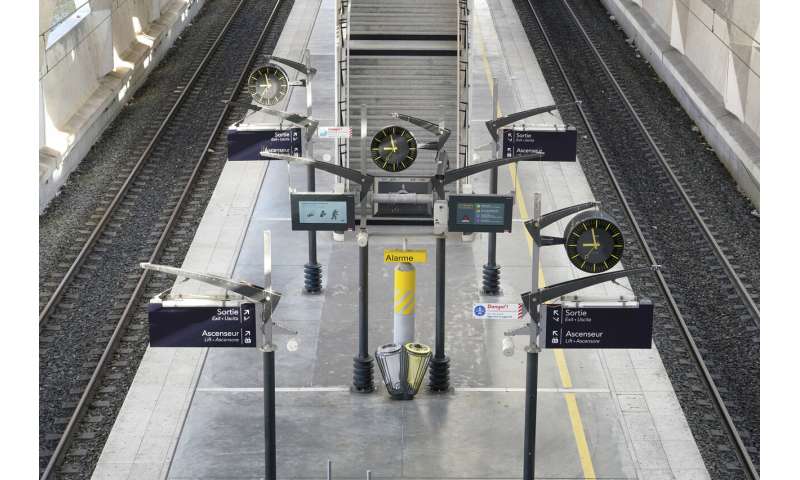 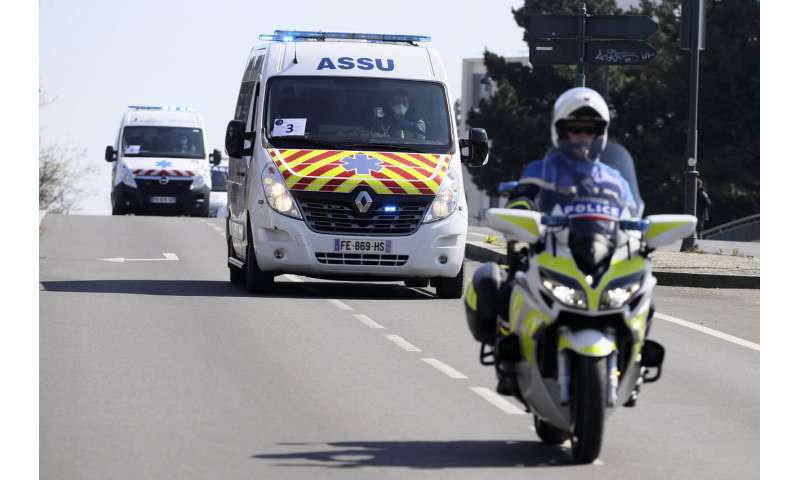 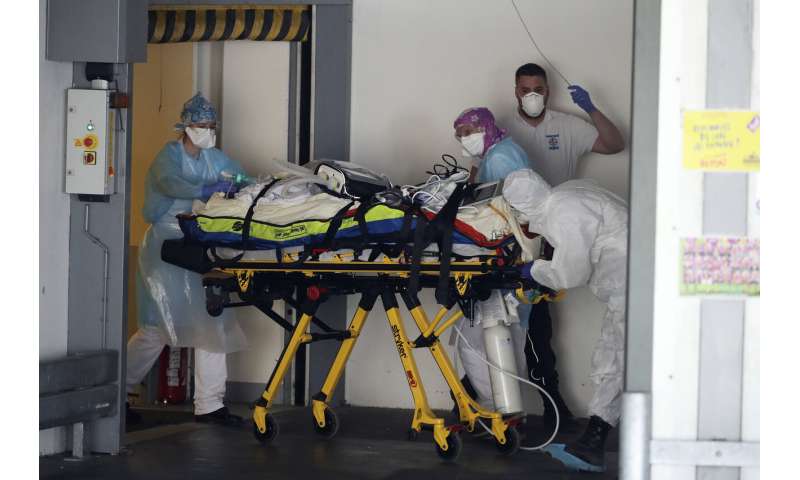 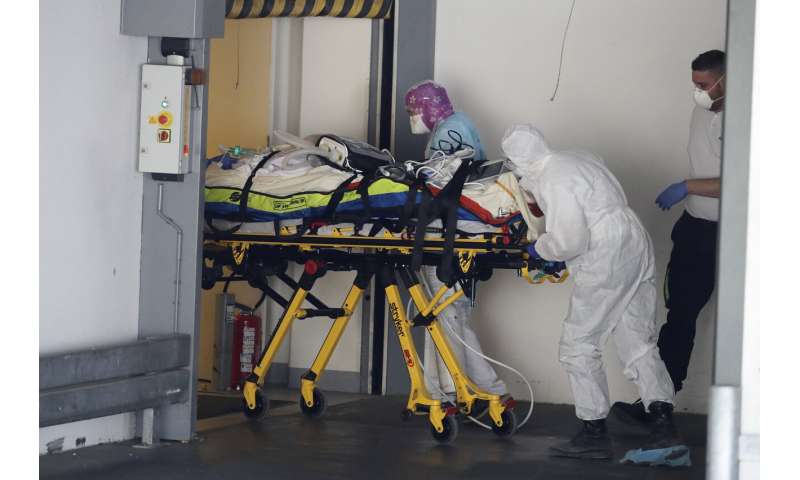 In the National Assembly, the lower house of parliament, a fact-finding mission is scrutinizing the government’s handling of the emergency.

Macron, however, said while visiting a mask manufacturing company that it’s not yet time to focus on what went wrong.