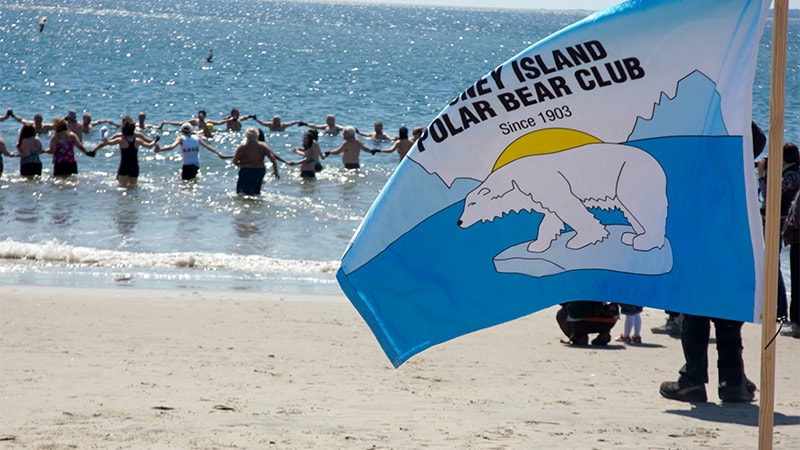 Every Sunday from November to April Dennis Thomas starts his day by hitting the beach at Coney Island for a dip in the frigid Atlantic Ocean — no matter how low the mercury plummets.

Thomas, president of the Coney Island Polar Bear Club, says these winter swims offer more than just a bracing rush of adrenaline. He believes they’re the reason that, at age 67, he is fiddle-fit physically, tack-sharp mentally, and rarely catches so much as a winter cold.

“I’ve been doing this for 35 years,” says Thomas, a brand manager for a software company who bikes 5 miles a day. “Physically, I will say I get less winter colds than I used to. Mentally, it clears my head. It’s kind of a purge and a cleansing of the mind because you can’t think of anything that’s troubling you when you’re in water that cold.”

New research out of Norway appears to confirm what Thomas and his fellow Polar Bears have long believed to be true.

A systematic review of 104 studies, by researchers from UiT The Arctic University of Norway and from the University Hospital of North Norway, found strong evidence that cold-water swims and therapies based on them offer significant physical and mental health benefits.

Taking a dip in icy-cold water cuts “bad” body fat in men, according to the analysis published in the peer-reviewed International Journal of Circumpolar Health. It also boosts the development of “good” fat that helps burn calories and combats obesity, cardiovascular disease and diabetes, the authors concluded.

“It’s very rarely that you’ll meet a cold-water swimmer who thinks it’s a negative activity. They all swear by it,” Mercer says.

Over the years there has been evidence that cold-water swimming can boost  your health, Mercer says. Among those benefits: Everything from increased libido to improved heart health, mental health, and more.

Mercer says more research will help solidify the connection, “but we have to start somewhere, and what we’re seeing right now, I think without doubt, is that in some areas … indeed, there may be some potential positive effects.”

Not a New Trend

Cold-water swims and therapies have been practiced for centuries in many countries with colder winter climates.

Ice swimmers typically take the plunge into waters that are under 50° F and may even be near or just below freezing temperatures, Mercer’s team reports.

Many people who engage in these activities say they believe the practice has helped them lose weight, have better mental health (and less depression), improve their immune system function, boost their circulation, and even increase their libido, among other benefits.

The researchers note the participants in the 104 studies varied widely. They ranged from elite swimmers and regular winter bathers to those with no previous winter swimming experience. Others were not strictly ice bathers but used cold-water immersion as a treatment after exercise.

They added that other factors — beyond simply cold-water exposure — may play a role in the health benefits the studies observed. For instance, cold-water swimmers may be “naturally healthier” as a group and tend to live active lifestyles. They experience positive social interactions from such activities, have learned how to handle stress (often through meditation, breathing techniques and mindfulness practices), eat healthy foods and demonstrate “a positive mindset,” the authors report.

Tips to Get Started

If you’d like to give cold-water immersion a shot,  you don’t need to jump in an icy lake, pond or the ocean during the winter. Amanda Alexander, ND, a naturopathic doctor with Sonoran University of Health Sciences in Tempe, AZ, and other experts recommend the following ways:

If you do decide to give cold-water immersion a shot, Alexander, Mercer and other experts recommend talking to your doctor first if you have a heart condition or other health concerns.

It’s also a good idea for beginners to ease into the practice, keep your initial experiences to just a few minutes and gradually increase your time in the water as your cold tolerance increases. In addition, be sure to warm up after any cold-water immersion to eliminate the risk for hypothermia.

“Before anyone should get involved in this they have to be aware of the negative effects and the dangers, if you’re not used to this kind of activity,” Mercer says. “What I’m afraid [of] is people will think they should go and jump into icy-cold water without being used to it, perhaps not realizing they might have some underlying health problem.”

Even so, Mercer says he would not hesitate to recommend cold-water swimming, based on his own research.

“But with a proviso: If you do it, at least when you’re starting out, don’t go into the coldest water and perhaps do it with other people who know what they’re doing … because there are some risks and people could die. Ice swimming is quite high stress on the body. But all in all, we do have some clear indications that there are indeed benefits.”

Lessons From a Polar Bear

Thomas, the Coney Island Polar Bear Club president, acknowledges that cold-water swimming isn’t for everyone and that it’s important for beginners and anyone with a pre-existing health condition to be careful.

But he’s known only a few individuals who have had negative experiences or health problems during the club’s regular Sunday winter swims.

“We do encourage someone who’s new to this [or] has any concerns to consult with their physician first,” he says. “But in all these years, I’ve seen only a couple cases where people had a reaction, mild hypothermia, and I haven’t seen any heart attacks.”

Thomas took his first winter plunge in the 1980s after watching a group of Polar Bear swimmers jump into the ocean one wintry Sunday morning. Like many of the club’s 130 members, he did it on a lark, thinking it would be a one-and-done experience only. But he enjoyed it so much he decided to keep coming back, Sunday after Sunday.

So how does he stand the cold temperatures of the water?

“People ask me that all the time — is it mind control that allows you to think it’s not that cold?” he says with a laugh. “And the answer is no, it’s cold every time. But it’s fair to say I know what to expect, and [now] I do it for fun, to be honest.”

Thomas adds that Mercer’s study findings are heartening in that they support what Polar Bear members have long suspected to be true.

“We’ve heard a lot of anecdotal evidence through the years, small research studies and such,” he says. “Anyone who does this truly believes it brings them some sort of benefits in it, whether it’s physical, mental, spiritual … or something like that. So I’m not surprised that science is starting to back that up.”