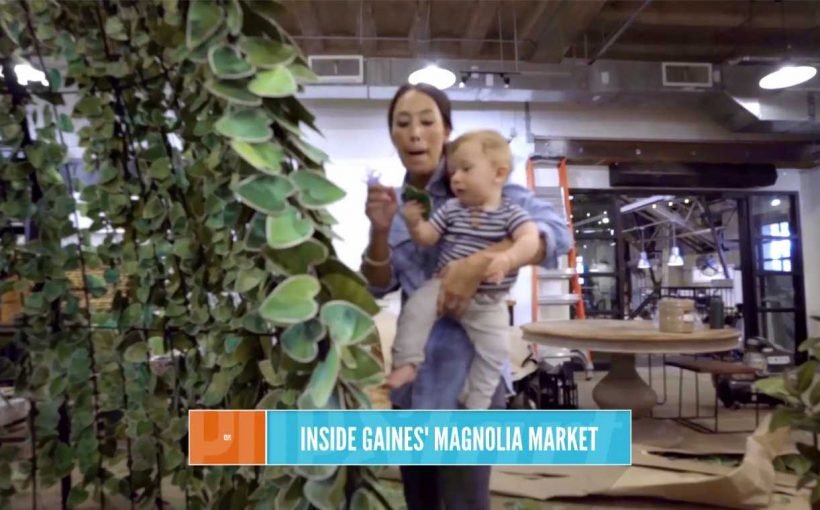 Crew is taking a leaf out of his mom’s book — almost literally.

Joanna Gaines‘ 10-month-old son recently accompanied his mom to her and husband Chip Gaines‘ Magnolia Market in Waco, Texas, where they admired the handiwork on a teepee covered in “unique” watercolor-painted leaves.

“Do you see these? Look,” Joanna, 41, tells Crew in a video shared by the Today show, bringing him close to the details of the impressive display.

“Be gentle, gentle — ” she adds, but it’s too late, as her baby boy makes quick work of ripping one of the faux-flora pieces right off its base.

After a shocked expression crosses her face, the Fixer Upper alum looks around to makes sure no one saw the snafu, then gently tells Crew, “No no no, we can’t take any more down. They worked real hard on that.”

Joanna has previously opened up about taking her youngest child to work with her on a regular basis. In November, the mother of five shared too-cute videos on her Instagram Story of Crew playing during her work meeting.

Months later, in February, Joanna posted a trio of clips chronicling a meeting at which her baby boy was the center of attention.

Sitting on a table between two adults, Crew was dressed in a gray hooded outfit with large buttons down the front, sucking on a pacifier and clapping his hands in one video Joanna captioned, ” ‘Yes! I love that idea!’ — Crew, CEO.”

In the subsequent two sets of footage, Crew looks increasingly less interested in the goings-on around him, which his mama narrated, ” ‘Ok let’s wrap this meeting up, I’ve got places to be.’ — Crew.”

In March, Crew was the only lucky audience member during an “unannounced” reading of her first children’s book, We Are the Gardeners, which the Magnolia mogul chronicled on her Instagram account to celebrate its release.

At the beginning of the clip, the baby boy raised his arms in the air and clapped as his mom read out loud, but he was soon more interested in something that was distracting him off camera.

“Hey, Crew! Right here! Pay attention!” Joanna sweetly told her son, bringing his focus back to the story during their session at a Barnes & Noble in Palm Desert, California.

She captioned the cute video, “When you’re out of town for work on the day of book launch, so you host an unannounced book reading … and only one kid shows up. #thanksCrew #WeAreTheGardeners“