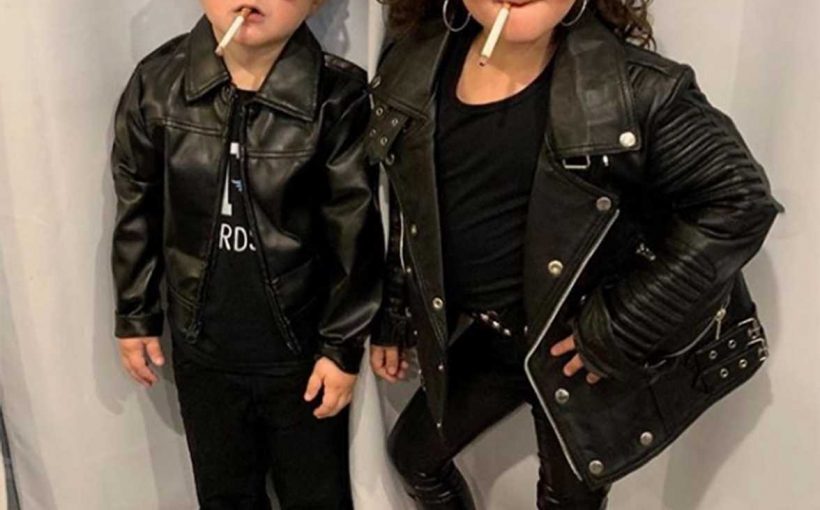 Roger Mathews isn’t apologizing for his kids’ Halloween costumes — including one controversial accessory.

While the siblings looked adorable channeling the 1978 film’s lovelorn, leather-clad protagonists made famous by John Travolta and Olivia Newton-John, many of the comments on Mathews’ post criticized the faux cigarettes pursed between the kids’ lips.

“Much respect my friend but you could have done this without the cigarettes bro. As a smoker I don’t [think] it was a good idea,” one fan addressed Mathews, 44.

“Omg😒 cigarettes!!!” another wrote. “Aren’t u suppose to keep them away from cancer??”

Other fans jumped to the father of two’s defense, like one who said, “Do you people really believe this father would give his children real cigarettes? Like what has social media done to humanity? Relax people. Life is not this serious!”

Another wrote, “It’s funny people try mad about the cigarettes but then let their kids have fake guns or axes pretending to kill people on Halloween.”

Mathews made it clear that any criticism was unwelcome in the caption of his post, writing, “Please comment on the fake cigarettes so I can block you. Please.”

“They nailed the role and if you don’t get it you most certainly would never get us. #Peace,” he added.

Mathews — whose divorce from Jersey Shore: Family Vacation star Farley, 34, was finalized in August after splitting almost a year before — previously shared photos and video clips of his kids in princess and Spider-Man costumes for their first round of Halloween dress-up fun.

“Got an invite to the kids old school for some trick or treating,” he captioned an Oct. 18 gallery that showed Greyson and Meilani attending a kid-friendly Halloween event. “Didn’t want to put their new costumes on so that they’re fresh for actual trick or treating night. We did some last-minute improvising.”

The following day, Mathews posted snapshots and video footage of his kids attending an outdoor festival, where they rode ponies, carved pumpkins, bonded with bunnies and goats, got their faces painted and more.

“The Mathews Clan went hard today. Rain tomorrow. We had to get all of our outdoor activities in today. #Blessed,” he captioned the post.