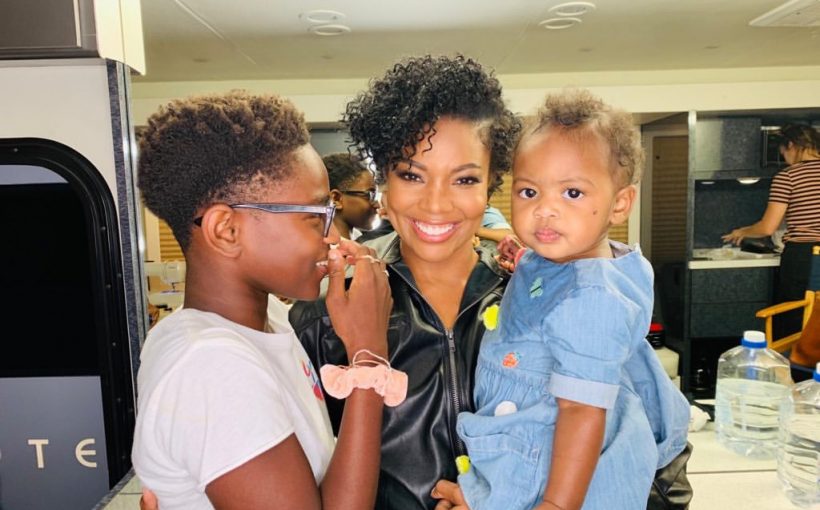 Gabrielle Union — and her daughter — have no time or patience for negative comments about their family.

“My girls,” the former NBA star, 37, captioned the Instagram Story image of Union, their daughter (who throws a fierce look at the camera) and his second-youngest, who sports a stylish pink scrunchie around their wrist.

“What y’all think about this?” the Twitter user asked, to which Union responded in her retweet of the sweet photo, “Looks like love to me 🤷🏾‍♀️ I truly hope that everyone gets the love, support and hugs they deserve.”

The Bring It On star stepped out in April alongside Zion at the 11th annual Miami Beach Pride parade, where the duo rocked colorful attire while posing for various snapshots.

In photos shared to Wade’s Instagram Story, Zion flashed a huge smile alongside Union, 17-year-old big brother Zaire Blessing Dwyane, little sister Kaavia and numerous other loved ones as they celebrated at the event together.

The preteen looked too cute holding up a rainbow flag and heart in one snapshot with Zaire that Wade wrote “It’s a family thing” over, sporting a matching pin, a yellow tank top and sneakers and green shorts.

“Love you lil bro no matter what,” Zaire captioned the same brotherly love photograph on his own Instagram Story, writing on top of a similar one, “Gotcha back kid / Support gang!”

“Zion had his [own] cheering section today,” proud papa Wade — who was absent from the gathering, due to being in Toronto for a Miami Heat game against the Raptors — wrote alongside a group photograph. “Wish I was there to see you smile kid!”

In a June interview, Wade told Variety when asked about his family’s attendance at the parade, “I don’t really talk about it much because it’s Zion’s story to tell.”

“I think as a family, we should support each other. That’s our job,” the athlete added. “And my job as a father is to facilitate their lives and to support them and be behind them in whatever they want to do.”

“I’m very uneasy about accolades that come from supporting my kids or the negativity that comes from it,” Wade continued. “I’m doing what every parent has to do.”