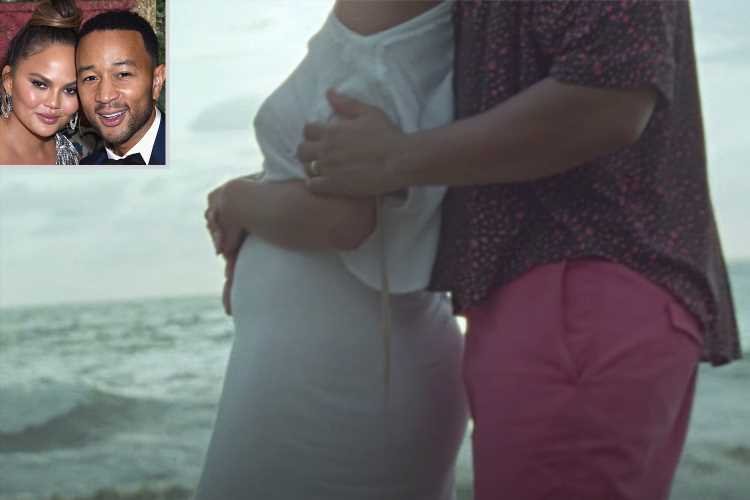 The 41-year-old musician and soon-to-be father of three talked about the filming of "Wild" in Mexico with PEOPLE senior editor Janine Rubenstein during the latest conversation in Meredith's :BLACKPRINT series on Thursday, explaining the pregnancy reveal was a last-minute decision by Teigen, 34.

"She was kind of hedging her bets, because we were early in our pregnancy," he tells PEOPLE. "We hadn't taken all the tests to make sure everything is okay, and she said, 'Let's just shoot it.' And by the time the video would be edited, we could decide whether or not to use that scene."

"Then all the tests came back great and everything was healthy and good, so we knew it wouldn't be too early to tell people that we were pregnant by that point," he adds. "So by the time the edit was done, we were comfortable saying to the world that we were pregnant." Thanks to @johnlegend and @janinerube for such a BEAUTIFUL conversation today with :BLACKPRINT AND @meredithcorporation! Missed it? No worries, we’ll give you the low down on the main takeaway. “VOTE!!!” And go stream John’s album “Bigger Love” now.

The musician says the baby news came as a complete surprise to them, and admits they "weren't actively trying — other than the actual act of doing what one does to procreate, we weren't trying to have a baby at that time."

"We just were in quarantine, and spending a lot more time together," he says of the family's lockdown amid the ongoing coronavirus (COVID-19) pandemic. "And here we are."

Legend and Teigen have been open about their past fertility struggles, and how they previously underwent in vitro fertilization to conceive their two children: son Miles Theodore, 2, and daughter Luna Simone, 4.

"We just didn't think we could have a baby the old-fashioned way, honestly," Legend admits with a laugh. "I believed that there would be a quarantine baby boom, with all these couples spending more time together. And I would joke about it, but I figured it wouldn't happen to us because we've had fertility struggles. And now it happened to us, too." The couple shot the video while on a family vacation in Mexico, adding on two extra days for filming. And considering it's the first music video he has shot since the pandemic began, Legend feels it couldn't have gone more smoothly.

"They let us all fly down there. Chrissy and I, and the family, flew private, but a lot of crew members were able to fly commercial," he explains. "From L.A., there's direct flights, and if you mask up, the planes weren't too full. They do a temperature check and all those things, they let you in the country and they let us do our thing."

"It was just the family in the video, so we were able to socially distance from everyone else," says Legend, who believes the smaller crew made things far less stressful.

"We got tested when we got back home, made sure everybody was healthy, and we were all good," he adds. "I guess it's easier to shoot these things when it's only your family members in the cast of the video."

"We made it work, and it came out beautifully," he notes.

In a funny turn of events, the "Wild" video was directed by Nabil Elderkin, the same filmmaker who introduced the pair 14 years ago on the set of Legend's music video for "Stereo."

"I wouldn't have met Chrissy without him," a grateful Legend raves.

"He also shot the 'All of Me' video when we got married back in 2013 at Lake Como, and the 'Love Me Now' video when [Chrissy] had just given birth to Luna, which was her first video," he adds. "So this was another milestone that he was a part of. It's a pretty cool, full-circle moment."

We don’t have many pics together for some reason. We only take pictures of our monsters!

Chrissy Teigen Was "Shocked" by Pregnancy, Says Source: "It Really Was the Happiest News"

As for how the family is adjusting to a full house that now also includes a third child on the way? "I feel good, my family is well," says the EGOT winner.

A source previously told PEOPLE that "Luna is particularly excited for another sibling," adding, "She wasn't quite old enough when Miles came along but this time she understands there's a new baby coming. It's very cute."

The couple's son, however, is a little less enthused. "Luna is very, very excited," Teigen tweeted on Aug. 15. "Miles, not so much. Jealous!"

Legend, meanwhile, is just trying to balance it all as a husband and father. "Chrissy's in the midst of pregnancy, and [I'm] just trying to take care of her as much as possible," he tells PEOPLE. "And be a good daddy, and work a little bit here and there."