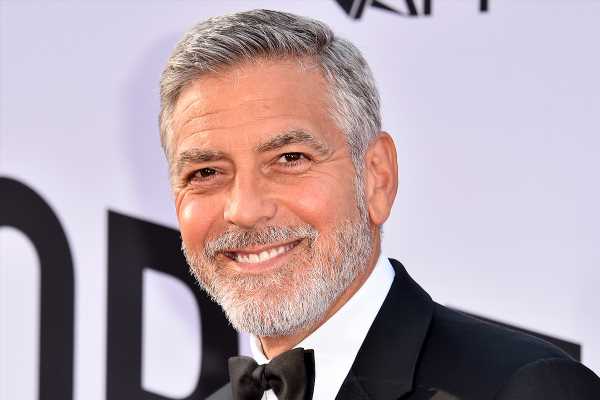 Add George Clooney to the list of parents whose children have Zoom-bombed a work call this year.

The actor, who graces GQ's cover as the magazine's 2020 Icon of the Year, was interrupted mid-interview by 3-year-old son Alexander, and the adorable exchange was included in the published profile.

Clooney, 59, told the magazine that he did not intend to remarry until he met his wife Amal Clooney.

"I'm gonna work, I've got great friends, my life is full, I'm doing well," Clooney said of his life before meeting the human rights activist and lawyer. "And I didn't know how un-full it was until I met Amal. And then everything changed. And I was like, 'Oh, actually, this has been a huge empty space.' "

The Oscar winner said that he'd "never been in the position where someone else's life was infinitely more important to me than my own. You know? And then tack on two more individuals, who are small and have to be fed.…" "Oh, hey! Here's Alexander. Here's my son. Come here! Say hi! Say hello! Say 'Hi, Zach!' " Clooney said, shifting his attention to Alexander. "You've got chocolate on your face. Do you know that? What is that? Did you have chocolate?"

The toddler goes on to answer, "Three. Because I got my birthday."

The actor then asked Alexander to say something in Italian, which the toddler speaks fluently.

"Molto caldo," Alexander said, which means that it's "very hot."

Clooney spoke about his family several times throughout the interview — and revealed that his twins (Alexander and his sister Ella) were at the forefront of his mind during his motorcycle accident in 2018.

While in Italy shooting the Hulu series Catch-22 that summer, Clooney crashed his motorcycle on the way to set and was "launched" into the air, the actor recalled to GQ.

"I launched. I go head over heels. But I landed on my hands and knees. If you did it 100 times, maybe once you land on your hands and knees, and any other version you land, you're toast. It knocked me out of my shoes," he said. "When I hit the ground, my mouth — I thought all my teeth were broken out. But it was glass from the windshield."

Clooney — who said he thought he had been paralyzed — noted that Alexander and Ella were about 1 at the time and added that he  "thought that this was it and that I wasn't gonna see them again."

Thankfully, that wasn't the case — though the scary incident did cause Clooney to swear off riding motorcycles from then on.

"I was very lucky to pull out of that one. That officially got me off motorbikes after 40 years, which is unfortunate," he told ITV’s This Morning in June 2019.

“It was one of those conversations, we were coming back from the hospital and she said, 'That’s it,' ” Clooney said of his wife's reaction. "And I was sort of kind of thinking, ‘Well, maybe I can still get away with this,’ and then my buddy, who was also in the accident with me, Grant [Heslov], who is the other producer, said, 'Yeah, I’m off.' "

"There was nothing I could do," Clooney added of the decision to give up motorcycling, "I was ganged up on."