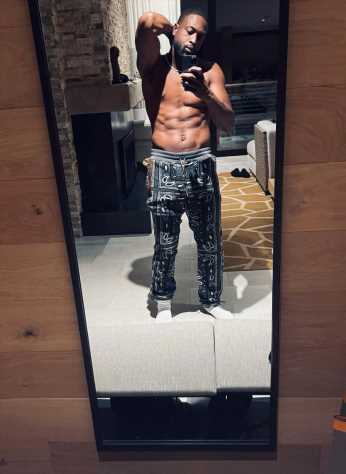 Dwyane Wade's teenage son is not a fan of his dad's shirtless photos.

Less than a month after the former NBA player celebrated his 39th birthday by posting a photo of himself in his birthday suit, Wade shared another steamy snap this weekend, much to the dismay of his son Zaire.

"Pre-Valentine Behavior," the athlete captioned a trio of shirtless images in which he struck a pose while showing off his abs.

Although his wife Gabrielle Union let her appreciation be known and left a string of cheeky emojis in the comment section, Wade's 19-year-old son had a very different response.

"Here we go again," he wrote, adding an unimpressed emoji. Last month, Zaire left a similar comment on his father's revealing photo, jokingly writing, "This isn't what I wanted to wake up to."

While celebrating Valentine's Day together, Union also shared some steamy snaps of her own, which showed the couple taking a bath together. "Happy Valentine's Day 🖤🖤," she wrote alongside the images.