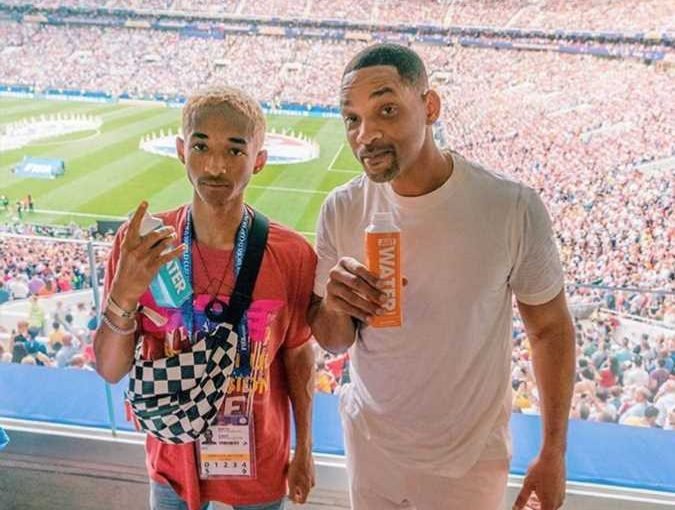 The son of Will and Jada Pinkett Smith was inspired to create a renewable alternative to the plastic water bottle after learning just how much trash is being dumped into the ocean. “We weren’t using our waste in the right ways or being responsible,” Smith told PEOPLE in 2016.

Devastated by his research, Smith, now 20, decided to take matters into his own hands. In 2015, the rapper created JUST water, ethically sourced 100 percent pure spring water that comes in a paper-based bottle with a cap that’s made from sugarcane. He’s expanded his charitable work into a foundation called JUST goods and has partnered with First Trinity Missionary Baptist Church to deploy a mobile water filtration system called The Water Box, to help spread clean water to the residents of Flint, Michigan, according to Essence.

Smith’s father and Queen Latifah are investors in JUST, but don’t think Smith is relying heavily on his celebrity status to promote his product. “We wanted to organically grow as a company without saying ‘Smith family water’ because it’s really not that,” Smith added. “It’s water for the people.”

The top model and daughter of former Real Housewives of Beverly Hills star Yolanda Hadid and real estate developer Mohamed Hadid has been a huge supporter of UNICEF, a charity that helps support underprivileged children around the world through fundraising, advocacy and education.

In 2018, Hadid took a trip to Bangladesh with the organization one year after the Rohingya refugee crisis, which began in August 2017. The 23-year-old played educational games and activities with students and met with women and community mobilizers to learn more about how the communities have been since the mass influx of Rohingya refugees to Bangladesh from Myanmar took place.

After the trip, Hadid asked her 47.2 million Instagram followers to donate $25 to UNICEF, which would provide nine families with mosquito nets to protect against malaria, or $30, which could buy 1,000 pencils for an entire school. She also partnered with UNICEF Ambassador and model Halima Aden to start a CrowdRise page to support children from around the world who have been uprooted from their homes.

The daughter of the late Crocodile Hunter Steve Irwin has dedicated herself to carrying on her father’s legacy of fighting to protect wildlife on a global scale. Irwin, 20, along with her mother Terri and younger brother Robert, 15, has continued to expand the family zoo in Australia and travel the world to spread the message of the conservation nonprofit Wildlife Warriors. You can follow along Irwin’s journey through her Instagram, where she keeps her followers up to date with her latest advocacy efforts.

In 2015, the 26-year-old singer created The Happy Hippie Foundation, a nonprofit with a mission to fight injustices facing homeless and LGBTQ youth. The daughter of musician Billy Ray Cyrus was inspired to act after the passing of transgender teen Leelah Alcorn, whose death was a big wake-up call for those who were unaware or unfamiliar with the hardships transgender youth experience daily. Cyrus’ foundation is privately funded so 100 percent of all donations directly benefit those in need. But her philanthropic work doesn’t stop there.

In 2018, The Voice season 13 contestant Janice Freeman, who was a member of Cyrus’ team, went on Instagram Live to reveal that she had hit a financial rough patch and Cyrus had stepped in to pay a security deposit and the first six months rent on a two-bedroom apartment for her and her family. The charitable act brought Freeman to tears as she explained how “overwhelmed” she felt about the generous gesture.

“Miley, you are my dawg, like, my best friend, and I will defend you to the bitter end,” Freeman said during her emotional Instagram Live. “This woman blessed me to be able to move in. Do you understand?”

After the devastating June 2018 Grenfell Tower fire, which took more than 70 people’s lives, 20-year-old Beckham and his brothers Romeo and Cruz volunteered to sort clothing and food donations to help the victims, according to the Evening Standard. To take things further, Beckham, who had released his debut photography book, What I See, the year before, decided to donate all the proceeds from his photography exhibition at Christie’s to the children who lost everything in the fire.

Beckham’s fashion designer and former Spice Girl mother Victoria has definitely made an impact on her oldest child as an International Goodwill Ambassador for UNAIDS. In 2016, the two went on a three-day mission to Kenya with Born Free Africa and UNAIDS to raise awareness about HIV. Former soccer star dad David is also a UNICEF Goodwill Ambassador.

Last year, the Fifty Shades of Grey star made a bold move by posting a photo with her phone number on Instagram in an effort to advocate for women and reproductive health.

“Women and girls in every corner of the world face extreme violence and sexual harassment on a daily basis. Over 800 women and adolescent girls die every day because they do not have access to reliable contraceptives and basic maternity services,” the 29-year-old daughter of actress Melanie Griffith and Don Johnson captioned her post. She explained that she wanted women to call and leave voicemails of their stories so she could listen, compile and bring their voices to the world with help from Global Citizen, a community of people who are collectively working to end extreme poverty by 2030.

Johnson has also partnered up with her famous mom in the past to host a fundraiser to benefit the Action in Africa charity, which aims to help empower people in Uganda by fostering education and community development.

The late Michael Jackson supported dozens of charities and gave more than $300 million dollars over his lifetime to foundations such as Make-A-Wish, UNICEF and the Red Cross, according to HuffPost. Since his death in 2009, his two older children Paris and Prince have continued that charitable legacy.

The daughter of the late king of pop flew to Puerto Rico to help distribute supplies to families living in Aguadilla after Hurricane Maria hit in 2017. She also donated backpacks, personal water purifiers and solar lights to every child at the school located in the town.

Her brother was honored with the Motif Award Lifetime Legacy Medal of Honor, the nation’s highest honor in youth advocacy, in 2018 for his work with his Heal L.A. foundation, which was created to further the cause of his late father’s Heal the World organization. The idea to start the foundation came from Prince’s college friend, John Muto, who was inspired by Jackson’s philanthropic work, according to ET. The organization is working to end child hunger, homelessness and abuse throughout the greater Los Angeles area.

During his inspirational acceptance speech, Prince vowed to continue his work and emphasized that “change begins within your own community,” ending his speech by saying, “so let’s heal Los Angeles and heal the world.”

After losing her father Robin Williams to suicide in 2014, Williams honored her dad’s passion for cycling by donating to causes that were close to the late comedian’s heart. Along with brothers Cody and Zachary, she donated 87 bikes from her father’s collection, auctioned through Paddle 8, and donated the $600,000 in proceeds to charity. The money went to the Challenged Athletes Foundation and the Christopher and Dana Reeve Foundation.

Williams, 29, has also partnered with The Hope and Grace Initiative to help end the stigma around mental health. She even shared her own testimony on the subject to join in on the conversation. “As for how I am, REALLY, I take it day by day. Some days are great. Some days are nearly impossible. But the great days, the fact they can exist at all, make navigating the hard ones that much easier,” she wrote on Instagram. She concluded her post by pleading, “This month, join the conversation. Ask those around you. And most important, listen. Because everyone is fighting something, whether you can see it or not. But they shouldn’t have to feel like they’re fighting it alone.”

This self-made billionaire and youngest child of Kris and Caitlyn Jenner decided to change it up for a good cause for her 20th birthday. Jenner partnered with her friend and cancer survivor Harry Hudson to support Teen Cancer America, an organization that raises awareness and funds for teens and young adults who have been diagnosed with cancer.

In a video the organization released online, Jenner announced that on her 20th birthday, which was Aug. 10, 2017, a portion of the proceeds from kyliecosmetics.com would go to organization. Hudson spoke further to give a little background on why this charity is meaningful for him and how the youngest Jenner was using her hard-earned funds for good: “Kylie was by my side through all my cancer treatments and together we’re spreading awareness through her products today, on her birthday,” Hudson explained in the video. “So buy the products, support a cause and do something positive.”